Building on its ground-breaking history of championing public art in Hong Kong, The Peninsula is once again celebrating the power of creativity this spring with the launch of its fourth annual “Love Art at The Peninsula” programme.

The initiative, which highlights the iconic hotel’s strong connections to the city’s cultural and artistic landscape, is this year spearheaded by renowned conceptual artist Sir Michael Craig-Martin RA – also known as “The Godfather of Brit Art” – who will be presenting a new site-specific installation to mark the third year of The Peninsula’s collaboration with lauded British cultural institution the Royal Academy of Arts.

The brand new sculptural work by Craig-Martin, Bright Idea (2016) will be on display at The Peninsula’s forecourt from 20 March to 31 May 2017, and its unveiling has been timed to coincide with the fifth edition of Art Basel in Hong Kong. The striking work – a four-meter-high, bright yellow light bulb constructed from solid, high-tensile, powder-coated steel which has been created using a computer-controlled water-jet-cutting technique – appears to emerge from the fountain, creating an eye-catching spectacle, while challenging the way common objects are perceived by changing their dimensions and setting.

Bright Idea turns the concept of conventional sculpture on its head. Featuring lucid lines that clearly demarcate it from its surrounding environment, the work was envisaged as a sculpture of a drawing, rather than as a sculpture of the object itself. The largest sculpture of its kind created by Craig-Martin, Bright Idea was conceived to stand out against the hotel’s towering façade in terms of colour and scale. The setting allows viewers to look through the transparent space within the object from either side of The Peninsula’s forecourt, allowing the work to interact with varied backdrops depending on the perspective; offering multiple viewing experiences from different angles. 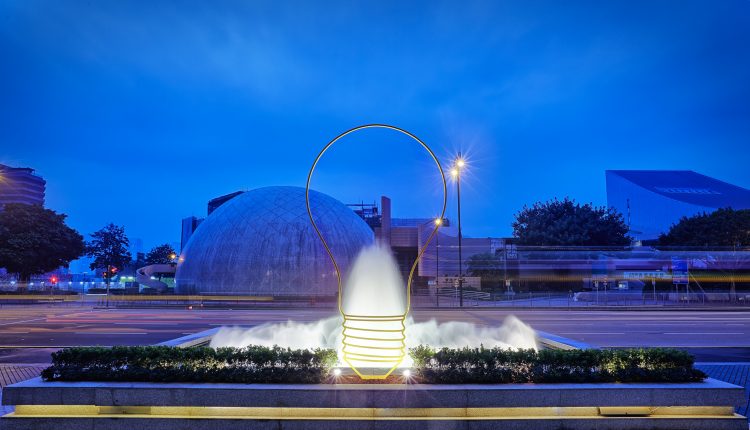 Relax as your children explore the beauty of Lizard Island

Win a dream trip to Tokyo