Few would look at a 1940s vintage house in the fashionable residential San Isidro area of Lima, Peru – two floors and nine rooms total – and think that it could make a luxury hotel. But entrepreneur Ignacio Masias took up the challenge when the 94-year-old owner of the building said “please look after my house to stop it being developed into apartments or something” (in Peru, buildings are automatically inherited by all descendants). Ergo, clever Ignacio Masias, with the help of his designer sister Sandra Masias and their mutual friend, architect Jordi Puig, was able to open what is the Atemporal (‘timeless’) boutique hotel. The first guests arrived August 2016 and the hotel is the only entity in South America to appear in Condé Nast Traveler‘s best-new list for 2017.

Atemporal gets a consistent five in TripAdvisor, with reviews saying “this is a home away from home, except I wish my home were like this”, and similar praises. The nine rooms are frankly tiny but they maximise space so cleverly. Mine had an end wall of mirrored panels: slide them across to reveal a shower, three feet wide, and, the same width, a toilet and basin. Instead of a safe, there are two locking drawers under the bed frame. No minibar? Never fear, a 24/7 hot and cold beverage corner, with office and library elements occupies the landing at the top of the 20 stairs up from the ground floor. There is another such set-up, with honour bar, on that ground floor, in the all-purpose living room just behind the main entrance lobby.

I took one of the hotel’s two persimmon-coloured city bikes for the 10-minute ride along Santa Cruz street to the coastal road along from San Isidro to Miraflores. Signposting is really clear and Ricardo Garcia, one of the two charming main reception managers, recommended I ride on the pavements. It was a great ride as Santa Cruz seems to host side-by-side superior beauty and aesthetic establishments, with a bit of yoga thrown in, plus a Wöng supermarket that makes David Jones, Harrods Food Hall and Whole Foods look like Walmart. The assistants are all in scarlet uniforms, the women in matching lipstick and bun rings for their super-neat hair.

I could have taken one of Atemporal’s city-wide hotspot WiFis (free, like international calls in the hotel itself). I could have asked for a lift in the courtesy Mini Clubman and I could have read the hotel’s books, on any subject under the (currently hidden) sun – generosity abounds.

Early evening, I joined other guests for complimentary wine tastings and a tutored lesson by Ricardo in the seven types of Pisco. You can have light meals here, any time day or night, but I was going out for dinner with Ignacio Masias, inspirational as ever. We went to his earlier Lima hotel, Hotel B, originally to be Hotel Barranco but an hourly hotel had taken that name. Since he had already had a large B painted on that 1914 vintage edifice, that stuck. Now owned by the de La Puente family and, if anything, over-filled with art, I found Hotel B rather overkill and could not wait to get back to the relaxed luxury of Atemporal.

Atemporal is so comfortable, it moulds itself to what YOU want and I love the way Ricardo, after decades of formality working in hotels in the US, is now so obviously comfortable clad, like his nine colleagues, in a loose dark jacket and chinos, a white shirt and white sneakers. There is no space for a gym, but I did a hearty hike around the locale before the complimentary breakfast, which is divine. I sat on a rocker on the back porch at a table set with pristine white linens and wood Peugeot salt and pepper mills, and Edwardian floral china from England. From the buffet I had masses of papaya and chunks of avocado with lime, and hearty slices of absolutely delicious home-made toasted wholemeal bread. Would I like eggs? Yes, please, and the sun came out, more or less the same colour as the yolks. 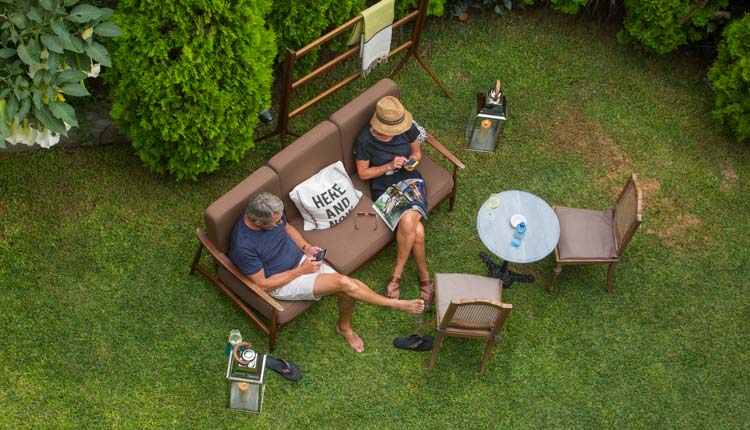