All resorts seem to have an unusually high repeat factor, which indicates that when Maldives-lovers find a location that suits them, they stay put rather than trying competitors.

My assessment says that LUX* South Ari Atoll, Maldives, offers exactly the luxury that today’s aesthetes appreciate, and even though it is a top honeymoon destination, there are still about 20% repeats. Like all top resorts on the islands, LUX* has its own dedicated lounge at the airport’s TMA floatplane terminal to wait in until the intra-island Twin Otter flight is called. The LUX* lounge is sensational, with big windows (some resorts’ are internal, without windows) and the food product is thoughtful, even to the extent of green tea sandwiches (crusts off, of course).

I was in overwater villa 140, a Temptation Suite, which certainly lived up to its name. Incredibly hungry, I ordered room service lunch via the curved-screen Samsung. My linguine aux fruits de mers arrived and was carefully placed in the air-conditioned dining room that protrudes one side of the inside area (the other holds a circular Jacuzzi-type bathtub). Looking down through a window in the floor at big, blue fish cavorting in the water below was the scenery that accompanied the dish.

This is heaven for aquaphiles. The ultra-creative GM, Jonas Amstad, is obviously a frustrated inventor, with a bit of Swiss sculptor, Jean Tinguely (1925-1991), about him. He has put hammocks in shallow areas off the sandy beaches, as day-long families swim, laze and snorkel or take trips with the resident marine biologist, Mark, from North Wales. However, I wanted to further appreciate my being here, so I took my somewhat antique push-bike along to the spa, which has four overwater villas. I looked out to the sea, as Evi from Bangkok first did a lemongrass scrub and then a LUX* facial (all LUX* products are specially composed by aromatherapist Shirley Page, from Mauritius). I then pedalled a few more metres to the LifeFitness gym, in a highly productive vegetable garden. As darkness consumed the sky, my evening surroundings consisted of a really good Filipina singing in the bar next to the overwater Japanese restaurant, Umami. Those who are on all-inclusive deals, which means about 40% of all guests, do pay a bit extra to dine here, but not surprisingly, the restaurant was filled.

Sashimi and vegetarian tempura and homemade tofu went with glasses of LUX*’s own Scrucap wines, chosen by South African oenologist Kent Scheemeyer. Sadly, we did not have space then to visit ICI, the ice-cream kiosk which offers free ice-creams and sorbets, all homemade, all day, every day. There are many diverse restaurants here, including Italian, and Arabic-Indian. I breakfasted at the international Mixe and then admired the lobby barista station, next to the glass-walled working coffee-roasting room. Unsurprisingly, like all LUX* luxury hotels, red London telephone boxes are dotted around, for free VoIP calls worldwide, but I found that the photo-shop station that Jonas Amstad has installed in the unisex washrooms is unique. The hotel’s art studio on the beach includes such examples as a sofa made out of an old bathtub, with one long side cut away. Whatever will this crazy Swiss inventor come up with next? All I know is that – citing, as always, quality rather than quantity – I really did feel miles better for having experienced this aesthetically appealing place. 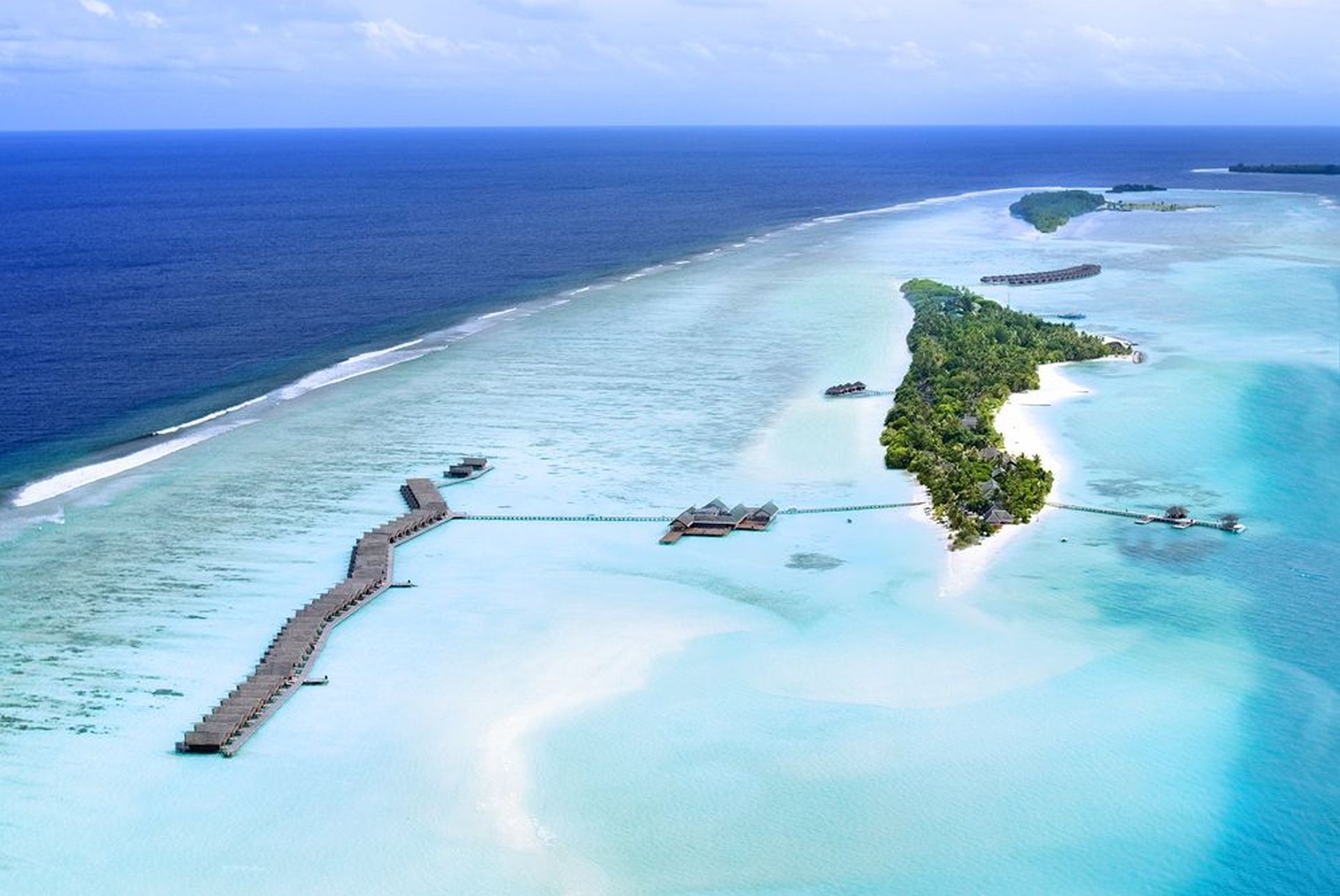 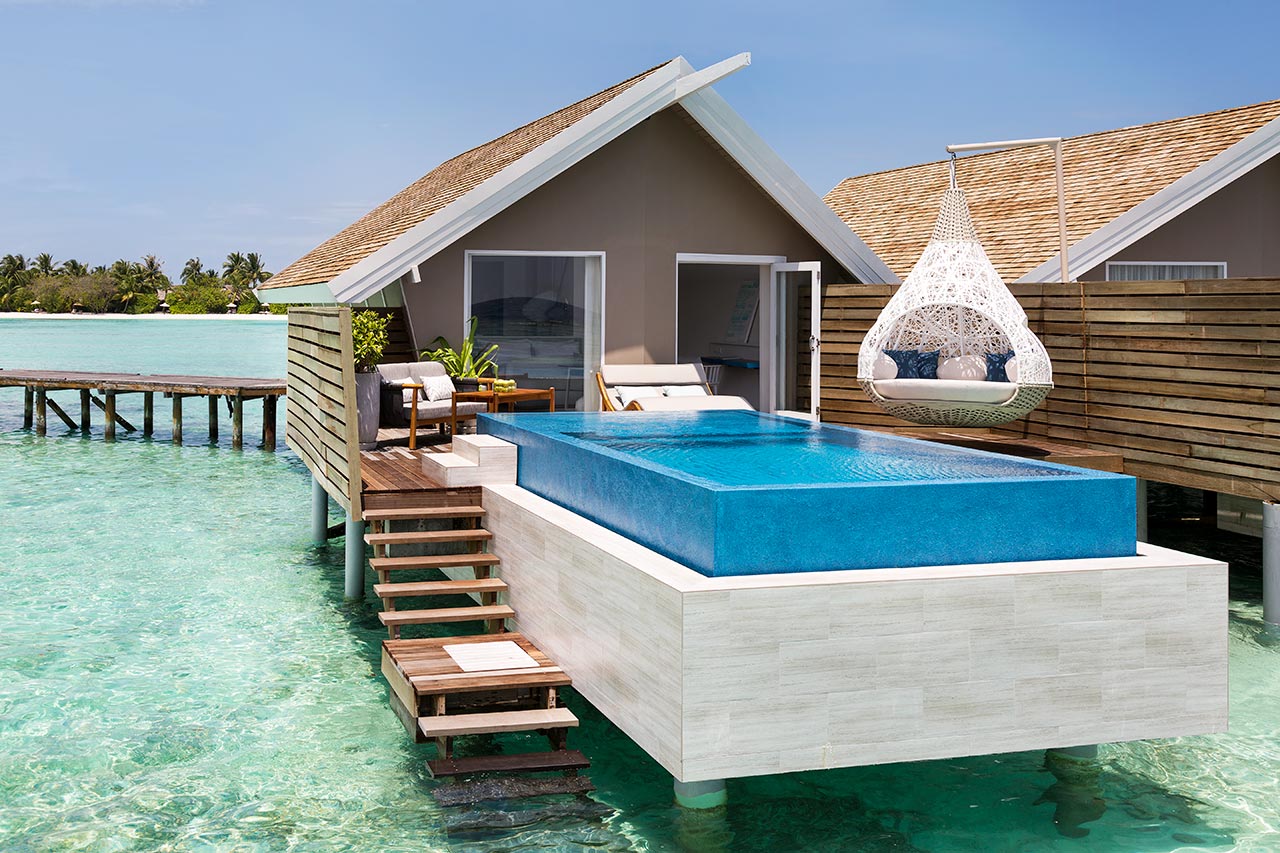 And now, if you really want real luxury, turn to Renato Chizzola, GM of Cheval Blanc Randheli Island, Maldives, and in charge of LVMH’s Le Cheval Blanc brand for the Middle East and eastward to the Pacific. He learned luxury, he says, at an early age, working in a restaurant when he was only 12 back home in Salzburg; later he learned oh so much at Hotel Sacher in Vienna. And then he coped with all the super-wealthy on The World of Residensea, and now, here in the Maldives, he has oligarchs worth $13 billion or so, according to Forbes, mooring a Philippe Starck-designed superyacht conveniently near to land so, says the gal, they can pop ashore for a spell in the spa or perhaps some of the world’s best French foie gras followed by Kagoshima ribeye.

Those who stay here in one of the 45 villas, all designed by Jean-Michel Gathy, are in for a treat. The cathedral ceiling soars up, and two sets of vertically rotating screens can divide the entire 24-metre length into three separate rooms, living room, bedroom and a large bathing area where luxury includes five different types of bath salts and Garnier-Thiebaut towels, all with the Cheval Blanc horse-head logo, of course, that really do dry you. Luxury is also having a soft padded mat – taupe to match bedlinens and leather covers for drinking water and the ice bucket – a mat that is put on a long shelf to protect both it and my wheelie, which conveniently is Rimowa, now 80% owned by LVMH.

Luxury always wants something new, says Renato Chizzola, who in the last couple of weeks has added a pétanque court and a flower garden to the estate. On the food side, additions include a stunning outdoor teppanyaki table, C-shaped and hosting up to 12. The set menu that night was salted edamame, hamachi sashimi, foie gras with mixed mushroom and miso mirin, local lobster with spring onions, carrots, coriander, mayo, crispy leeks, and then garlic-topped cubes of that ribeye with garlic fried rice, finishing with coconut mochi ice-cream. Renato Chizzola, knowing that luxury includes knowing, where possible, exactly what your guest likes, had already chosen Chambolle-Musigny Premier Cru Les Charmes 2011 Domaine Christian Clerget.

On the way back he drove me, in one of the new retro-look taupe buggies, to see the cabanas that have been added to the main pool. But my pool was addictive, right outside the full-wall windows of my villa. The temperature was perfect, the privacy complete. Having breakfasted off Ferme de Peuplier yoghurt and magnificent homemade wholewheat toast, I pedalled over to the Technogym on one of my two city bikes (luxury is the taupe fabric ‘shower caps’ covering their metal baskets). Actually luxury is the word that justifiably comes to mind frequently at this hotel. Next, says Renato Chizzola, will be a full-sized soccer field (he already has two tennis courts, plus masses of boats for diving and snorkelling, and one of TMA’s Sea-Otter seaplanes is branded for Cheval Blanc). Luxury, as he says again, is giving more than expected. Last Christmas, when he had, as usual, 50% repeats, he made some of the buggies into a Santa train for the kids, all of whom, on New Year’s Eve, carried their national flag, from Australia through to Ukraine, to join him on stage for an international salute as the clock chimed midnight. 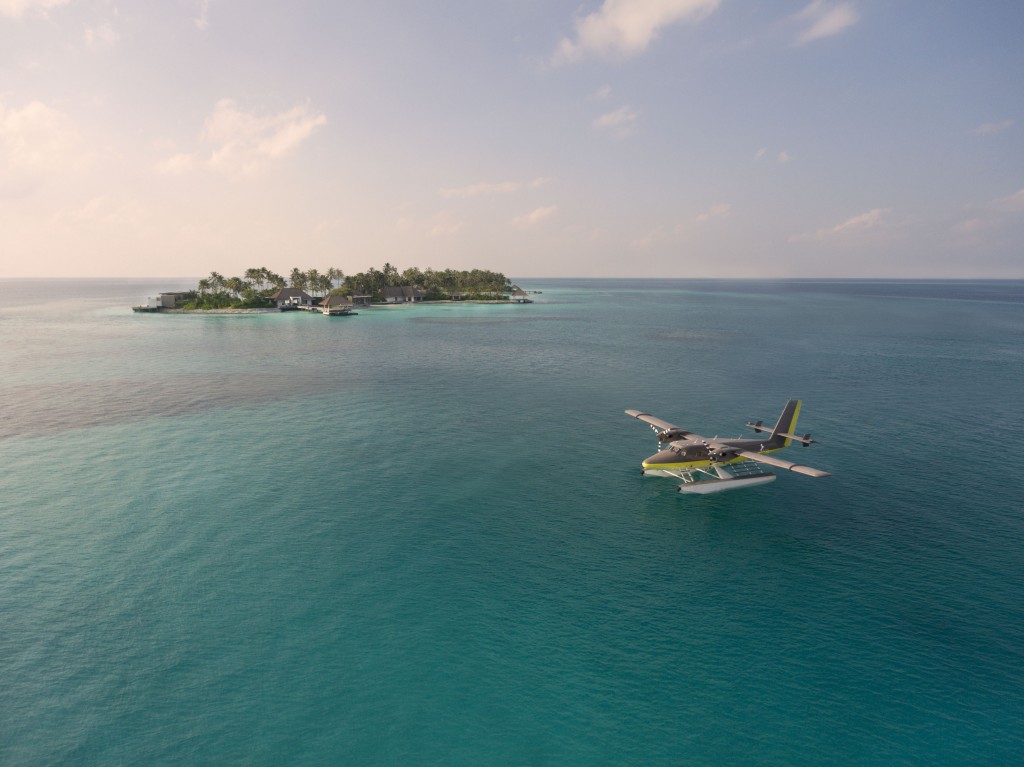 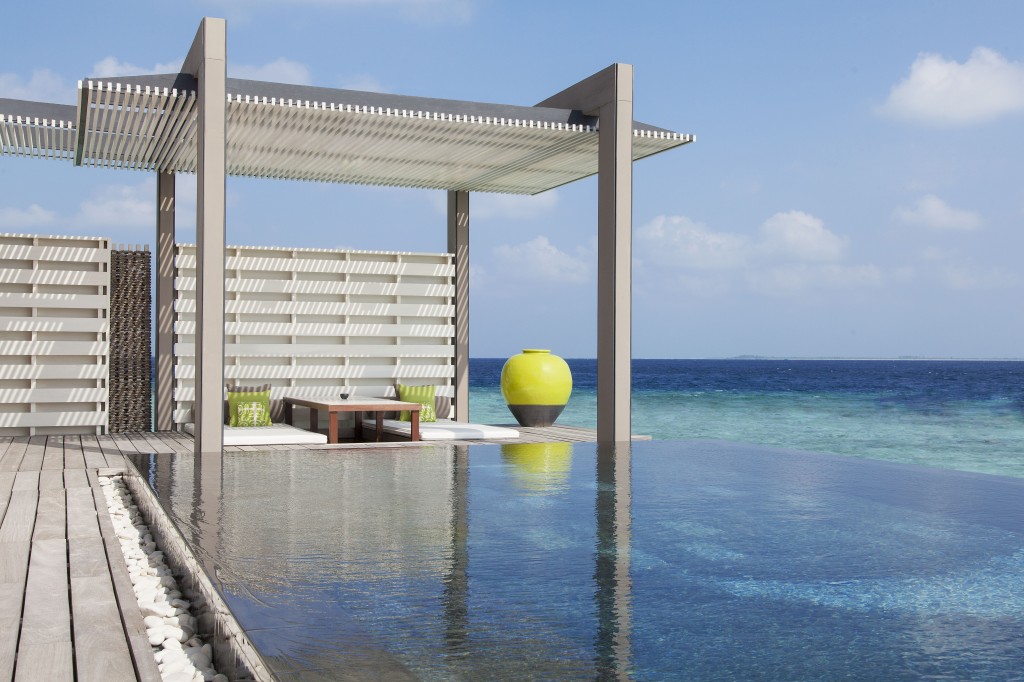