Sydney's cruise infrastructure turmoil leads CLIA Australasia to wonder what could have been.

This month six years ago when Cruise Lines International Association (CLIA) Australasia said it was on target to reach a goal of one million local cruise passengers in a calendar year by 2020, Carnival Australia matriarch Ann Sherry made an off-the-cuff remark that the figure was more likely to be two million given the growth trajectory of the burgeoning sector.

When CLIA Australasia’s goal of one million passengers was surpassed in 2014, Sherry’s pipe-dream of two million cruisers suddenly moved within the realms of possibility. Even on the verge of certainty.

It’s no secret this region has witnessed astronomical growth from the cruise sector over the past 10 years. Since 2008, cruise passenger numbers have risen by an average of nearly 19% per annum and have more than tripled since 2010 alone.

At that time, and to support Sydney’s thriving cruise scene, talks with the Australian Navy appeared to be heading towards a favourable outcome over shared use of Garden Island, bringing the magic mark of two million within grasp.

However, turning to present day, and after years of setbacks, ongoing case studies and reports, Sydney’s alternative cruise port on the eastern side of the Harbour Bridge still has no solution, to the detriment of Australia’s cruise tourism industry.

Yes, there have been some wins of late, including the creation of a cruise industry reference group headed by former NSW Liberal leader (and senior naval reserve officer) Peter Collins, and most recently the Federal Government pledging $300,000 to develop infrastructure options. But the delays have taken their toll in the form of up to five potential homeported cruise ships in our waters being turned away, it was revealed last week when the Ocean Source Cruise Market Report was released.

CLIA Australasia admits the benchmark of two million by 2020 is now unattainable, but hasn’t stated a revised target. 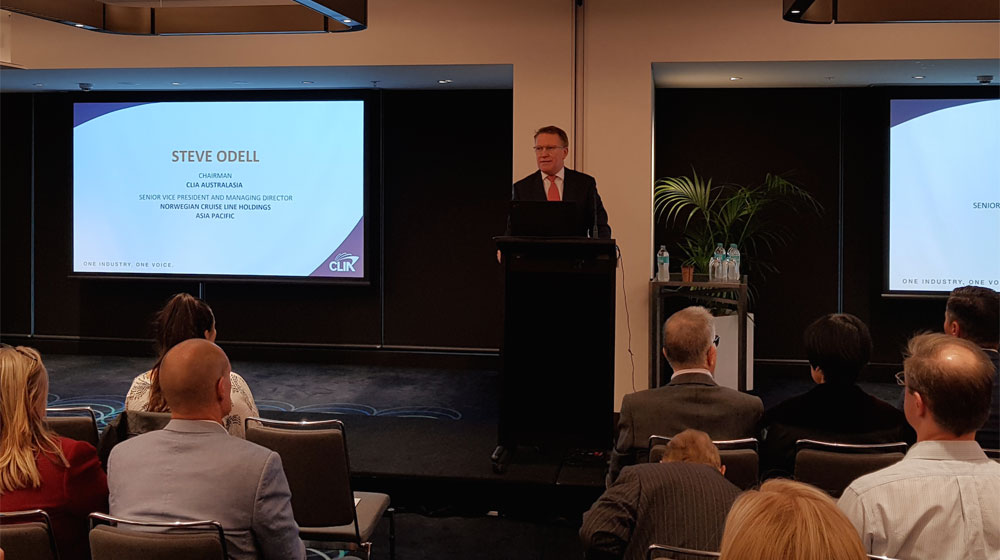 “The warning bells are ringing ever louder. We talk about it every year, but now for the first time, we are able to see the impact of it. We’ve been warning this for years,” Odell told CLIA members in Sydney.

“The local industry faces a lot of constraints for growth because of the lack of infrastructure right around Australia as well as the regulatory policy that hinders the development of domestic cruising. Resolving these infrastructure constraints and ensuring the right regulatory settings can be achieved is still the main priority.”

“With cruise tourism in neighbouring Asia still growing at an impressive rate due to the sharp increase in volume from China, it’s critical that Australia ‘future-proofs’ cruise tourism to avoid losing the potential capacity,” Odell remarked.

He said that with demand for cruising at record highs – about one in every 18 Australians – the best way to future-proof the industry was to resolve “infrastructure constraints” and ensure regulatory rules permit more cruising to local ports.

“Correspondingly, tens of thousands of passengers are embarking and disembarking locally and there’s a flow-on impact to everything else around us – hotels, restaurants, transportation – and not forgetting all the Australian suppliers, large and small, who provide food, beverage, fuel and other supplies to cruise ships homeported and visiting our shores.”

Odell lauded the Federal Government’s funding commitment to investigate new sites for a third cruise terminal in Sydney, referring to it as a “major, major step”.

“This is recognition of the growth of the cruise industry and the significant contribution that cruise delivers to the Australian economy. By addressing capacity constraints we have the opportunity to ensure that the industry will continue to grow,” he added.

“We want to grow faster, and we think we can.”

“Whilst infrastructure constrains how we may be inhibiting growth, we are certainly seeing the demand from Australia passengers for cruise business remains unabated.”

While referring to 2017’s increase in cruise passenger numbers as “rewarding” he was forthright saying “it will be difficult to increase momentum, and I think we are beginning to see that”.

“Attention has to be paid to the infrastructure issue. It cannot be underestimated,” Odell warned.