British Airways is investing $8 billion Australian dollars on a multitude of brand new aircraft, including the carbon-composite Airbus A350 and Boeing 787 Dreamliner, along with upgrades to the airline’s existing fleet, in-flight product, lounges, catering, wi-fi and apps.

Can you tell me more about the investment British Airways is making in its fleet?

We’re in the process of a big investment across the organisation. In terms of dollars, it’s more than $8 billion Aussie overall. We’ve got 72 aircraft coming just this year – it’s a huge amount of new fleet. That will comprise a mix of long-haul, short-haul and new types of aircraft including the A350 and 787-10 Dreamliner. For our European flying – our short haul operation – we’re bringing in the A320NEO/A321.

A substantial part of the investment is around the fleet but we’re also looking to invest a lot in the existing aircraft we operate. That will incorporate complete refurbishments of some of our existing fleet to bring everything up to the standard we would want it to be today.

Around $1.1 billion is focused on Club World. We are taking what currently is a really solid sleep proposition and making that outstanding. We’ve signed a partnership with The White Company (which some people in this market are familiar with already) but it is becoming a more and more known brand. The White Company is a very high-end, luxury British lifestyle brand that focuses on bedding, silks, pillows, duvets, blankets etc, usually for the home, but we’ve now taken that into the sky. Our partnership will see great, big new luxury pillows in the cabin. If you go back a few years and you think about airline pillows, they weren’t like the pillows you are experiencing at home, but I think now we can say there are. The offering also includes duvets and mattresses that go with our already comfortable flat bed in Club World, to make sure that on these long trips people are having the rest that they need to arrive fresh.

We’ve just brought that on to our Australian route in the past couple of weeks and early feedback is very positive. That’s available up to Singapore from Sydney on our afternoon service, and then on the longer overnight onto London. In the opposite direction it’s the two overnight flights, so our passengers are really able to maximise that rest with us onboard.

Can you tell me more about the arrangement with Do&Co? What does that involve? 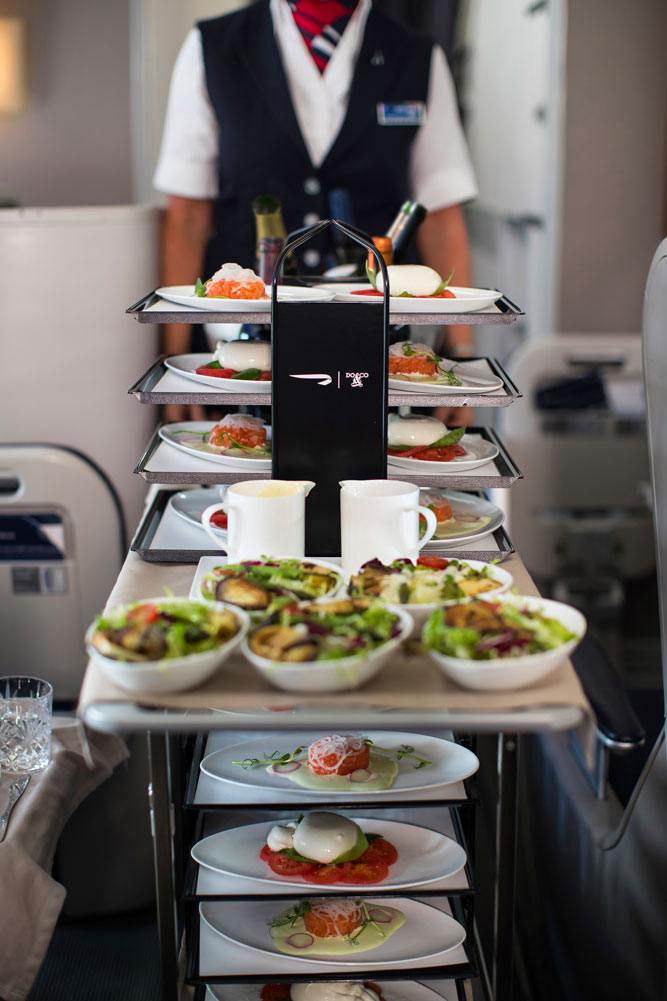 The partnership with Do&Co covers some of the change in product that we’ve been making on the catering side in Club World. In addition to the sleep proposition, one thing that we are rolling out progressively this year is a new catering proposition throughout the aircraft.

For Club World and the Business cabin we’ve really been looking at shaking it up and make the catering onboard our longer flights a more interesting experience for the customer. What we’ve done is introduced a way of presenting entrees, desserts, cheeses etc to the customers before they actually select. So rather than just having a menu and a written description from which Club World passengers can choose to eat, we are taking advantage of the travelling time. Passengers can now view their options and see what they might want to choose, and Do&Co have been a part of that development.

In addition we have been changing some of the catering in other cabins on the aircraft and making sure that customers sitting in World Traveller (our Economy cabin), are thoroughly well fed. Additional ice cream, for example, during the mid-flight period when people are just looking for something to snack on. Everybody is different when they fly, but I think generally people enjoy being ‘wined and dined’.

Is British Airways making changes to its in-flight wi-fi technology?

We’ve really thought long and hard about this and we’re bringing in the latest generation of wi-fi because we want customers to be able to stream. I don’t think it’s a case of people just wanting to have a look at a quick message. People want to be able to enjoy our entertainment and we have to make sure that we’ve still got the latest and greatest options on our own entertainment. But at the same time, if you’re in the middle of binge watching something on a streaming channel, you’ll want to be able to view that in the air tour. That’s all coming out too. It is in the process of being rolled out now and should be completed by the end of this year.

Why do you think wi-fi is important on flights?

I think the majority of people want to stay connected, but beyond that it’s become an expectation that one is connected. I would say that we are moving into a world where to not be reached still has to be a choice that you make and the choice and that the facility is there if you want to use it.

Beyond being reachable, so much of our entertainment world now comes from streaming and that is what we are happy to offer customers. No matter where you are sitting in the aircraft, you want to be able to stream, able to plug in your devices, able to charge your devices, and those are the things we are making sure that we’ve got kitted out across the long- and short-haul fleet.

What about the hardware in Club World? Is that set to be revolutionised as part of the investment?

Yes it is. Our new Club World seat – I can’t say a lot about it –but it will progressively come out next year. It will debut with the launch of the A350 into our fleet. It will have direct aisle access. That’s something that customers have told us that they want, but beyond that, more details can be expected in due course.

Why is Australia so important to British Airways?

We’re the only European carrier that still flies between Australia and Europe. We have a daily service from Sydney to London, but with the option to connect on two services between Singapore and London, including an Airbus A380. So there are lots of seats.

I think if you look at the historical links between our two countries there are very natural links, and always have been. And then when you operate an aircraft like we do with four cabins you look and you think there are big business links between the two countries, and there are a lot of people who want to travel because of work. We also connect a great amount of traffic that is coming from Europe through to Australia. A high number want to come down here because of leisure. Likewise, lots of people from Australia want to go on extended trips through Europe so it’s right that we connect the two places. And each time we expand our network we offer more and more possibilities for consumers here.

Beyond Sydney, would BA look at the opportunity to go into Melbourne, or perhaps Perth?

We’re always looking at the network. That’s part-in-parcel with what we do. At the moment we’re flying through Singapore between London and Sydney.

Speaking of Singapore, is BA seeing a lot of traffic break their journey in the Lion City?

It’s a mix. I’ve been living in Singapore for five years. I think a lot of people want to stop there. Either it’s a friend or relative or a business association they have there, so we do get a lot of people saying they are going to break the journey because it’s a great place to do that.

Changi Airport is a destination itself – it provides a seamless and enjoyable experience and is an oasis of calm. It’s a phenomenal airport and we’re extremely happy to take our customers through an award-winning facility. BA is comfortable to be able to offer customers that seamless proposition. If you are making an ultra-long haul trip and the middle part of the journey can be taken in a relative amount of tranquillity, then that’s a win.

Customer feedback for us is that it is exciting yet calm place to transfer.

We also opened a new lounge at Changi Terminal 1 some 18 months ago. We’ve made sure that it is extra comfortable – more space for people, more room and great shower facilities for freshening up on that ultra-long haul journey. But in addition we’ve also opened a Concorde Bar there. We have a Concorde Room at Terminal 5 at London Heathrow, our home. We wanted to replicate that in some of our overseas markets, and Singapore was the first location. We’ve opened the new lounge off the main facility in Singapore for First customers. It’s absolutely state-of-the-art, very comfortable. it is similar to relaxing in a cosy living room. It’s very private.

What connecting options does British Airways offer through Changi?

Passengers can travel on the A380 which operates between London and Singapore everyday. Guests on that flight who are connecting to Sydney have a little bit more time at the lounge. So if a customer preferred a slow transit to enjoy the facilities, then they’ve got the opportunity to do that, and just connect onto the 777-300 to Sydney.

Similarly on the way back. Both London flights from Singapore leave at similar times – you’ve got about 90 minutes to go and freshen up, have a drink, stretch your legs.

Besides the product, where else is British Airways investing their money?

Throughout. One of the key things about a big investment like this is that it’s not actually just about the moment you’ve stepped aboard one of our planes. We need investment in the booking procedure. Customers want a faster app booking mechanisms, faster on the ground and in the airport experiences and one thing that we opened just in the middle of last year was the First Wing at Heathrow Terminal 5. Our home.

That was really a huge investment that allows our First and our Gold Class customers to travel into London Heathrow and directly through security. Customers check-in, pass through security and go straight into our First Class lounge. This has been something that we’ve wanted to have for a long time and it’s a big part of the investment. To be able to bypass the main part of the airport and to go straight into the lounge, and relax, get themselves a drink, etc –it’s great.

10 Questions with… Serge Dive, CEO of This is Beyond