To share a bedroom with a pair of penguins may be, well, unique, but then Hotel Rangá in Iceland is a one-off in so many ways (walk into the intimate reception and you are greeted by a polar bear which, unlike the penguins, is real).  This is unforgettable luxury, a 52-room Small Luxury Hotel of the World which is owned and run with non-stop passion. 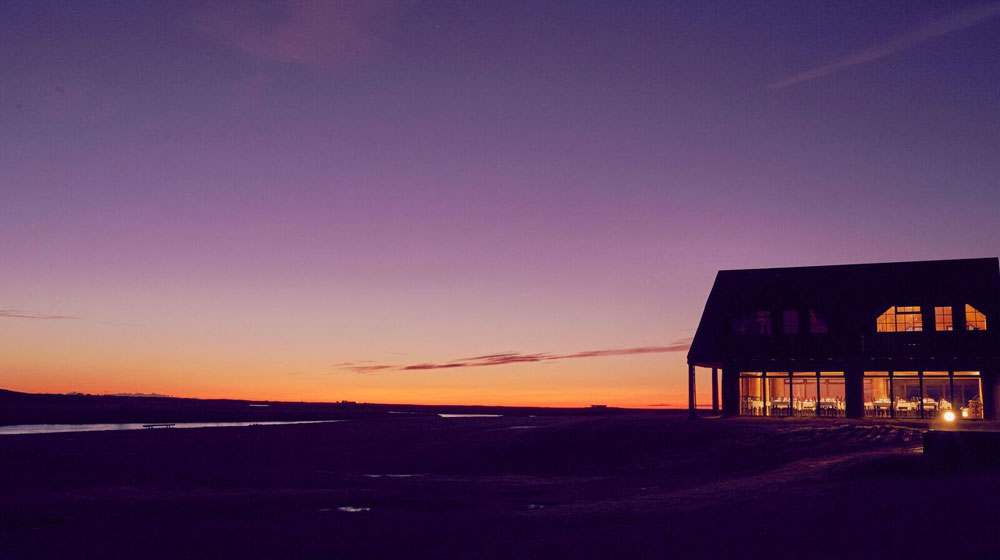 On this visit, my experience began by disembarking the warm sanctuary of Seven Seas Navigator: officers were there to see passengers off, there was lots of hugging and many were near to tears – passengers at least. But standing at the bottom of the gangplank was someone who quickly became a new friend, driver Jón Sigurdor Halldorsson. It would, he said, take about 90 minutes to get to Hotel Rangá, inland and eastwards from Reykjavik, in a lonely part of Suderland between Hella and Hvolsvöllur, but en route he proposed showing me things off the main road. The first stop was at Urrioafossfalls, on the Pjorsa river, fed from Tungnafelsjökull glacier. Then it was back to Highway One, a perfect two-lane road, with four-foot yellow markers at regular intervals to help drivers in blizzards (no problem with snow, says Jón, the ploughs are out quickly).

Like most Icelanders, Jón Sigurdor Halldorsson reveals he has changed his lifestyle – after decades of starting companies, he now seems not only well suited to, but really happy with the life of driver-guide. We turn off lonely Highway One, through the cowboy ranch-like outline of a gate being carefully painted by an octogenarian. The considerably younger – well, only by a few years, biologically – owner of Hotel Rangá, Friôrik Pálsson is, in a boiler suit, supervising. After nearly a kilometre drive along tarmac, single lane, with moss-covered lava either side as far as the eye can see, we get to the wood-frame hotel: sprawling timber-beam walls with green eaved roof, one end rising to double-height, comprising two floors. 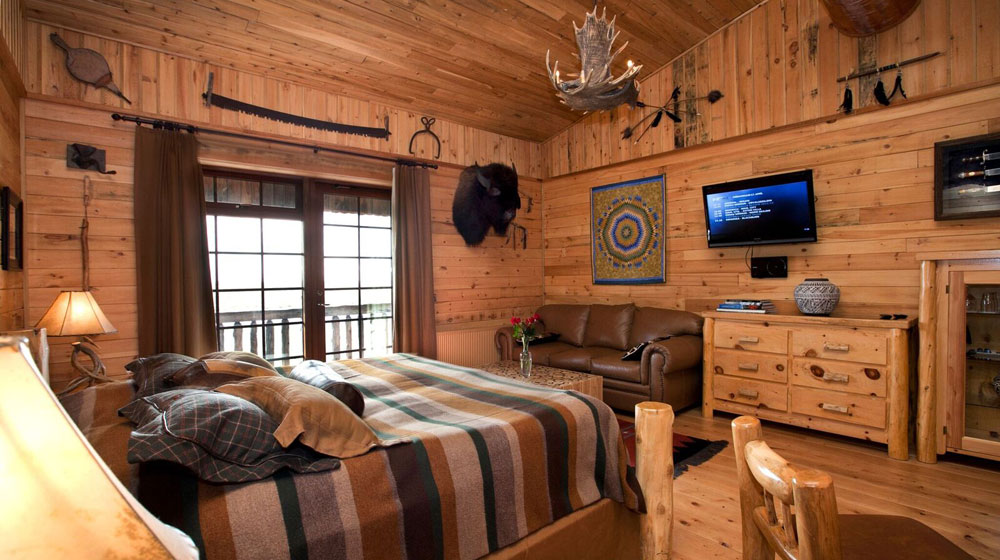 When Friôrik Pálsson retired from running a massive international company selling brandade, or dried cod, he spoke to a friend who, like him, owned a horse farm. The friend’s farm had lodging, with 21 bedrooms.  Would Friôrik Pálsson like to buy it? After a conversation, he was handed the key. Now, 15 years later, he has an unforgettable 52-room hotel, with several themed rooms. Room #60, Antarctica, at the end of the upper level, is certainly my favourite for its marvellous views down to the River Rangá (‘twisting’) which gives the hotel its name. Within, I was delighted by thoughtful features such as an Italian statement bathtub in the main room complemented by a bathroom-in-a-box with heated floors and wall-set electric rails, plus Eco toiletries. I must also mention a standing cheval mirror, in the main room, which adds 10 inches to your height and takes at least five kilos off your weight. At least, it seems to… 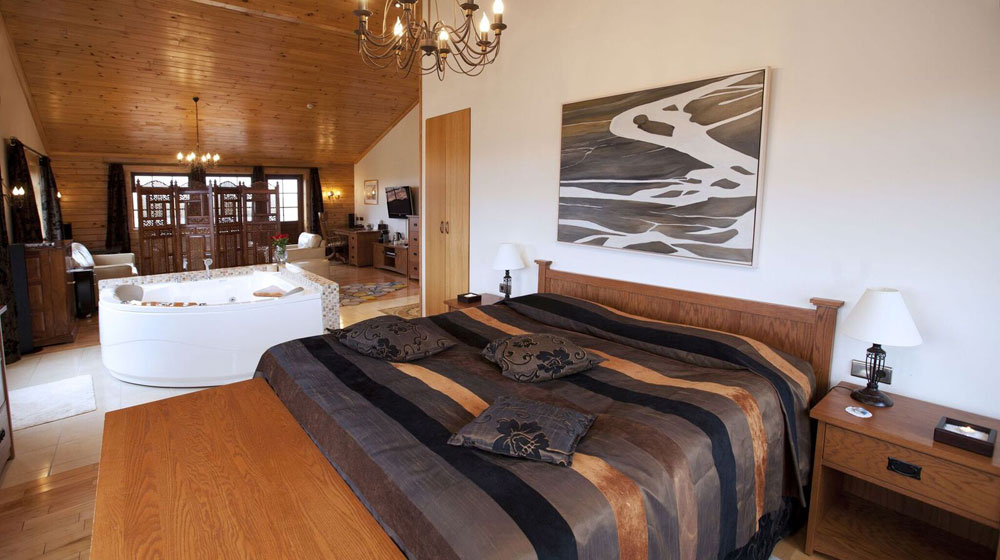 Friôrik Pálsson is, by the way, quite a character (I am using the English art of understatement). When he bought Hotel Rangá he knew nothing about running hotels, he says, let alone one that would eventually run at near 100% occupancy year-round. But having spent a couple of decades staying, while on business, in so-called luxury hotels in England and mainland Europe – places with all the bells, whistles and glitter but no service – he developed a strong idea of what he liked. His motto is: “Try not to say no, and give elements of surprise.” Examples of these surprising elements are seen in two bar stools which he found in Italy and, alongside the stuffed polar bear, are the most posted images on his ultra-busy social media. 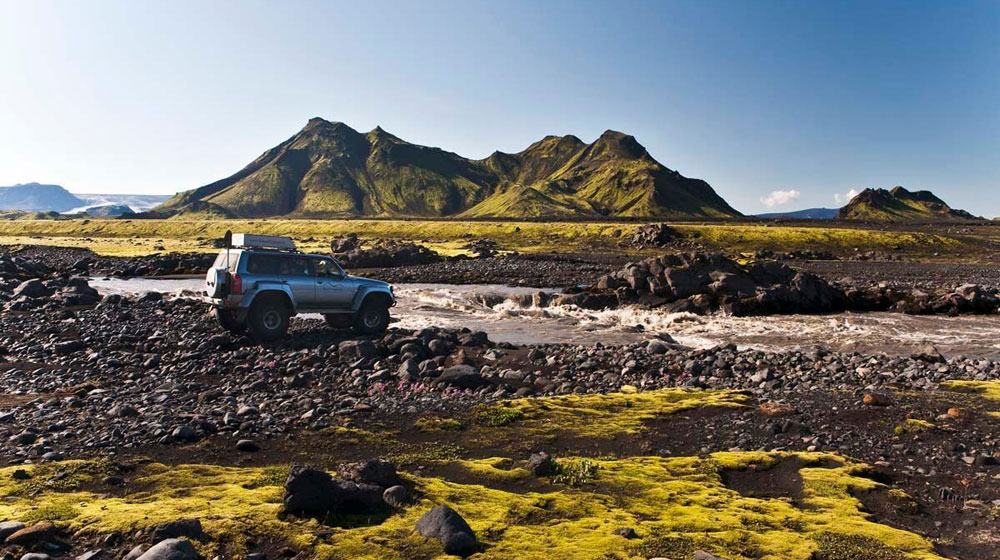 While he never reveals the names of guests,  Justin Bieber posted how much he loved the place, and the Kardashians (paying their own way) described how Kourtney was politely turned out of one of the three thermally heated outdoor hot-tubs at midnight; closing time is 11pm. Also, Bravo Television booked to shoot a whole episode of Real Housewives of Orange County here, which has brought a flood of reservations from the US, and not only from Orange County (the US now constitutes 65% of all hotel guests – the 52-room hotel runs at full occupancy for 10 months, with April and May dipping to 50%). Summer travellers stay under two nights, winter travellers for about four.

If I was to stay for four nights, I guarantee I would never tire of the food, which is entirely Icelandic and much of it supremely local. Head chef Bragi Pór Hanson somehow manages to produce artistic beauties that also taste sensational, working in a windowless kitchen barely bigger than the bathroom area of Bedroom #60. Do not miss the reindeer carpaccio, the Arctic char or the lamb. The homemade breads are addictive, as are the homemade ice-creams, of course with a shot of Reykjavik Distillery 64 Blueberry liqueur. 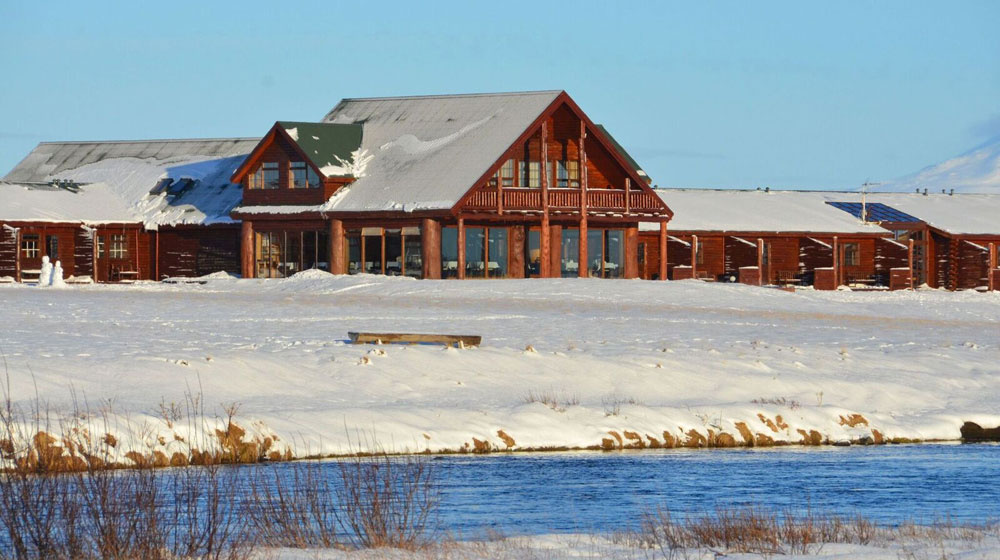 Daytime is quiet, but the hotel springs to life in the late afternoon. A Middle Eastern family with three kids return from a day-long helicopter tour. A Back Roads cycling tour, with three back-up vans and at least 12 cyclists, was about to check in. By early evening, the noise was supplemented by locals (well, from at least ten miles away) and by people staying in the nearest towns who had found out that the best food in this part of Iceland is served here, at Hotel Rangá. They did 123 covers at dinner, my night.

But since it can feel like a European winter even in midsummer in Iceland, what on earth is it like in an actual winter? I wanted to know. Guests come here to get away from the rat-race and stress. Year-round they can go horseback riding (Icelandic horses’ hair is hollow, for insulation), they can go winter-sporting, salmon fishing in the River Rangá, 274 metres from the hotel, and so much more. Choosing to stay in, there are those three thermally-heated outdoor Jacuzzis and, inside, great local art and a games room with a taupe leather Brunswick billiards table, Ravensburger jigsaws, chess and a good library (I borrowed a really funny book by Emma Thompson’s mother, Phyllida Law). Two bars are open 24/7, and three times a day, the restaurant offers outstanding food. 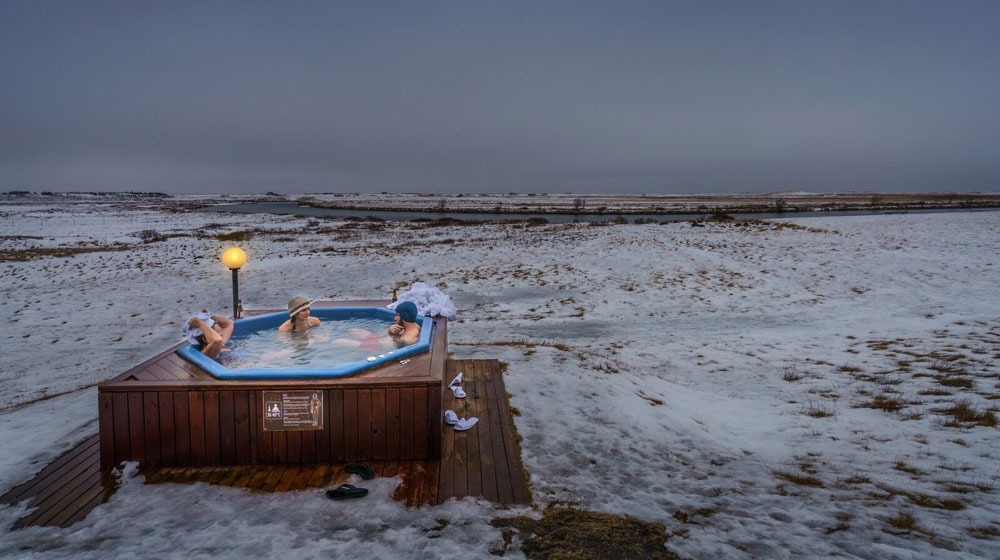 Breakfast is included in the room rate. Look out through the three all-glass walls forming the only decoration in the restaurant. Tables in the centre of the area become a magnificent buffet of international dishes paired with the truly Icelandic: J. Charpentier sparkling from France through to a bottle of Icelandic cod liver oil (complete with tiny shot glasses), ham alongside varieties of smoked fish and three flavours of homemade yoghurt. Or, there’s the national speciality, skyr, much like Russian smetana. There were more of those superb homemade breads and cakes and, a real favourite with anyone under 16, white china jugs holding one-portion sizes of batter to pour on to one of two griddles. Make your own pancake and then, if you are typical, cover it with chocolate sauce. 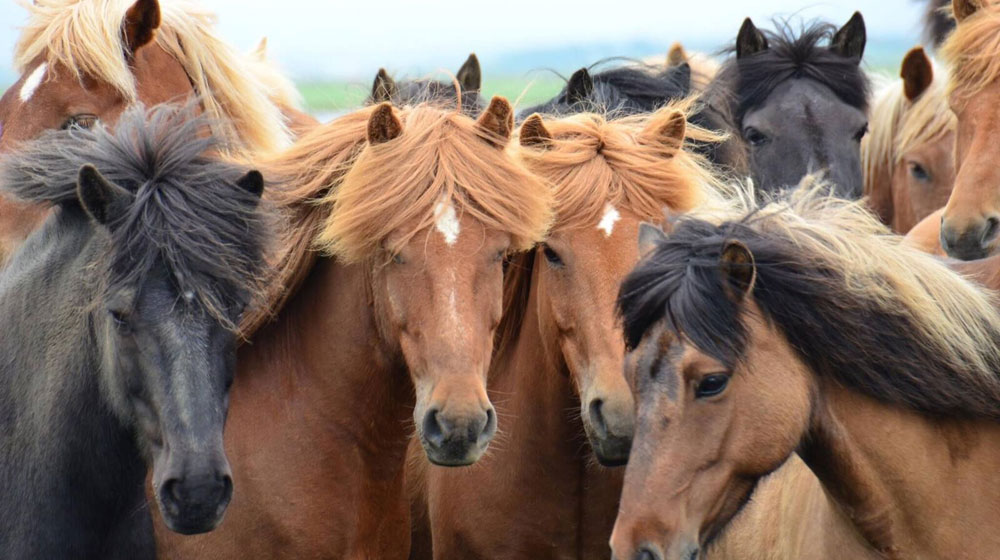 Excellent coffee is do-it-yourself from pump pots (I had a Nespresso machine in my room, by the way, as well as a tea kettle that lit up Day-Glo blue as it reached boiling point). But alongside all this feel-good-about-doing-it-yourself, bespoke main courses are offered, from omelettes with any three fillings – perhaps including hot-smoked local salmon – through to porridge with blueberries. Afterwards, I was in for another treat. “Come and see my observatory,” said Mr Rangá, also known as Friôrik Pálsson, the genius who owns this place. The aurora borealis is already a big draw card from November through to April and, deciding to capitalise on this, he worked with a professional astronomer to build a professional observatory – housed in a shed about 90 metres from the hotel. 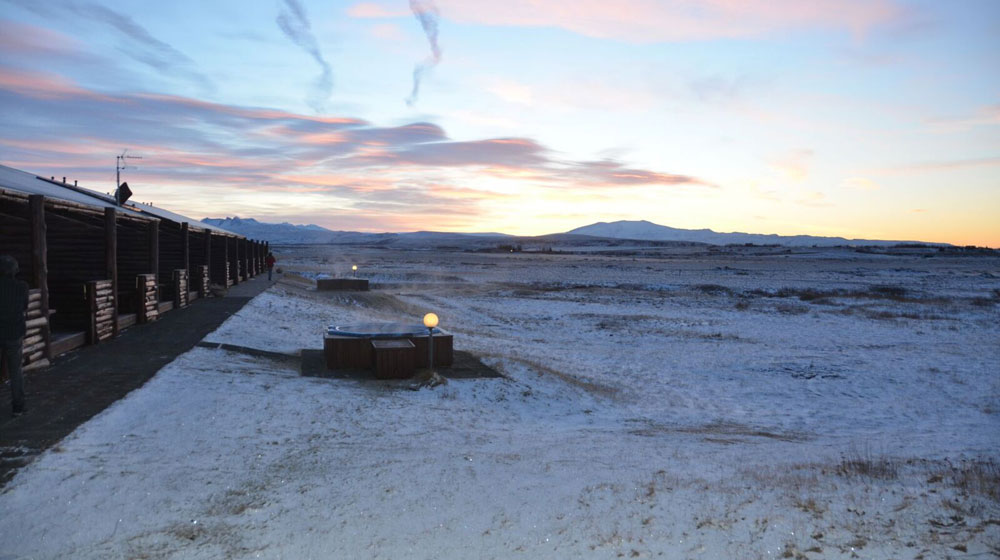 Ah ha, but the surprises continues. Inside the shed he showed off two of the most elaborate telescopes I have been privileged to see – they are so professional that a pair of NASA scientists who saw them have booked to come back and stay for an entire week in 2020. A simple switch makes the entire roof of the observatory slide back. Every night during the season there are professionally curated night-sky visits, free for hotel guests, at 9pm and 10pm. Nearly all guests also sign up for the aurora borealis wake-up call. If the hotel’s night manager sees the lights beginning, you are woken and encouraged to rush out, wrapped in blankets, just as soon as you can. His observatory accounts for at least 7% of first-time bookings, says Friôrik Pálsson, and that number is increasing with each passing year. See why this Small Luxury Hotel of the World is so unforgettable?