Every booking made in August earns farmers a bale of hay 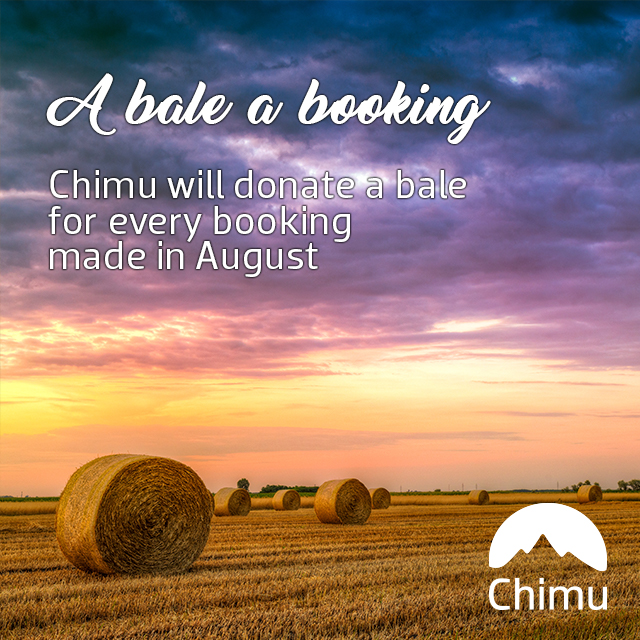 In a bid to show support for farmers impacted by the drought in Australia, Chimu Adventures has launched an initiative that will see the company donate a bale of hay through Rural Aid for every booking made in August.

Chimu Adventures is calling on the rest of the travel industry to follow its lead.

“As we are all aware, farmers across Australia are facing one of the worst droughts in history. The price of grain has risen while the price of stock has fallen and rural communities are suffering. The severity of the drought has led us here at Chimu to look into ways in which we can help,” the company said.

Rural Aid/Buy a Bale is a registered charity established in 2013. After reading about Queensland farmers who were being forced to destroy their cattle and abandon their land due to the conditions, Charles and Tracy Alder felt compelled to do something. Conversations with agriculture industry groups and a background in marketing led them to establish the fundraising campaign ‘Buy a Bale’ – a tangible way for Australians to help. Since September 2013, the campaign has delivered over 160,000 bales of hay across four states in Australia.

$20 buys a bale of hay and contributes to the transportation of it to affected areas. For the month of August, Chimu Adventures will donate one bale of hay for every booking made.

Chimu has also run fundraising voyages to the polar regions to raise much needed cash for Australian not-for-profit organisations such as the Mawson’s Huts Foundation, Love Your Sister and The McGrath Foundation.

“[We] are thrilled that we can help our travellers to support another local charity such as Rural Aid/Buy a Bale. We urge the rest of the travel industry to do the same and show their support for rural communities in Australia.”