Girlahead discovers if Ham Yard Hotel lives up to its reputation

London’s Ham Yard Hotel, right in the middle of Soho and two minutes’ walk from Piccadilly Circus, wins the trophy for the English capital’s most-decorated hotel, 2018. The unforgettable property’s GM Laura Sharpe is rated by the leading trade magazine CATERER as best GM in the whole of UK; the owning company, Firmdale Hotels, is best hotel group, says the same publication. On top of this, the 10-hotel Firmdale, led by its founders, real estate genius, Tim Kemp, and his designer wife, Kit Kemp, has gained the UK’s highly prestigious Queen’s Award for Enterprise, International Trade, 2018. The gal obviously wanted to see if such accolades were justified, and if Ham Yard lived up to its reputation.

The quick answer is yes, repeated again and again. This is new-luxury, 2018 style and beyond. The new-build opened in 2014, anchoring the renewal of what had become a slum alleyway linking Denman Street and Windmill Street. The 90-room hotel comes with 24 letting apartments: minimum 90 days, full hotel services. In what is now a highly desirable walkway are a Japanese restaurant, a traditional pub and six high-end retailers (you can get your hair done and buy Brazilian swimwear without having to leave the campus, so to speak).

This was my first visit and I had no idea what to expect, though I already knew Kit Kemp’s unique eye for design detail. The light, glass-walled lobby looks through to an inner conservatory. I immediately fell in love with two high-backed armchairs, both a kaleidoscope patchwork of colour. One of the eager young ladies at front desk, in brightest blue, checked me in and handed me over to a Bulgarian man. We could walk around the C-shaped building inside, he said, but in this glorious weather, it is best to go across the yard. This, being a weekend, was filled with happy hipsters enjoying the sun, sitting having drinks and something to eat. The yard holds several trees and a 3.6-metre-high bronze ‘collapsed roller-coaster’, Group, by Tony Cragg, 2014. 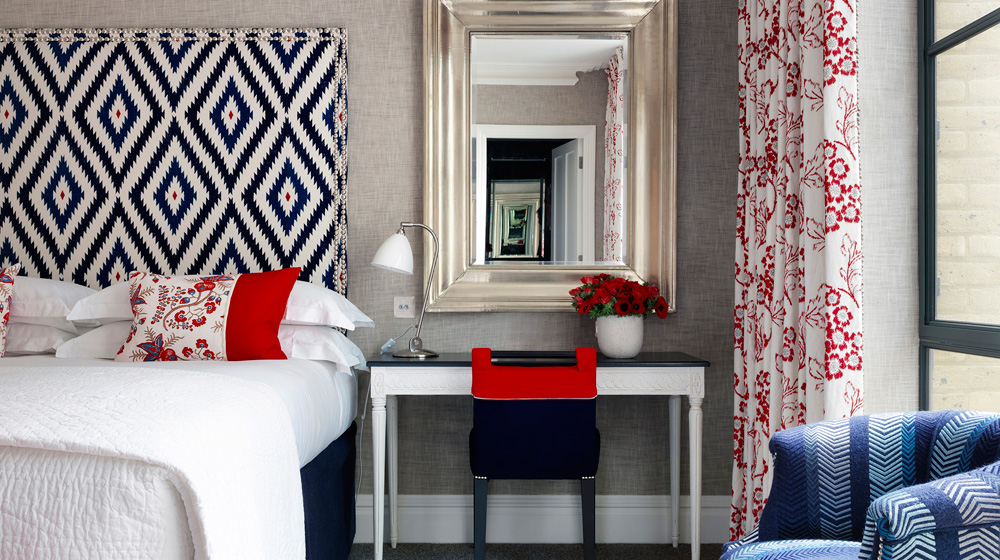 Up in Courtyard View Suite 127, I could look down on all this. Think satin-smooth oak or carpeted floors, big picture windows that open, tweed-covered walls and, in the bathroom, an electric rail for the Trada Linen towels and Kit Kemp’s own Rikrak toiletries. The glass-fronted, non-automatic mini-bar holds Krug and coconut water, and more. The simple Nespresso machine comes with exquisite whimsical china, Kit Kemp for Wedgwood. A unique plus here, for anyone who can read, is that the 15-metre entrance corridor has one entire wall filled with six bookshelves, ceiling-high. Chosen by Philip Blackwell, all are hardbacks. There must be hundreds. I borrowed three adjacent titles, namely 1494: How a Family Feud in Medieval Spain Divided the World in Half, Stephen R. Bown, St Martin’s Press, 2011; The Opium War: Drugs, Dreams and the Making of China, Julia Lovell, Picador, 2011; and George Washington: Gentleman Warrior, Stephen Brumwell, Quercus 2012. I was obviously in the ‘history’ section.

Later, after heading down to the basement gym (Precor, 24/7 of course, and with perfect fruit available even at 5am), I looked at a reception room off the lobby. This is a cosy meeting place, with two walls ceiling-high with books, and here they are categorised; Food & Drink, for instance, has a thick-thick book, What Chefs Eat. Leading off this lounge is a meeting place, table and chairs for three, and an honour bar, one of two that enables a cocktail lover to indulge at any hour. At which point, it is time, in this highly thoughtful and unusual hotel, to think about food and wine…

First, on the rooftop of this five-floor building is a divine terrace, with regular pop-up bars by the world’s top mixologists. Next to it, I found a full-scale vegetable garden, groaning with plump scarlet tomatoes and other goodies that will appear on the main menu downstairs. Next, the basement of the hotel has, in an equally clever way, been given over to events. There are three adjacent, but unique, meeting rooms. There is also a 190-seat tiered theatre, extensively used for film premieres (movie companies love this place: it has its own spacious bar). Next to it down here, too, is Croc’s, named for sculptures of three life-size crocodiles on one wall of the nightclub-dance floor; this too has its own bar, plus a four-lane bowling alley.

Main eating-drinking is in the 160-seat ground-floor restaurant that flows from both the hotel’s reception and its indoor conservatory; in summer, the dining area extends outside, on to the courtyard. From 7am on, it is justly popular (who said hotel restaurants do not work? Come and see this place – it had 200 reservations for dinner last night and there were also walk-ins). I had two absolutely superb meals here, both at the same inside corner table sitting on a tomato-coloured tweed banquette (favourite table, apparently, of Craig Markham, one of the founder team members, and Firmdale Hotels’ management never, ever, seems to leave). The crisp linens had been laundered by Firmdale’s own laundry: I had plain white Royal Doulton and, later, whimsical Kit Kemp-for-Wedgwood china and Peugeot mills, and thoughtful service led by restaurant manager, Markus Rossmeier, from Munich.

This is a restaurant where food is outlined on a simple card, printed on one side, while wines are suggested via a leather-bound folder. For the record, I tried two 2014 reds: a Pax Syrah, The Hermit, North Coast and To Bring You My Flesh, Domaine Ludovic Engelvin, Souvignargues, Languedoc (next visit I will try a Ham Yard Tonic cocktail: Portobello Road gin with Campari, St Germain, grapefruit bitters and home-made tonic). Dinner bread – warm brown or white mini-baguettes – were offered from a solid wood tray with butter and oil. I started with burrata and grilled fresh peach, with Beal’s Farm coppa ham and basil. Next came a 340-gram Dover sole (453-gram/16-ounce also available): on or off the bone? The side of courgette frites rolled in parmesan was so addictive that it alone would be worth crossing London for.

Others would return for the Ham Yard version of peach Melba, a plate with peaches, fresh raspberries, vanilla and raspberry ice-cream and fine-chopped walnuts. And I would be among those returning, any time, for the hotel’s breakfast, its bijou buffet offering some of the best whole-fat yoghurt in England as well as bowls of papaya, strawberries and more. From the main course menu, I went for my usual: a plain omelette with a side of avocado, which arrived in a silver dish. The sourdough toast came in a silver rack, with ramekins of butter – paper-capped – and marmalade. Servers kept their voices down (they sensibly did not wear clattering shoes), music was subtle and there were plenty of newspapers. On which tack, how lovely to be offered sensible newspapers, including the Financial Times and New York Times. These are delivered exactly, placed, as if by robot, to fit fair-and-square at right angles outside your door, unlike the haphazard delivery at so many ‘luxury hotels’. Ham Yard is indeed something special and no wonder so many guests return here again and again.

Which Silversea Antarctica expedition is right for your client?

Oct 20, 2020
Prev Next 1 of 1,639
Tweets by LATTEluxurynews
Subscribe to the LATTE enews
Enquiries