Social media is already making sure some nights attract over 800 hipsters, of all ages.

Sometimes a global traveller seems to have all the luck. Exactly five weeks ago the super-luxury The Peninsula Chicago opened its brand-new Z Bar.

After ten years’ planning, the Yabu Pushelberg indoor/outdoor movie set of a bar lounge opened on the air-space of what had previously been a fifth-floor terrace. Named for the hotel’s much-loved (and universally admired) GM, Maria Razumich-Zec, and thanks to the brilliant design, Z Bar was a hit from the start.

Three opening parties saw the first appearance of sports stars and other influencers who are part of the will-be 30-strong Z Club, invitation only. Social media is already making sure some nights attract over 800 hipsters, of all ages.

A debonair young Russia-born mixologist (sorry, ‘Director of Cocktails and Culture’) also helps. He, Vlad Novikov, has designed a leather-bound travel journal of a cocktail menu, wittily annotated. Order a $100 Manhattan Royale, as one to five do each night, and your handmade Richard Brendon crystal tumbler holds ice laced with 24-carat gold, over which is poured 18 year-old Elijah Craig Bourbon.

Some other, less exclusive, drinks are offered one-tot or as ‘funday’ sizing – 1.5 litres, meant for sharing. Since Z Bar’s terrace has working fire pits and a big glass canopy over, this place will keep its momentum, or increase it, year round. 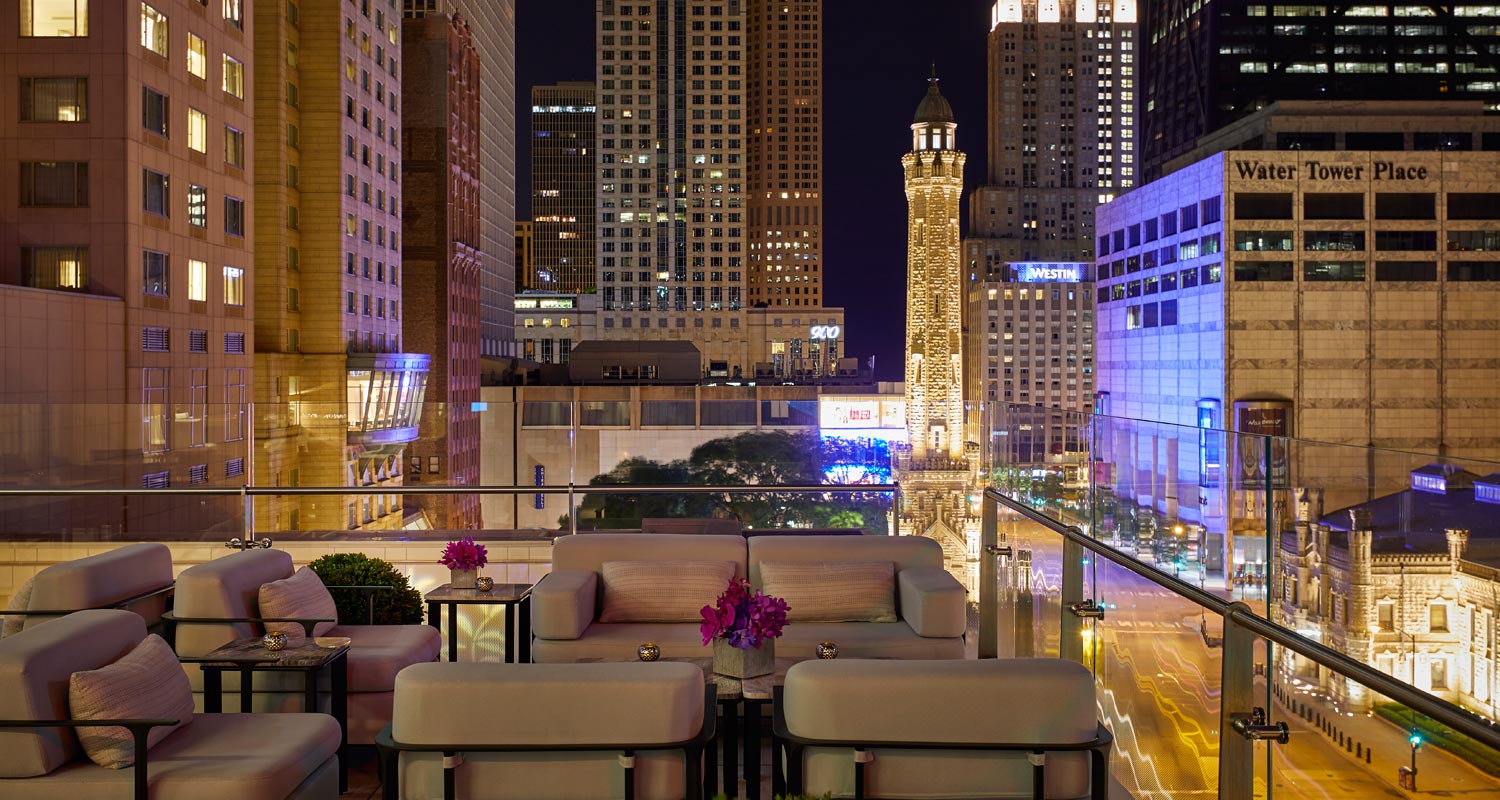 But back in the real world, or the hotel’s fourth-floor lobby, things have evolved, too. Gold ceiling fixtures have given way to soft silver and crystal and lollipop-ended trees, while big flower arrangements, thoughtfully named, make it even more agreeable a dining venue. Chef Toni Robertson, whom I have known since the last century, heads a team that produces such dishes as the green pea soup that looks almost too good to eat. (Talking of food, I was really sorry not to return to the hotel’s sidewalk-set Pierrot Gourmet – it is walk-in only and during summer, especially, every table was packed every time I passed, admittedly walking by rather than walking in).

A luxury hotel must think of everything, as big as bars and dining alternatives and as small as adding handbag-sized hand sanitizers to bathroom fittings. And the team uses its brain, continually. The Concierge team’s Keys to the City initiative offers such specials as VIP Suite interval access during Broadway-in-Chicago shows and exclusive shopping consultancy and gifts at Saks Fifth Avenue. Yes, these concierges can, it seems, do anything. Yet again I had an Apple software hiccup and Gary put me through to Apple Support on the phone – unfortunately the third Apple supporter I was connected to cut me off (bad mark, Apple).

The hotel wins on everything: from the soft powder blue and cream corridors, to the exquisite bedroom decor with one wall an embroidered panel of a bee and massive chrysanthemum, Chicago’s flower; and the 24/7 gym with Power Plate, two Peloton stationary bikes and joggers’ televisions that work… and being able to get outside, on the 19th floor Olympic pool gym’s terrace, for some pre-breakfast breathing exercises. Now what WILL Maria Zec add next?

But I could not wait. I wanted to move south, to Chicago’s Loop, with its theatres and bustle and noise. What looked like a small boutique hotel next to the Cadillac Palace theatre on West Randolph Street turned out to be a Big Surprise. Kimpton’s 19-floor Hotel Allegro is huge, with 483 rooms – admittedly bijou – while the public areas are dramatic. Go up the statement staircase to the second-floor lobby and you pass an assortment of nooks and crannies. There are so many areas to make your own, says Iris Junge, the Assistant General Manager who was in charge of the hotel that day. 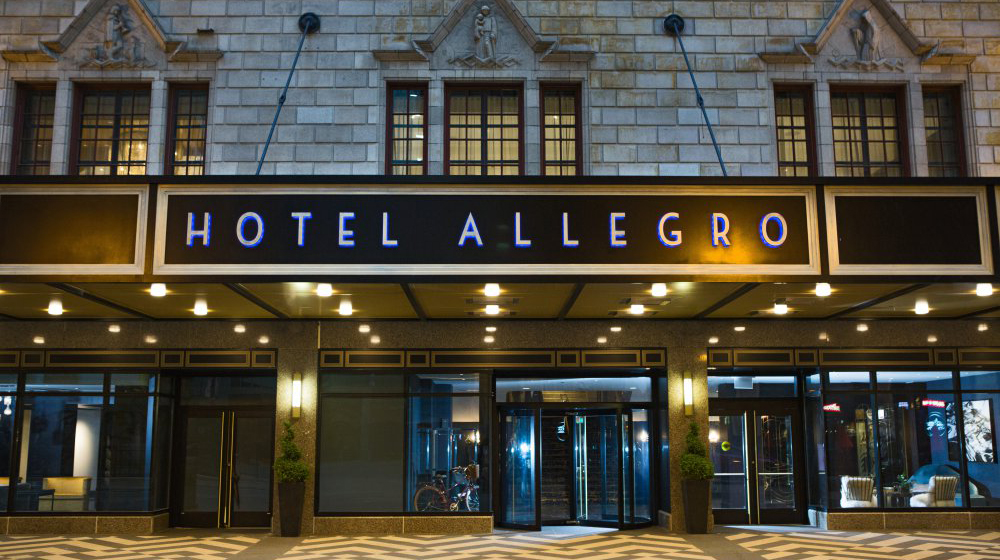 The hotel is connected internally to restaurant 312, on the corner of La Salle and West Randolph – but it is the lobby which is heart of the hotel, both during breakfast time’s complimentary beverages-only help-yourself bar, from 6am to 10am, according to the outstanding A4 information sheet in my room; and again from 5pm, for Kimpton’s signature hour-long hosted cocktail party.

My night, prosecco and sangria were being poured into coupe and tulip glasses by the head housekeeper and the director of leisure sales. We love doing this, probably twice a month, they said – I realised this nightly cocktail is a joy to colleagues as well as guests. 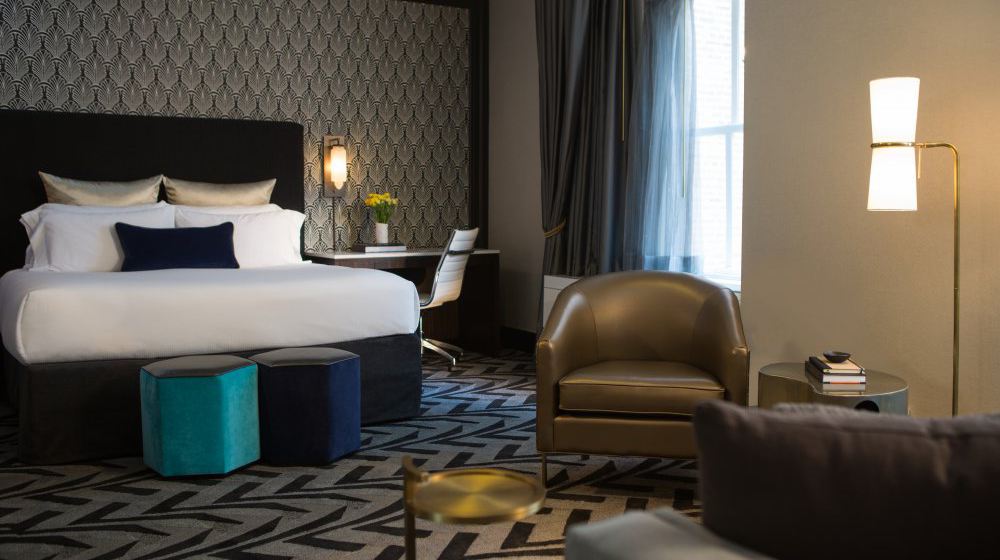 Iris and I later walked through to 312, a two-floor typical classic diner with fixed booths suited for size-0 models rather than sumos. Chef Luca Corazzina’s menu is real Italian, with such dishes as Ippglosso, roast halibut on cauliflower purée, and watercress, red onion and fava beans: your bill, by the way, comes in the very-American format of having suggested tips already included, for 18%, 20% and 22%. One extra, which was new to me, was also seeing on the bottom of the bill, ”Looking for a private event? Contact Carolyn Orlando #312 32 7118”. Clever.

But there are so many clever memories of this hotel. Room 1012 was certainly compact, but the two scarlet-lined fitted cupboards had all I needed and a standing six-foot high mirror had a ledge for holding small things, plus two extremely useful hooks. Back after our enjoyable dinner, I found a tea kettle and an elegant tray with macaroons and all ingredients, and instructions, for making apricot-peach fruit tea, from scratch. What a typically thoughtful touch. 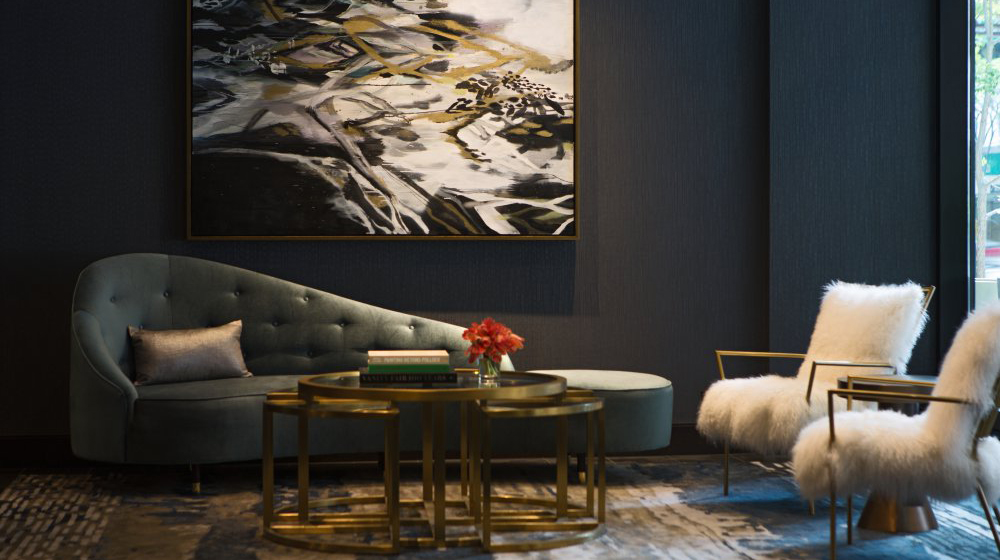 I wonder what German immigrants Emil and Karl Eitel, who asked architect C.W. Ceolbapp to design this block in 1926, would think of this fascinating hotel today? When Kimpton bought it in 1998 it was the Bismarck, probably as sinkable a name as Titanic.

The conviviality today is infectious: the lobby’s breakfast and cocktail socialising encourage conversation, as do both working out in the excellent Precor gym (24/7) and waiting for the elevators (‘which is going to come first’ becomes a guessing game when those in the groups that constitute around 60% of guests are all trying to go down, or up, at the same time).

I want to return at a weekend, by the way, to see a Waggin’ Weekends cagnolino menu in action. Bring your pooch and choose a $4 treat, namely peanut butter biscuits or beeficle; or a $7 main of chicken with pasta, or salmon and white rice. Cleverly, they also offer upselling. Choose a treat and a main, for $9 total, and you save a couple of dollars. Iris Junge says this hotel is effortless luxury but honestly I would say Hotel Allegro is extremely thoughtful, with panache.

Dec 1, 2022
Prev Next 1 of 2,162
Tweets by LATTEluxurynews
Subscribe to the LATTE enews
Enquiries