Chicago likely next US hub for Qantas

The lengthy process and uncertainty involved in the US government qualifying the proposed TransPacific Joint Business Agreement between Qantas and American Airlines has come at the cost of new non-stop flights from Australia to Chicago, paperwork submitted last week to the US transport regulator all but confirms.

Qantas and American Airlines reapplied for their joint alliance with the Trump Administration in late February after the Obama Administration declined an original proposal in November 2016, concerned it would “harm competition” on the Australia-US route.

Responding to a request for extra information under their resubmitted Joint Business Agreement (JBA), Qantas and American Airlines filed a 119-page submission to the US Department of Transportation, detailing the economic value of their alliance, their combined network growth opportunities and a host of other benefits. The submission also explained the scenario and impact on codeshare services and new routes, should the sought-after Antitrust Immunity (ATI) request be knocked back.

After their 2016 rejection and Show Cause Order, Qantas and American chose to wind back their existing codeshare alliance on key international routes, a strategy to highlight their dependency on each other to help fill aircraft.

“At the time, American recognised that further reductions in codesharing would have been beneficial to American’s service in the short-run, but given the Parties’ intent to re-file for ATI, and to avoid additional loss of goodwill from abandoning routes, they have maintained a greater level of service and cooperation than they would if there was no hope for implementing the Proposed JBA. If the Department denies ATI, eliminating the prospects of the Proposed JBA, the Parties’ incentives will remain unaligned, and the level of codesharing will be reduced significantly,” the carriers said last week.

The same public document – some of which is redacted for privacy concerns – says the lack of passenger feed on those services was the catalyst for AA already decreasing capacity on its Los Angeles-Sydney service, and further was the reason Qantas chose to adjust frequencies on its Texas route from daily to 6 weekly, taking effect in early 2019.

“The reduction of feed support from Qantas’ codesharing on American’s long-haul flights forced American to down-gauge its LAX-SYD flight to a smaller aircraft (American also downsized its offering on LAX-AKL to seasonal service). For Qantas, lack of American’s feed support led to down-gauging of its DFW-SYD flight from a daily A380 service to a 6-days-a-week service, beginning February 2019,” the submission said.

Further, the document indicates that new Qantas Dreamliner routes to the US have been put on ice, with the fall back of deploying its brand-new Boeing 787-9s to Hong Kong instead.

“Qantas was also unwilling to deploy its latest Boeing Dreamliner 787 aircraft to new destinations in the United States, and the aircraft was instead directed to Hong Kong, beginning December 2018,” the file said.

Qantas Group Chief Executive Alan Joyce has previously suggested 787 possible routes to the US include Brisbane-Seattle and Brisbane-Chicago, with the latter the more obvious choice being an American Airlines hub. Chicago has also been chosen by Air New Zealand as its entry point into the US Midwest, with the Kiwi carrier also flying 787s to ORD commencing 30 November this year. 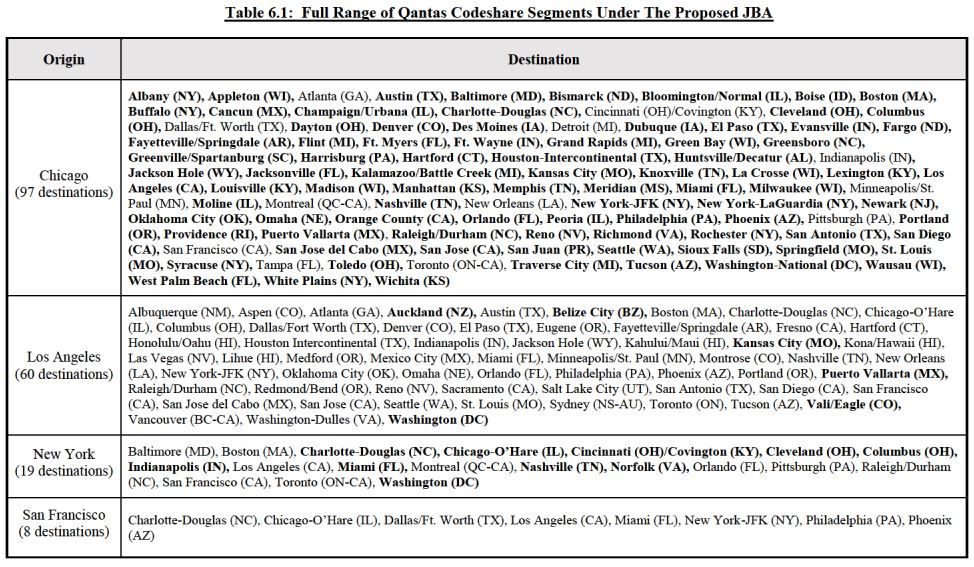 The table above is contained with the “Response to Order Requesting Additional Information” and indicates that Chicago will immediately leapfrog Los Angeles as Qantas’ second largest codeshare hub in the US with American Airlines, while Dallas will swell to a total of 161 destinations. 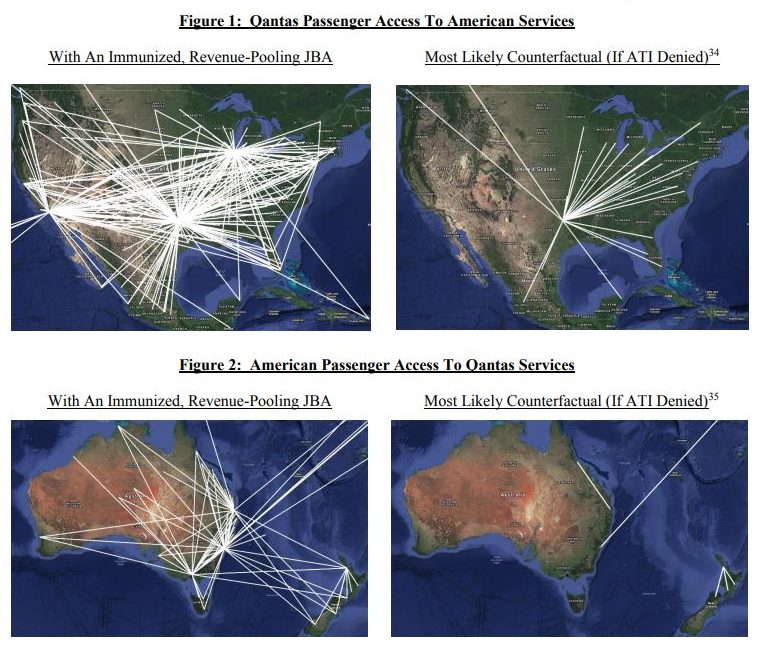 The City of Chicago itself has also backed the alliance. In a letter to the US Department of Transportation dated 31 August 2019, Chicago’s Department of Aviation said it was in “strong support” of the application by American Airlines and Qantas.

“Chicago-area business (currently there are over 120 Chicago-area companies with significant operations in Australia and New Zealand combined) and leisure travellers could benefit in many ways from approval of the proposed joint venture, which has the potential to lower fares, increase capacity, add new flight and route options, enhance codeshare connectivity and improve schedule coordination.”

Elsewhere, Qantas and American Airlines highlighted that with ATI approval, AA would consider moving its Los Angeles-Sydney service to a departure leaving in the morning (at 0935) and touching down at 1945. The US carrier’s return flight would depart Sydney at approximately 0600, and arrive in Los Angeles at 1700.

Additionally, based on a study, the parties suggested their proposed revenue-pooling JBA has the potential to reduce connecting fares by between nearly 8% and up to 25% lower than interline/codeshare fares.

“Beyond absolute reductions in fares across the board, the Proposed JBA still also increase the availability of lower-fare tickets through more efficient revenue and yield management.

“With revenue pooling, the Parties will be incentivized to offer more lower-fare seats on connecting itineraries in order to account for revenue pooled on the long haul flights. As a result, the Parties will invest heavily to improve
their yield management functionalities and increase the availability of lower-fare seats offered to the JBA partner,” the oneworld member partners said.

The submission also highlights the benefits of the JBA for corporate customers, who will be able to contract in one place for more of their clients’ travel. “The Proposed JBA, with its broader, more compelling network offering and integrated sales team, will create a valuable new option for corporate customers.”

“[The JBA] will create a better, more viable third competitor for corporate customers seeking coverage for travel in the United States and Australasia. American and Qantas cannot effectively meet this need today – they are at a competitive disadvantage to United-Air New Zealand and Delta-Virgin Australia, immunised JBAs that can
offer streamlined corporate contracts for travel between these regions today,” the airlines added.

The latest submission comes as Qantas introduced its newest route to the United States today, with four weekly Boeing 787-9 Dreamliner flights between Melbourne and San Francisco. And coincides with QF introducing its Dreamliners from Brisbane to Los Angeles, and onwards to New York.

May 11, 2021
Prev Next 1 of 1,753
Tweets by LATTEluxurynews
Subscribe to the LATTE enews
Enquiries