Bulgari, EDITION and the Middle House

Shanghai is one of those world cities that seems to launch new luxury hotels with every new moon, and of course, all of them seem to be successful in an environment that craves the latest and where innovation abounds. Someone, for instance, has had the brilliant idea of using the city’s heritage.

The Chinese Chamber of Commerce – a three-floor, 1913-vintage heritage building more or less behind The Peninsula Shanghai – was used as the anchor for a completely regenerated development. The Chamber of Commerce is now surrounded by high-rises, including a 47-floor tower that houses Bulgari Hotel Shanghai. The hotel manages events, which include lots of weddings, and there is also an ultra-elegant Chinese restaurant, Bao Li Xuan, in a space that fits how I imagine a Last Empress drawing room might have looked. 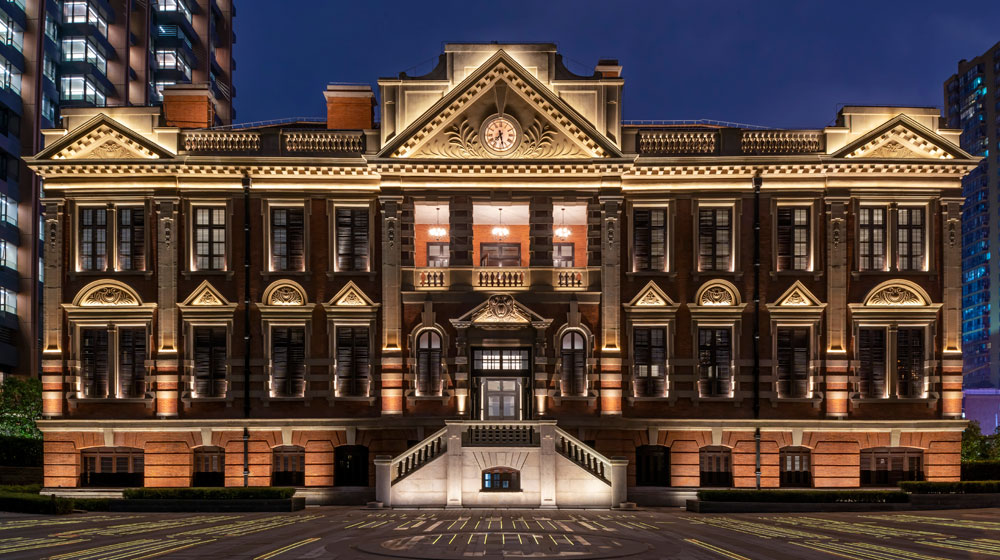 Bulgari Hotel Shanghai opened a couple of months ago but its GM, Vincent Billiard, was here over three years before. He described how he watched the rectangular building edge its way up, floor by floor. It has Bulgari retail on the ground floor, and the 120-room hotel is on floor 40 and up, with gigantic Bulgari signage on two of its rooftop facets. There are big photos of Monica Viti in the lobby lounge, and other jewellery-wearers are displayed in continuous loops of old movies running in the hotel lifts. All this Bulgari awareness certainly attracts staff (Elva, the chic director of the extremely stylish La Mer spa, admits she is besotted by the brand). It also attracts custom, both for bedrooms and other business. 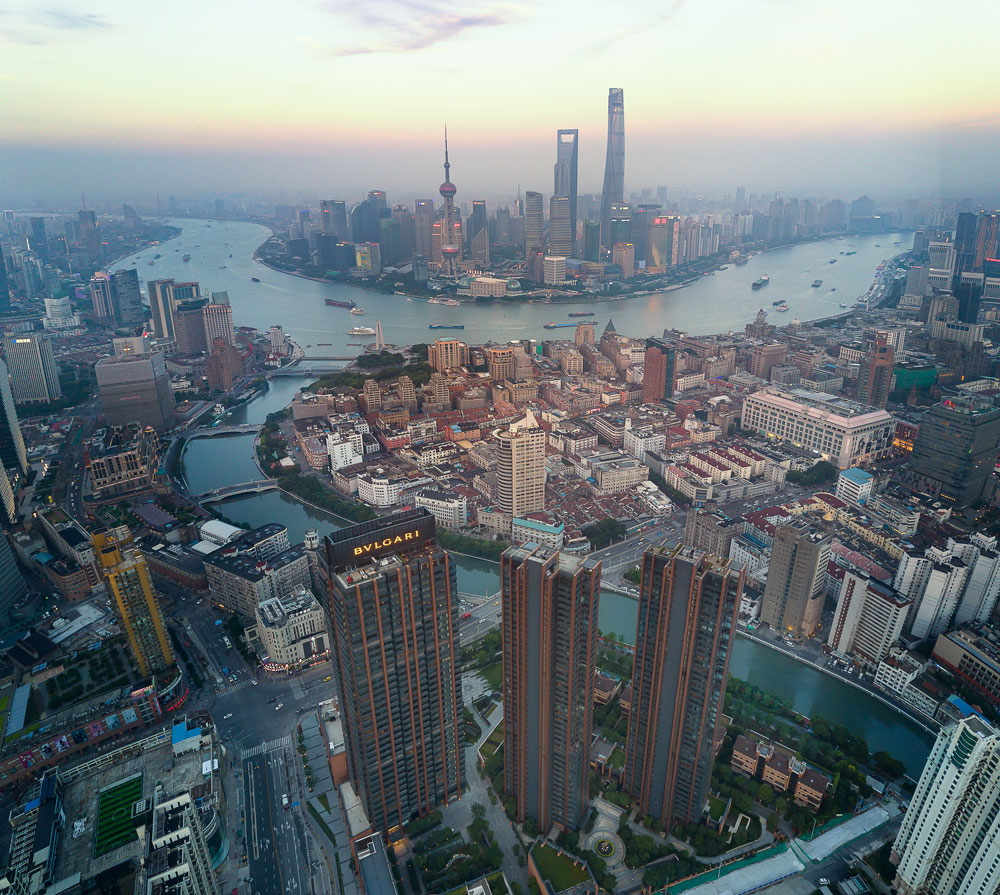 We walked over to the Chamber of Commerce, seemingly free of the actual word ‘Bulgari’.  As luck would have it, our visit coincided with a memorable wedding, which actually looked more like a Vegas-type stage show. We looked in on some of the building’s private dining rooms. I was also thrilled to see Bao Li Xuan, which has a paper menu and hand-stitched spine, and is read from back to front, downwards from the top, Chinese characters only. 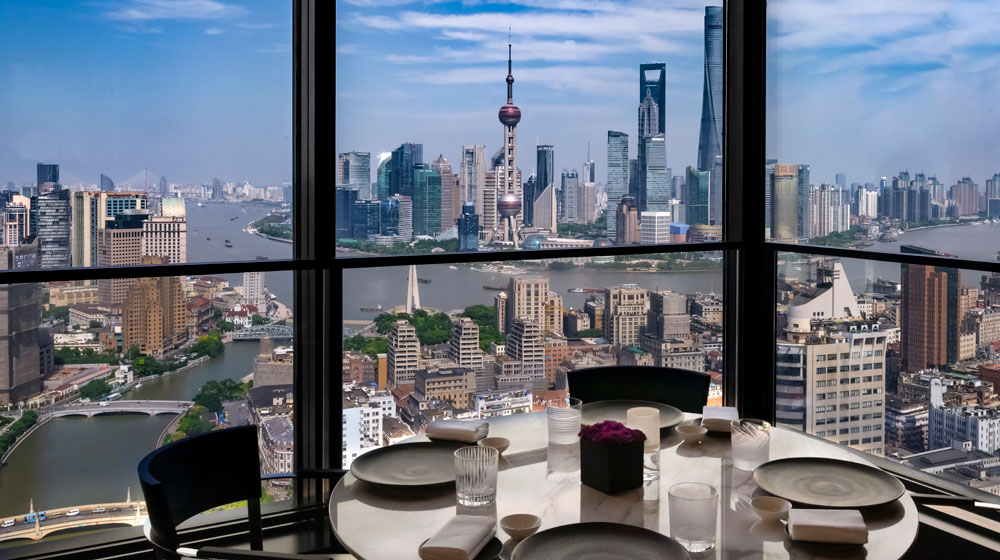 But we were dining back in the main building, so we went past numerous inner-lit vitrines of Bulgari jewels and took a lift up to the 47th floor. There, we went through to the bar, dominated by the brand-signature central bar counter, a horseshoe shape of pure bronze, three tonnes in all, which had to be hoisted up by heavy-duty crane.  Beyond the bar is Il Ristorante Niko Romito, serving great food and wine (and the exact same menu I had had in Beijing a few days before), and cutlery is Bulgari, designed by Silvio Ursini. 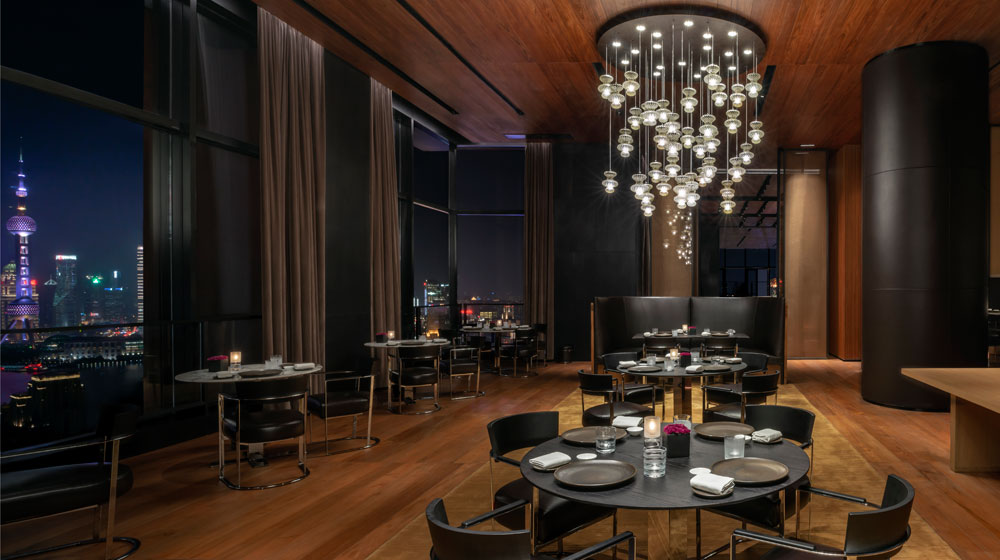 It was Ursini who designed the hotel’s bedside lights. Beds, by the way, have grey cashmere Bulgari throws (Beijing’s are rust). I was in Bund Suite #4303. The back third of the large main room was artistically ‘caged off’, with glass-held gold net, to form a semi-private study.

The closet is a walk-through, from the main room to the bedroom and bathroom. Once again, as in Beijing, I was able to start my day in the outstanding Workshop gym, which is 24/7 with a well-thought-out Technogym piece.  Through a shortage of time, here I decided to have room service breakfast, which is also available any hour (yes, 24/7). It arrived on the dot, with the crispest linens and – what luxury! – plenty of excellent coffee in a black Stelton pot designed by Erik Magnessen. As I left I made a note, next visit, to borrow one of the hotel’s Bulgari-labelled black bicycles, titanium aluminium and carbon monocoque. These are Momo Design, stunning to look at and, I am sure, just right for a spin around town. 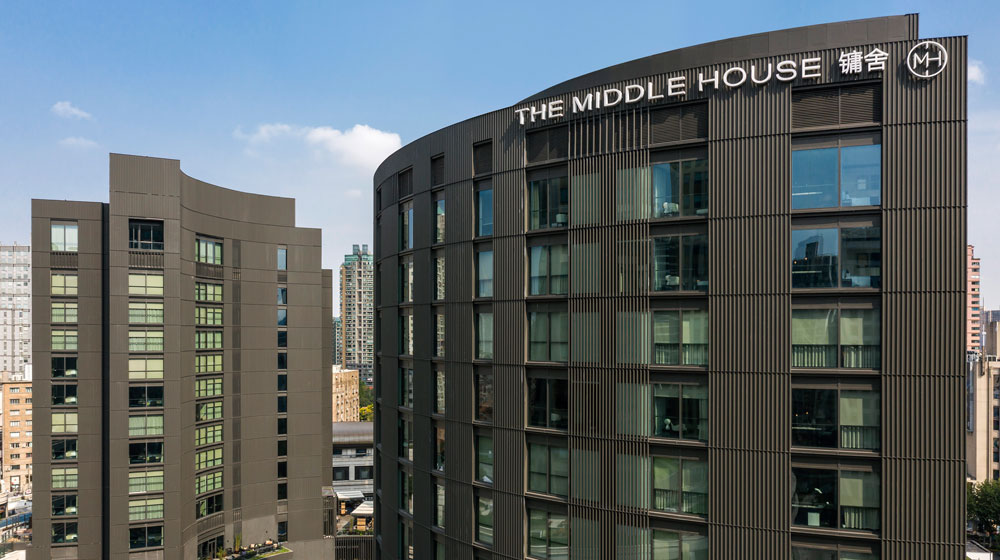 There were sleek Ulac bikes outside The Middle House, the latest in Swire Hotels’ Collective range. The car swung into a slate and real bamboo oasis, surrounded, as at Bulgari, by high-rises. Inside the 111-room hotel, designer Piero Lissoni seems to have blossomed. Yes, there are his signature dark colours and sombre tone here and there, but there are also such delights as a coffee corner. And he has cleverly put the beds in the centre of rooms, with high-enough bedheads really to become ‘walls’ separating working from sleeping space. Also, a really unique feature is that every room has a simple attached-to-ceiling cord by the bedside, the master switch (GM Michael Faulkner calls this ‘Mr Goodnight’). 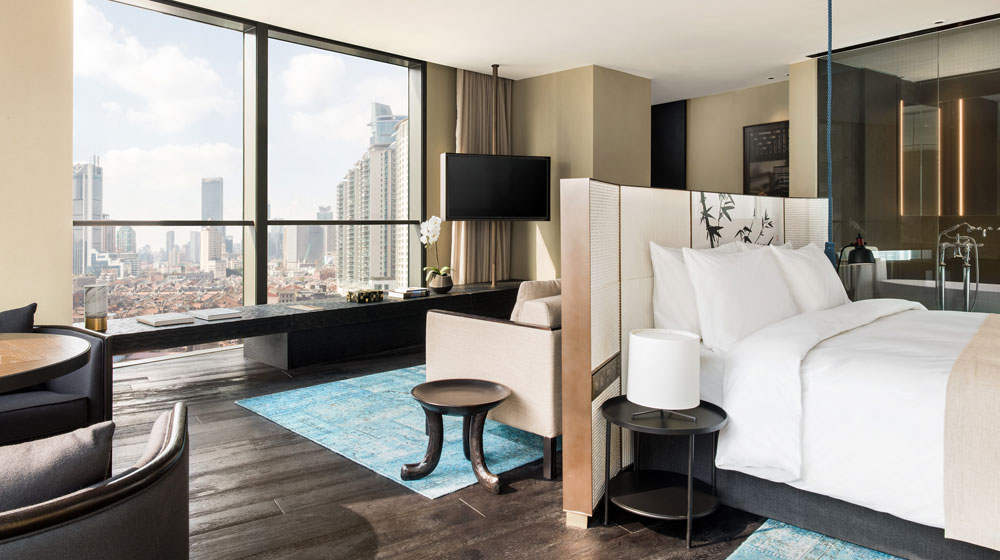 The 14-floor hotel block connects, subterraneanly, to another block, which has 102 serviced apartments. Along this lowest-level walkway is a splendid spa, which uses LVMH’s new products CHA LING, perfected by Guerlain President/CEO Laurent Boillot. Bedrooms in both blocks use Bamford, and there is Illycaffè espresso. I especially liked the hotel’s two-room Penthouse Suite on the 14th floor; with a round dining table to seat six, it is probably also used for small meetings.

Other notable features include a comfortable Café Gray, as in Hong Kong’s Upper House, a sister to this hotel. Also, the hotel and its residences are above HKRI Taikoo Hui shopping mall, whose Starbucks Reserve Roastery is the brand’s largest, worldwide.

And then it was off to The Shanghai EDITION, which opened this July. This could honestly be called an entertainment place that happens to have bedrooms (in fact, 147 of them). What was particularly fascinating was the way GM Ronan Henaff, from Brittany, relayed how EDITION founder and leader Ian Schrager is minutely in control of everything. He appears to check how far down the ceiling-hung living garden rods actually hang, for instance. The really good EDITION newspaper, an A4 ‘newspaper’ that is presented folded in half, has a quote from Schrager: “To turn a hotel into a destination, you need a unique experience that touches people in some personal, emotional and visceral way.” 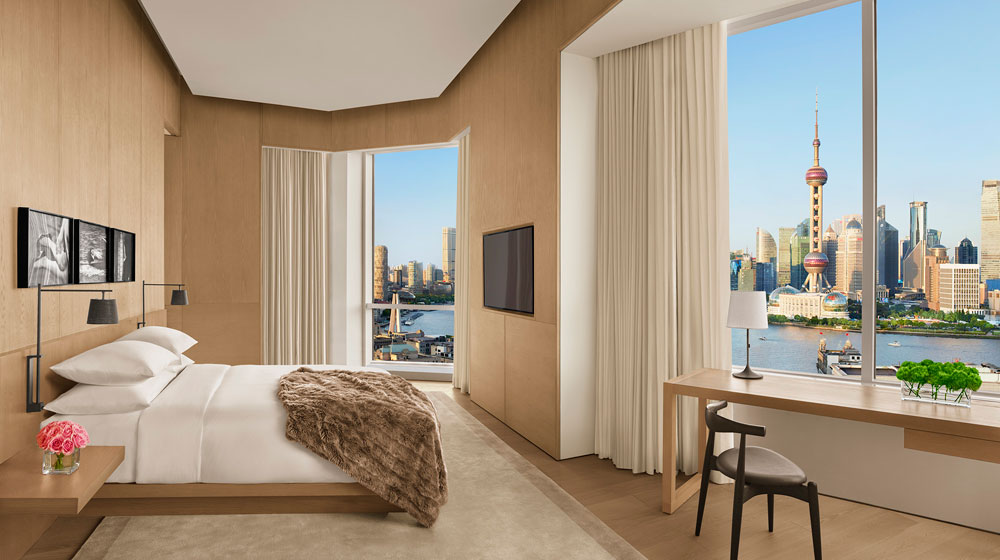 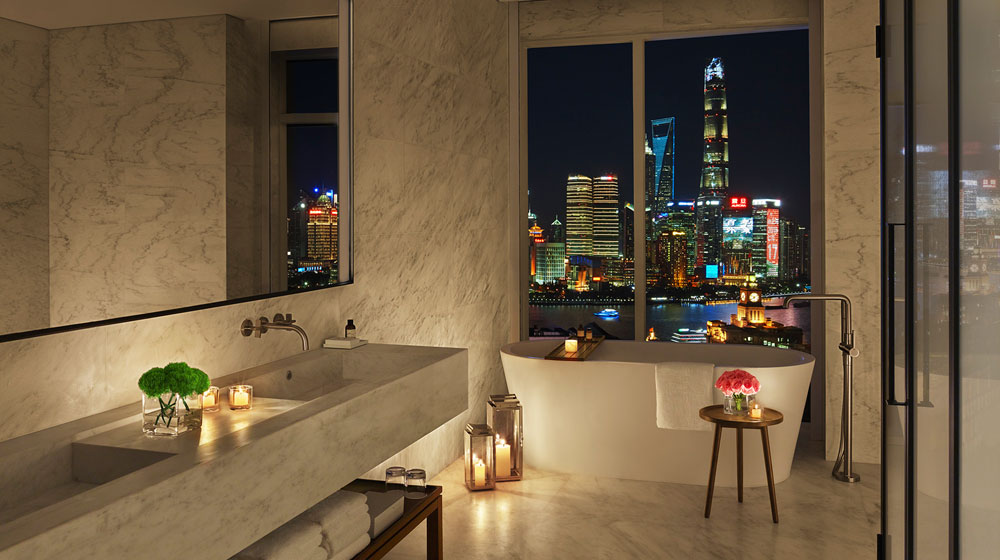 Ian Schrager has obviously had a close hand in putting in rooftop lounges on both of the hotel’s towers and, inside, a Club lounge, red-hued nightclub and screening room. There are also restaurants – lots of them – which is just fine for Ronan Henaff, who was previously GM of Shanghai’s multi-use Three on The Bund.

Today, he hosted lunch at EDITION’s Japanese restaurant, Hiya, on the 27th floor; it is run by Brit Jason Atherton, who also runs this modern luxury hotel’s ground floor Shanghai Tavern. The sashimi, in particular, was absolutely ace. Yes, there is lots of ‘new’ to see in Shanghai. And, next visit, I will have an Aman, a Capella and a Rocco Forte on my list.

The Blue Train 2-for-1 from Cape Town to Pretoria

Sep 28, 2021
Prev Next 1 of 1,865
Tweets by LATTEluxurynews
Subscribe to the LATTE enews
Enquiries