New York’s 1 Hotel Brooklyn Bridge has so many touchpoints I keep on thinking in retrospect of yet more things. Opened in February 2017, it is adjacent to Brooklyn Bridge Park, a conversion, thanks to then-Mayor of New York Michael Bloomberg, from old warehouses. 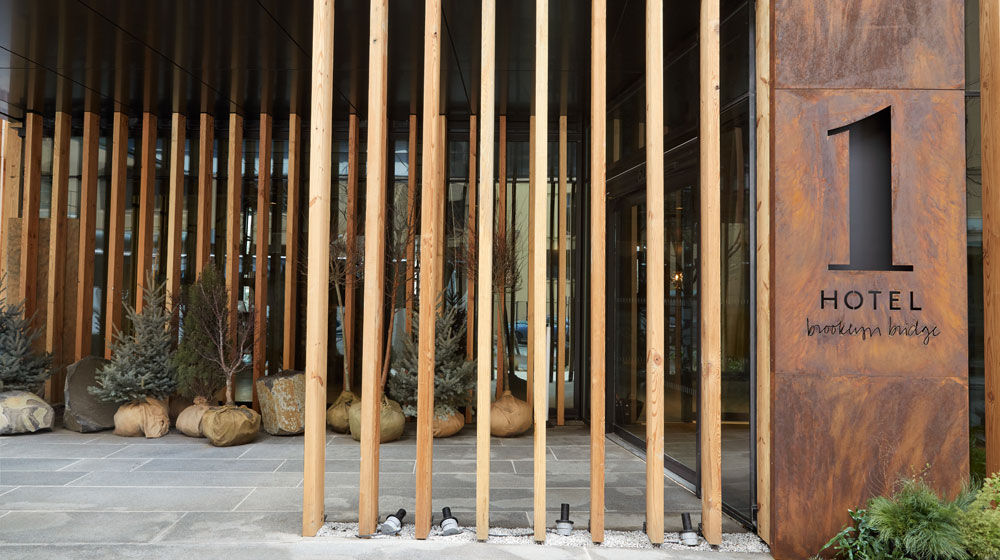 It is an 11-floor structure, a glass and metal new-build by Marvel Architects, with interiors by INC Architecture. The exterior is square, made from glass and metal and unpolished wood. It is flat-roofed to catch what will be 5,000 gallons of rainwater a year, that will be fed down through massive pipes that form columns in the two-floor lobby below, and on out to water the adjacent Brooklyn Bridge Park. It is again thanks to Michael Bloomberg, by the way, who helped make this gorgeous park, replacing what had been warehouses in times past. Today, those lucky enough to stay here can look across the Hudson to the Statue of Liberty and lower Manhattan. 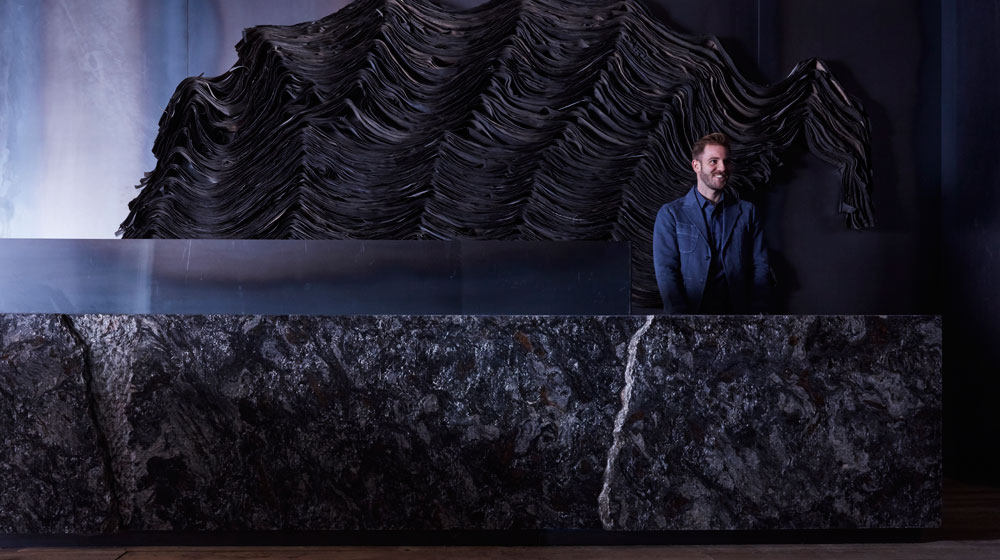 Interiors, by INC of New York, feature concrete, reclaimed wood, steel doors and thousands of real green plants. There is some amazing art, including Rachel Mica Weiss’ Unbounded, also known as a ‘pile’ of 6,000 football-sized odd-shaped lumps of obsidian rocks, each tied, as if a parcel, with orange string. Over front desk is a gathering of black rubber strips: Jarrod Beck’s All OVEREACHOTHER.

In my gorgeous suite 907, I had two memorable wall ‘art’ pieces. One is a display of 750 ml-sized glass bottles, some holding living greenery; the bottles have been made by Edison Zapata and Romina Gonzales, of OffCentre. The other ‘artwork’ is a wall-set circular tap, which gives you distilled water. 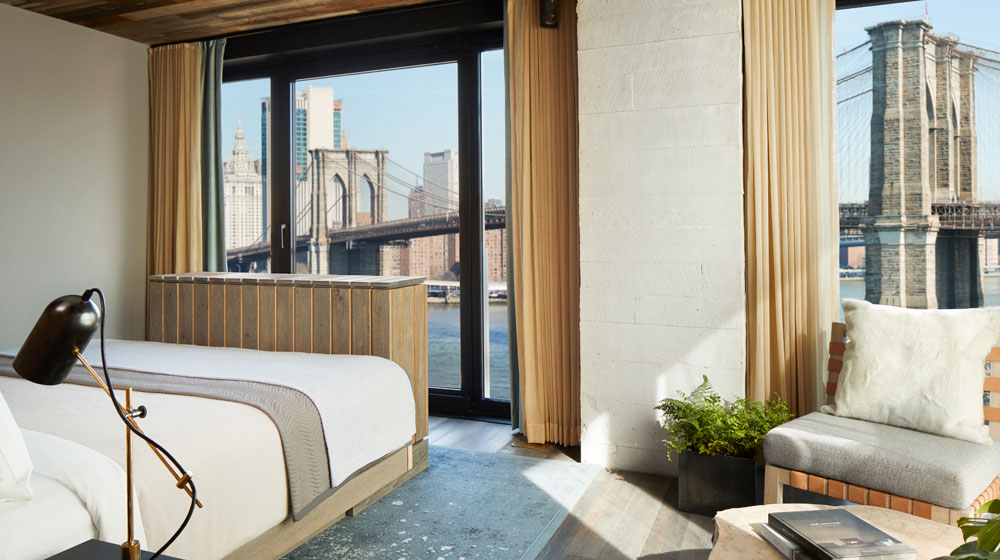 Suite 907 is one of 26 in the 195-room hotel to have a hammock, as well as a remarkably comfy bed. Closets look as if they are fashioned from old packing crates, and coat hangers are marked ‘made from old maps’ and ‘made from papers’, as appropriate. I know that all electricity is purchased by 1 Hotels, on a corporate basis, from wind farms around the USA. My linens are laundered by eco-friendly companies. The suite also has what might be considered a plethora of standing aspidistra-type plants; to tend all this greenery, and nurture the ceiling-high living wall in the two-floor lobby, local landscaper Harrison Green has at least two specialists in the hotel two days a week. 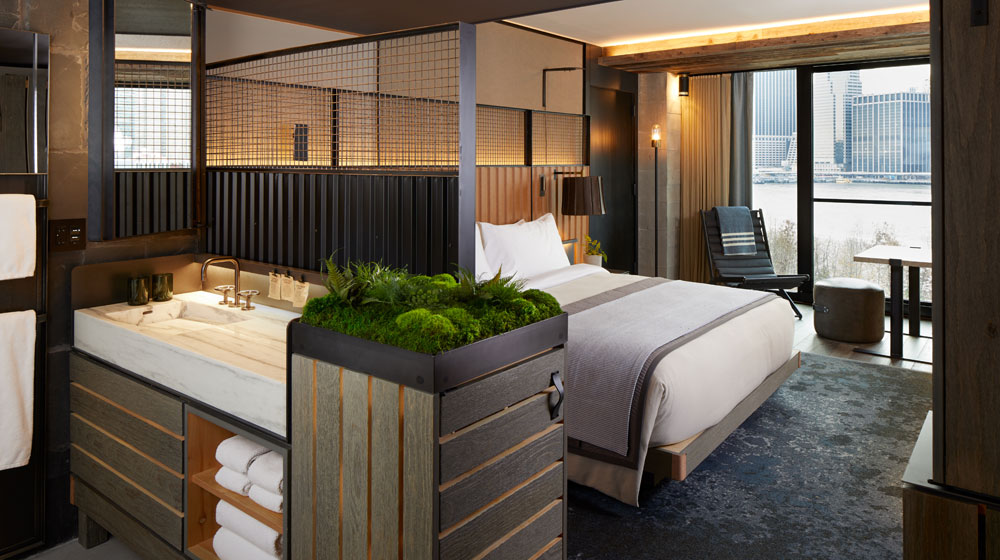 Having been out for dinner last night, I only had breakfast here. The choice was Neighbors, a grab-n-go outlet with the menu projected on to the wall behind the servers, or Osprey, a large space that flows out to the park-set terrace. Osprey is own-run, overseen by Ivy Stark, who is also a sommelier. The omelette here comes with heirloom tomatoes, feta and oregano, and the butter is whipped pumpkin purée.

There are rush baskets of apples and a wooden urn of apple cider by elevators, and all the seating in the lobby, both at low-down collapse-type chairs as well as high-set communal tables, appears to be unofficial WeWork offerings, perhaps for those who work in one of the myriad of tech studios around (there are many buildings, also, currently being brought to 2018 style).

GM Hans Schaepman says that, summer long, the rooftop with the pool that seems to be a ubiquitous feature of US new-builds these days is the venue for early-evening networking; a bar on the 10th floor perhaps suffices when winter weather sets in. Oh, there is so much to say about this unforgettable hotel. Schaepman also explained that his 300 team members are rewarded not only for hotel-run community projects but also for anything that a team member organises in own time; spend a day cleaning up a local school’s garden, for instance, and you get a day’s salary. 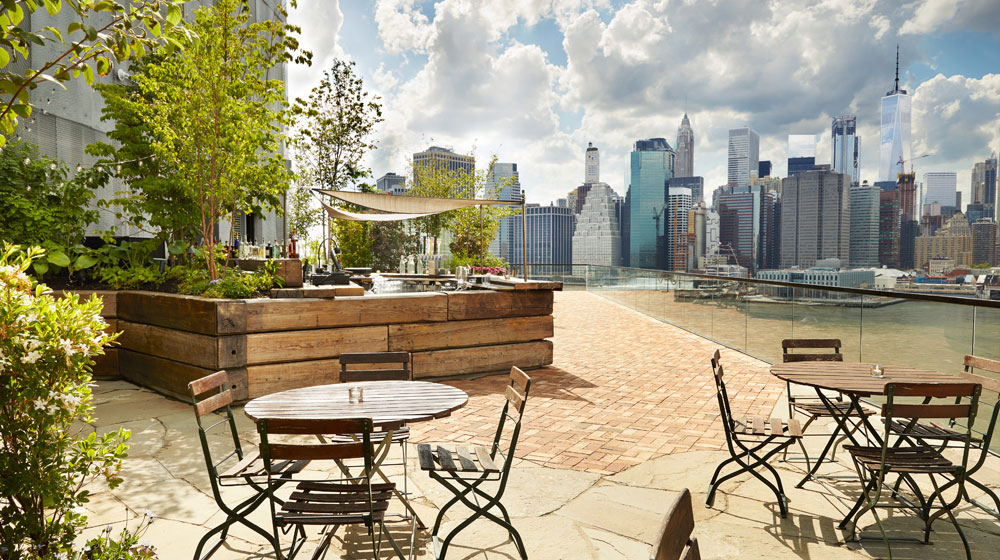 The team here are younger and perhaps noticeably more alert than in some of New York’s other luxury hotels. They are committed to the property’s stance on sustainability, and they love its happenings. Such mammoths as Apple stay here, making use of a ballroom – sorry, Event Space – that seats 350 and flows outside to the park. Yuppie staycationing Americans of all ages are so drawn to the hotel’s setting, rooftop pool and restaurants-bars that weekend rates soar to over $600 (go weeknight and they are well under $500).

Finally, a story Hans Schaepman told me as I was leaving. He was recently approached by someone wanting a concierge position. In interviews, his policy is getting applicants to talk about what is important to them. It turned out this young man has been going home to Costa Rica every summer to help build houses for underprivileged. He was a natural fit for the hotel, says Schaepman. 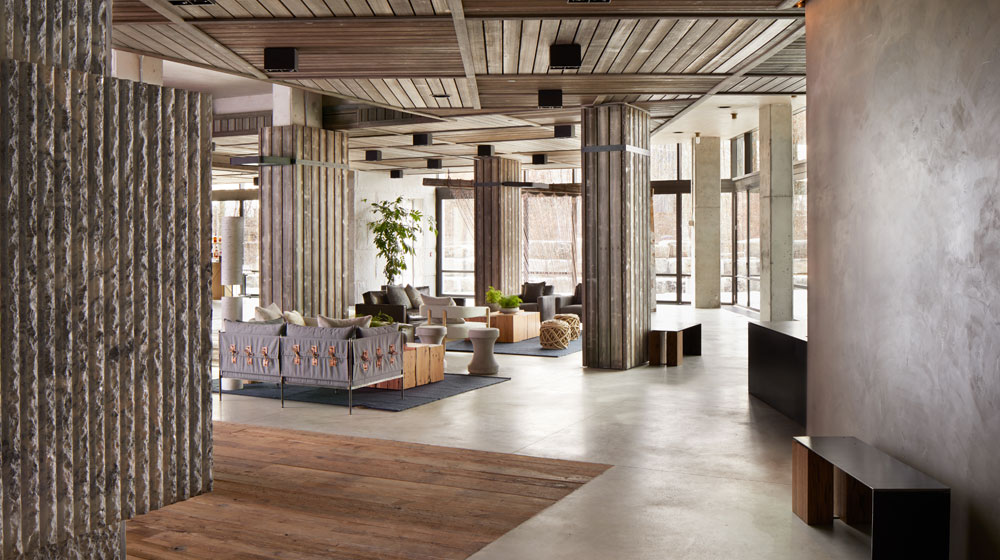