There is excellent air connection between Australia and Mauritius via Singapore Airlines, and, once on the Indian Ocean island, plenty of luxury resorts await.  I went to check out two of the newest, both members of the just-renamed The Lux Collective. 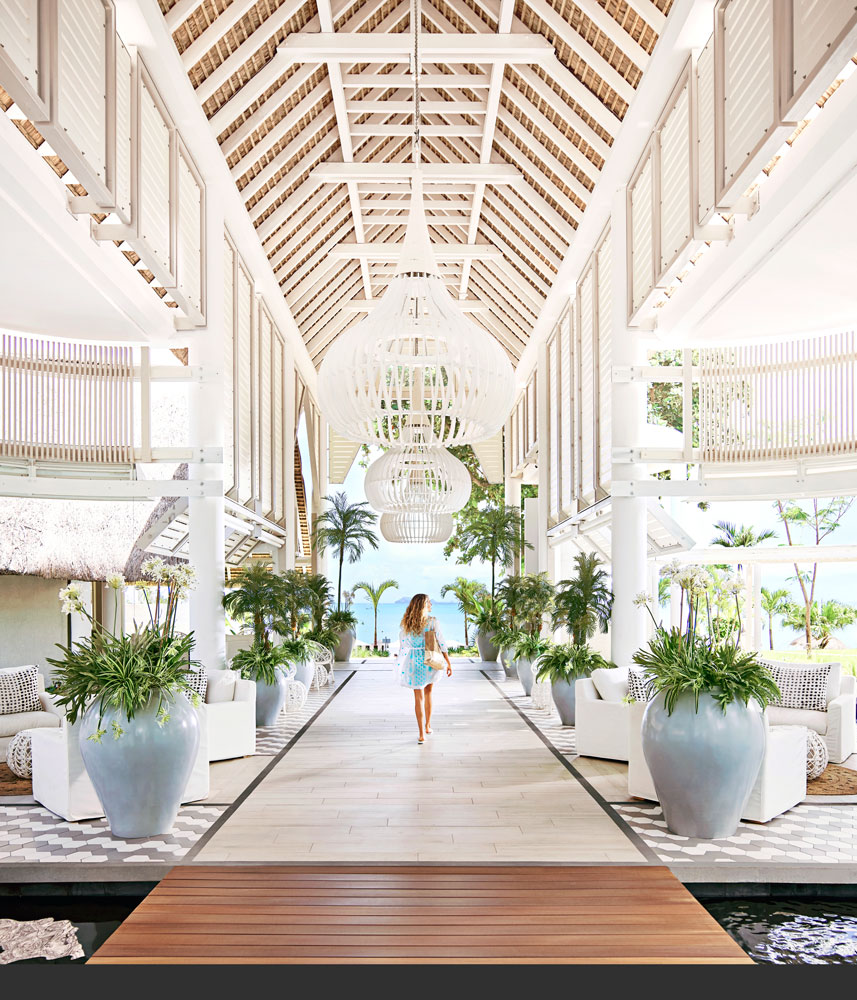 LUX* Grand Gaube, which unveiled its Kelly Hoppen look in December 2017, is Mauritius’ taupe-and-white luxury resort, with hints of sea blue and, in one instance, a riot of colour.  This is the magnet for British lords and anyone who feels in tune with the look of the Hoppen design, the softness of fabrics, the emotion of the sunrise.  The sensitivity started the moment I arrived. A welcome line-up, led by GM Brice Lunot, from Brittany, was all the more striking because nearly all the 546 people who make this 15-hectare resort work wear the simple white cotton robes that are so suitable in this climate.

Gardeners, not surprisingly, are not in white: they have a non-stop job as they are supervised, sometimes in person, by London floral-darling, Stephen Woodhams. Although all 92 rooms are predominantly, as I have said, taupe and white, there are lots of mirrors and wicker; in some areas every rainbow hue is boldly shown.

French artist Camille Walala has turned the lunch restaurant below the pool into a Frank Stella look; street artist Jace has covered the static Citroen that serves as a bar in the adults-only peninsula with graffiti. There are so many different areas in the entire complex it is not surprising the hotel was 95% full my night, with average stay eight nights. 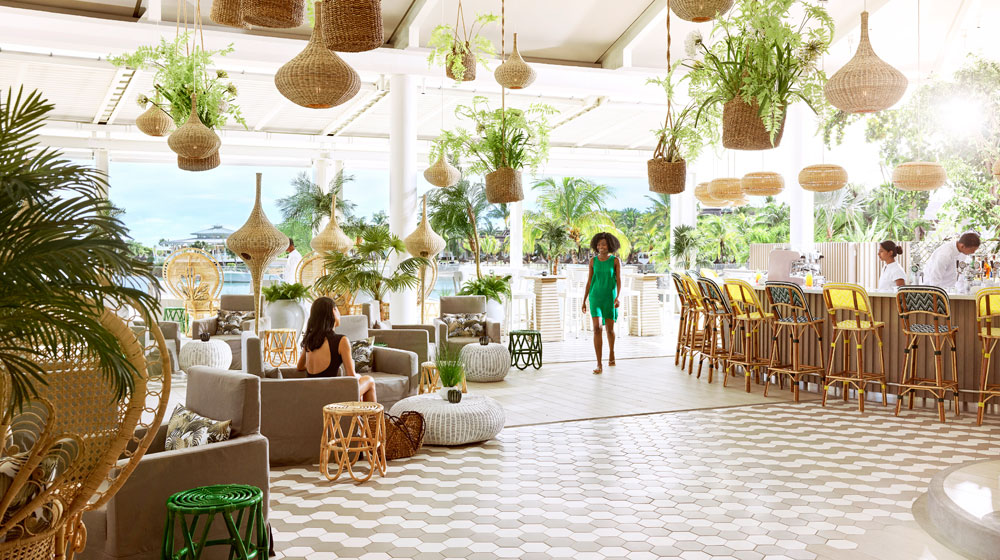 One peninsula is adult-only. It has a high-up treehouse bar and a burger joint, where the crab, or smoked chicken, are favourites of the seven cooked-to-order options. Throughout the resort you find a really great line up of F&B experiences, devised by Patrick John of EPJ and LUX* food specialist Walter Lanfranchi. The all-day Palm Court has numerous live-theatre kitchens.

I dined with friends in the colourful mostly-red INTI, a South American restaurant with an equally colourful Argentinian chef (the hotel’s top chef, by the way, was formerly at La Mamounia in Marrakech). The next day we lunched in the blue and white Bodrum, seemingly cantilevered over the blue sea. The chef who prepared the tara and subsequent Iskander kebabs, naturally, was Turkish. 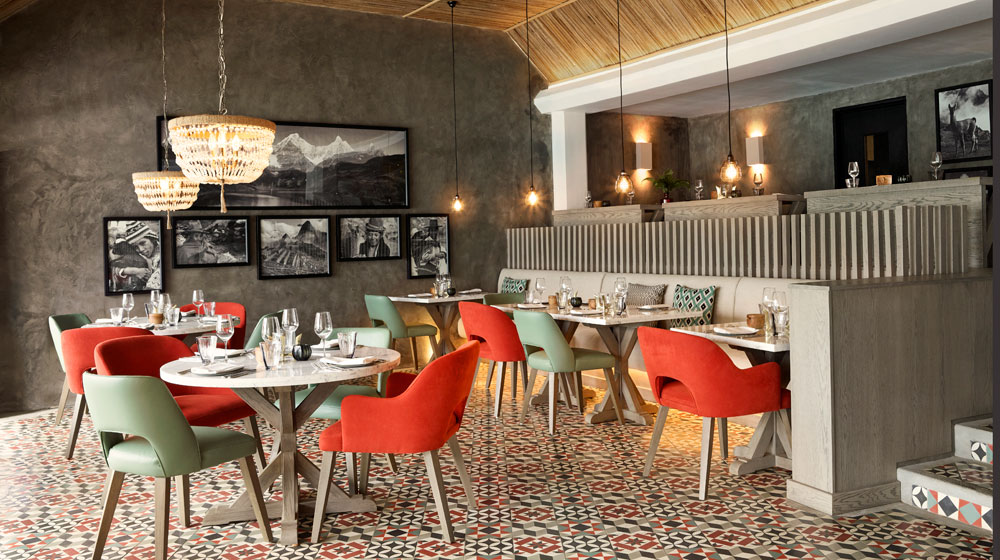 The day’s activities that Sunday included biking, coconut sculpting, a mixology class, beach volleyball and tai chi. There are four tennis courts and paddle tennis, as well as a first-class LUX* Me Spa, with Murdock barbering and Essie nails (the fact there are 13 treatment rooms shows the popularity of this spa).

On my way back it was very tempting to stop off for at least one scoop of ice-cream from a beachside cart that sensibly allows you to pay by swiping your room key card, thus no excuse for not having any money. Some would also dally to try one of the hundred-plus gins from a nearby gin bar. LUX* is a really clever concept. Subtly, you pay for things here and there, though you note, more obviously, the fact that telephone calls worldwide are, thanks to VOIP, free in the London-red telephone kiosks that are a LUX* feature. 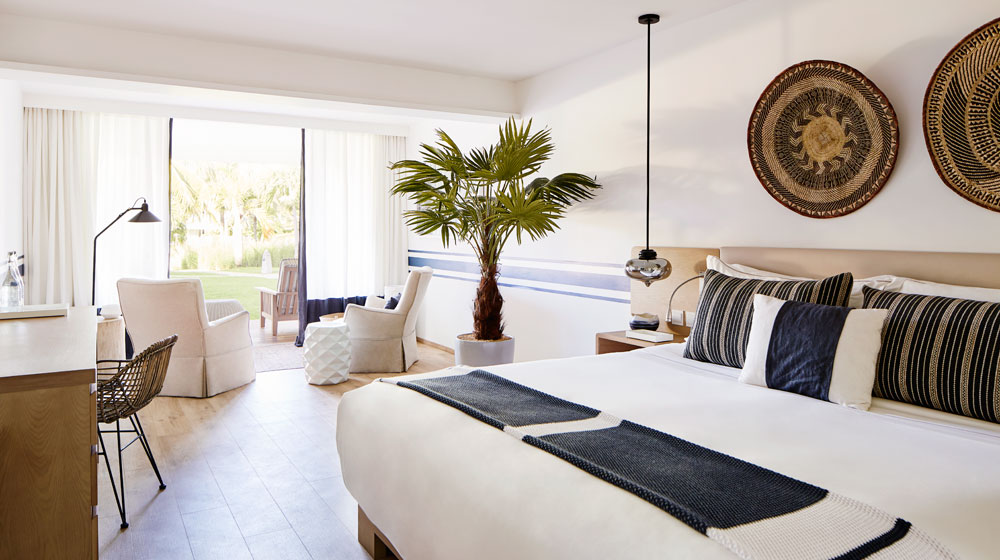 Having already been so impressed by LUX* Grand Gaube, I did have to wonder how this Mauritian luxury resort could possibly have a new sibling that was different. Well, guided by Lux Collective’s visionary CEO Paul Jones, SALT of Palmar, which opened 1 November 2018, is as different from LUX* as black is to white – or, in this case, whereas LUX* properties are known for empathetic taupe and white Kelly Hoppen interiors, SALT is as colourful as can be. And SALT has what is claimed to be this Indian Ocean island’s first rooftop bar. 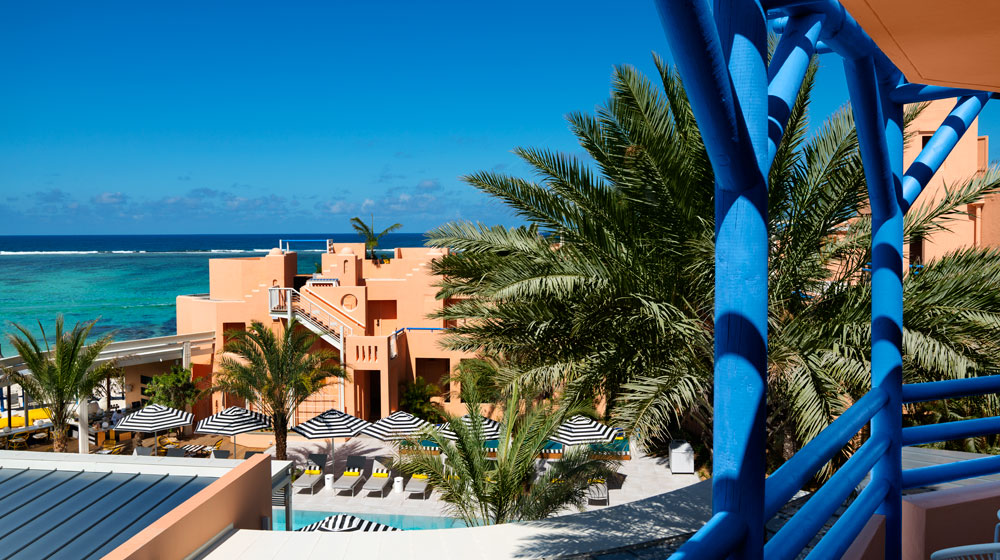 Arriving at the 59-room hotel, previously the Palmaraie, you look past the pool to the sea. Around you, the three-floor C-shaped building is a riot of blocks of colour, which extends to stairwells (this was an old building, with no elevator, so you get a good workout going up to your room). For SALT, Paul Jones deliberately turned to an artist rather than an interior designer. Be different, he told Camille Walala, and you can see the colourful result.

Paul Jones worked on the SALT DNA with Katie Brinsmead-Stockham, a gig-economy Londoner. SALT is eco, saving the world through the locale, which includes your immediate neighbours round the pool or in the casual restaurant (no buffets, to reduce waste, and as much food as possible will come from a designated artisanal farmer). 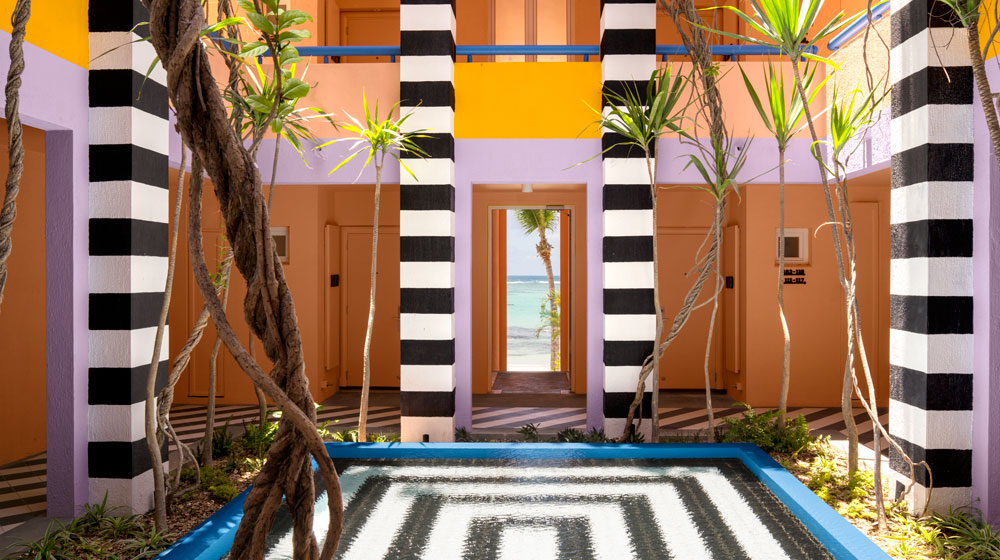 You are not expected to spend time in your bedroom here. There is no mini-bar, no television, but you have a few carefully chosen books, a Carpe Diem bed with 500-thread sheets, and the softest possible pale lemon, washable robe, apparently made from coffee grounds. You have a yoga mat, but there is also a good, if bijou, gym (24/7, which is not as ubiquitous as it should be on this island). I was also really impressed by the five-room Equilibrium Spa, which has a salt room, its walls and floor covered with rough Himalayan salt, the entire space gradually, in turn, going through all the colours of the rainbow. 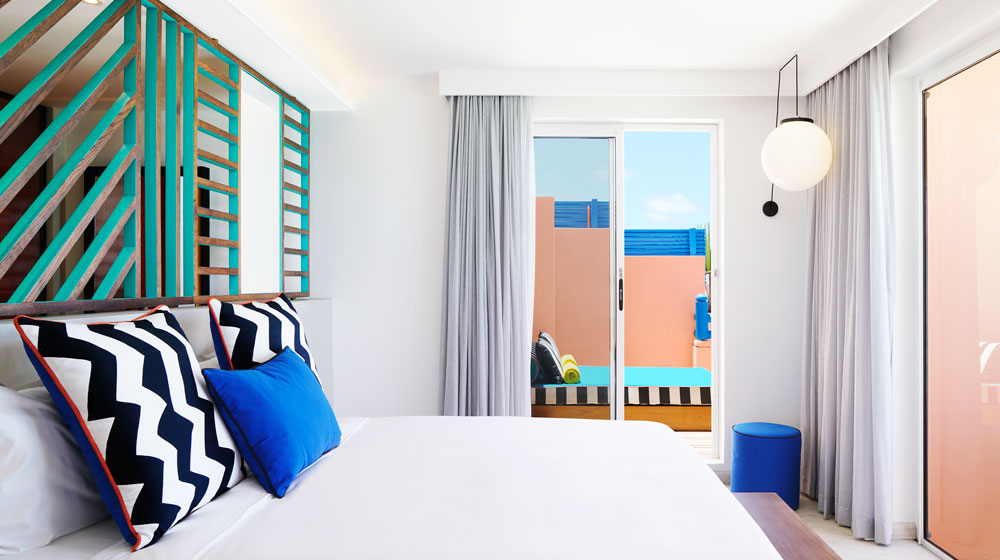 As part of the community involvement that is integral to the SALT culture, Skill Swap is one of its unique, and commendably trendy, elements.  Teachers, for instance, can be put in contact with local schools by one of the hotel’s concierges.  The hotel’s 140 staff also volunteer, say by giving blood, or working with local charities, and they are reimbursed with time off. (All staff, by the way, have at least 168 hours of training, in work time, every year). 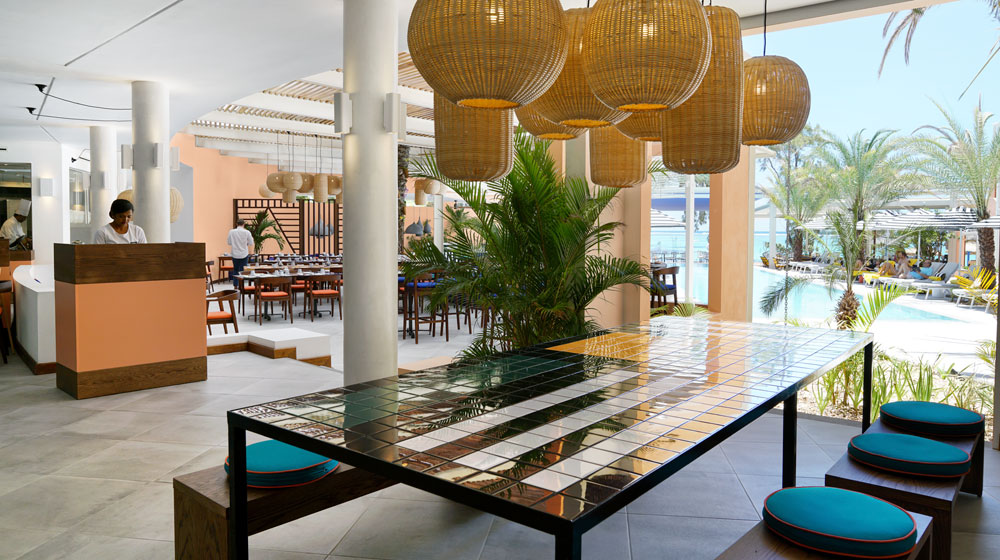 Yes, SALT is a really thoughtful new-wave luxury hotel: the restaurant even has a 100% vegan raw section, with zucchini pasta and cauliflower biryani. It also has, as one of its morning options, what it calls a ‘big brekkie board’, which consists of eggs with baked beans, smoked bacon, avocado, potatoes, sausages and tomato, plus barbecue sauce and sourdough toast. The idea of no buffets, says hotel GM Raj Reedoy, is to cut waste.

Dec 2, 2022
Prev Next 1 of 2,167
Tweets by LATTEluxurynews
Subscribe to the LATTE enews
Enquiries