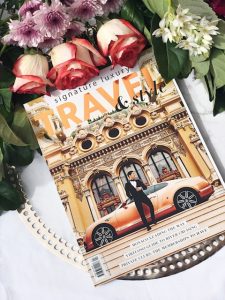 Signature Luxury Travel & Style has cemented itself as the leader in the luxury travel magazine sector and now the travel magazine industry as a whole. This has been achieved through its unique distribution strategy and channels adopted in a market that has seen dropping retail magazine sales globally.

According to Cathy Wagstaff, Publisher and Editor-in-Chief of Signature Luxury Travel & Style, the company pioneered its unique distribution strategy, which includes positioning where key target audience – and thus its advertisers’ key markets – are in a position to relax and consume print media. This includes placement in leading five-star hotel and resort rooms across Australia and the Asia Pacific region and airline lounges, including Qantas Chairman’s Lounge, First Class Lounge and Business Class Lounges.

In addition, readers will find copies of Signature for their perusal in private cars and limousines, private clubs, spas, yacht clubs, polo clubs and luxury car dealerships and service centres including Maserati, Aston Martin, Bentley, Lamborghini, Audi and Rolls-Royce, as well as select travel agencies for luxury advisors and their key clients.

“An audited figure is critical for advertisers, marketers and media agencies in today’s publishing environment. Transparency verifies a magazine’s reach and builds trust in its credibility,” Wagstaff said.

“AMAA industry research has confirmed that independent audit of circulation almost doubles the trust factor in a media brand … 8 in 10 marketers and media agencies [agree] that they prioritise media channels that supply transparent, audited data. Accordingly, 9 in 10 agreed that trust increases their willingness to commit spend,” says Josanne Ryan, CEO of AMAA. “The AMAA congratulates all the publishers who commit to transparency and accountability through being audited under the CAB audit rules and releasing publicly audited data.”

Why has Celebrity Edge been a magic carpet ride for Aussies?