Mary Gostelow on the French Riviera

Up close at Hôtel Belles Rives and Le Negresco

Juan-les-Pins is under-the-radar French Riviera: those who want to be seen head for Cannes or St Tropez; those who do not want to be trailed by paparazzi are more likely to head for this part of the Antibes metropolis. It goes back to time immemorial, but its modern history really kicked off when Frank-Jay Gould opened a hotel in May 1927. Two years later, Russian-born Boma Estène and his wife Simone, who came from a family of Antibes hoteliers, converted the Villa St Louis, right on the coast, to what is now the luxury Hôtel Belles Rives, part of Small Luxury. Today, says the gal, it is owned by the Estènes’ great-granddaughter, Marianne Estène-Chauvin, and run by her son, Antoine Marianne Estène-Chauvin, and GM Stéphane Vuillaume.

I stayed in the 610-square-foot Zelda Suite, overlooking the water immediately in front. It is named for the wife of F Scott Fitzgerald, who somehow started Tender is the Night while they both lived here (how he had time and patience to write while it appears Zelda was already going mad and the two fought continually is hard to imagine – plus, the area was full of socialites). Tender is the Night, for instance, is written about a fictional couple, Dick and Nicole Diver, thought to have been based on Gerald and Sara Murphy, who lived nearby in Villa America. This was the period of Great Artistic Talent Grand Tours; Ernest Hemingway was a regular to Juan-les-Pins, as were Maurice Chevalier and Pablo Picasso. Did they too, I wonder, look out of this 44-room hotel’s windows for inspiration?

Thanks to the Estène-Chauvins, the arts association continues. There is a Fitzgerald literary prize every June; current winner of the eighth Claude Aïelio ceramic trophy is New York-based Christopher Bonnen, for Beau Ravage (Bonnen is Editor-in-Chief of Interview, and he writes regularly for such publications as The New York Times). There is also a five-yearly Gatsby prize, currently held by Frenchman Nicolas Rey for Dos au Mur.

And more art. Take the hotel’s Michelin-starred restaurant, La Passagere, overall white for simplicity and as balance, perhaps, to the blue of the sea and sky outside. The room’s columns, however, are enlivened with Picasso-like cartoons, and hanging strategically through the rooms are dividers of coloured glass, both of which are by Patrick Ifergan.

Chef Aurélian Véguand’s menu certainly highlights proximity to the sea. Starters are bundled together as ‘Weigh anchor’, and main courses are ‘Sail away’. I had the good luck to dine with Antoine Chauvin-Estène, and loved the homemade warm loaf round with soft butter, infused with local seaweed. My artichoke tart shared billing with its black truffle accompaniment and, after a scallop presentation, I had to try something with lemons, for which this area – especially Menton – is renowned. For gastronomic heaven, dessert addicts choose the lemon soufflé with calamansi sorbet. Then, like regular movers and shakers (and a few first-timers), head to the adjacent piano bar, perhaps for a Gatsby (gin with lychee and violet syrup) or a Hemingway (rum with cherry Marasquin). 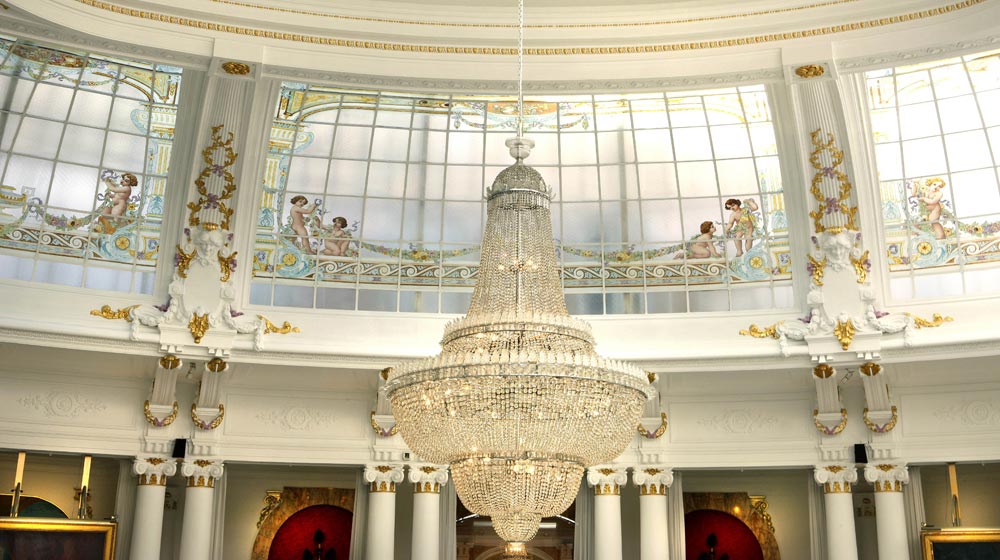 But of course, I also needed to visit one of the Riviera’s classic hotels, so I went back to Le Negresco, Nice. Every year there is something new here. Take room 422, called the Gaultier Suite, even though it is merely one bedroom, one bathroom. Designed by the hotel’s own people, it is dedicated to a regular guest (though one wonders if Jean-Paul Gaultier would have this ‘car wreck fabric’ in his own home). One door is covered with the fabric, as are walls and both of the side-by-side bedheads, with plain fabric to form the fronts of what look like jackets. 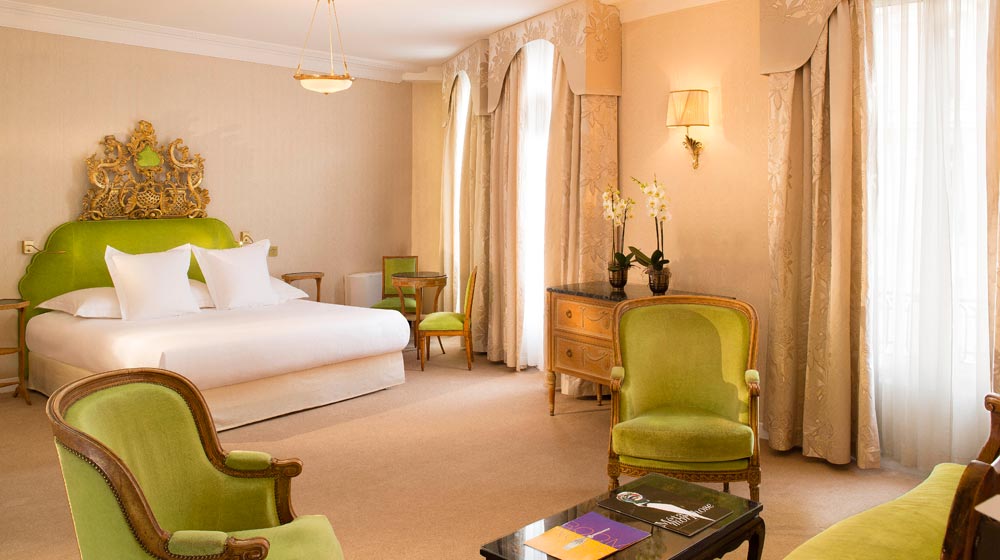 The other main innovation here is the arrival, three months ago, of Virginie Basselot, one of France’s two MOF (Meilleur Ouvrier de France) chefs. Born in Normandy, she wanted to be a fighter pilot but, instead, followed her father into the kitchen. At Le Negresco, she looks like a fresh teenager. In fact, I am told, this MOF never raises her voice in the kitchen but when she needs something she merely taps her cooking spoon against a hard surface and the seen-it-all guys around fall immediately quiet in awe. And she does cook like a dream. She sent out amuses, one-bit salmon gougères and tarts and this marvellous sea-urchin (oursin). 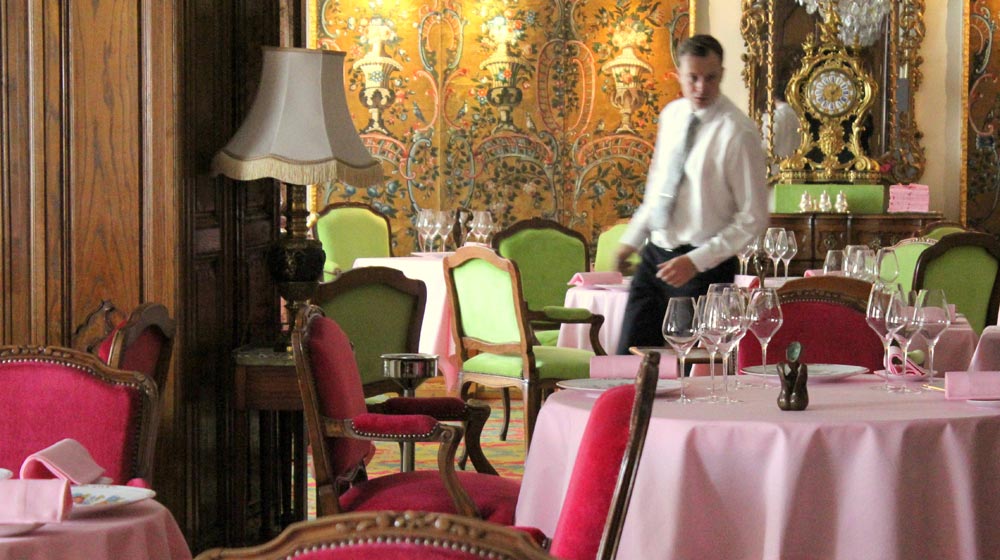 Le Negresco’s fine dining restaurant, Chantecler does offer a seven-course tasting menu, with five paired wines as requested, but we went à la carte. See my chosen starter, a tartare of seabass and oyster bound with lemon cream and topped with Sologne caviar from the Loire Valley. I went on to a Basselot long-time signature, fillet of cod cooked with seasonal vegetables and, served on the side, a lemon balm butter. We drank the most local wine available, Le Clos dos St Vincent 2017, Vin de Bellet. It was lovely to see the new-look restaurant, complemented by a noticeably Gen X of keen and well-trained servers. 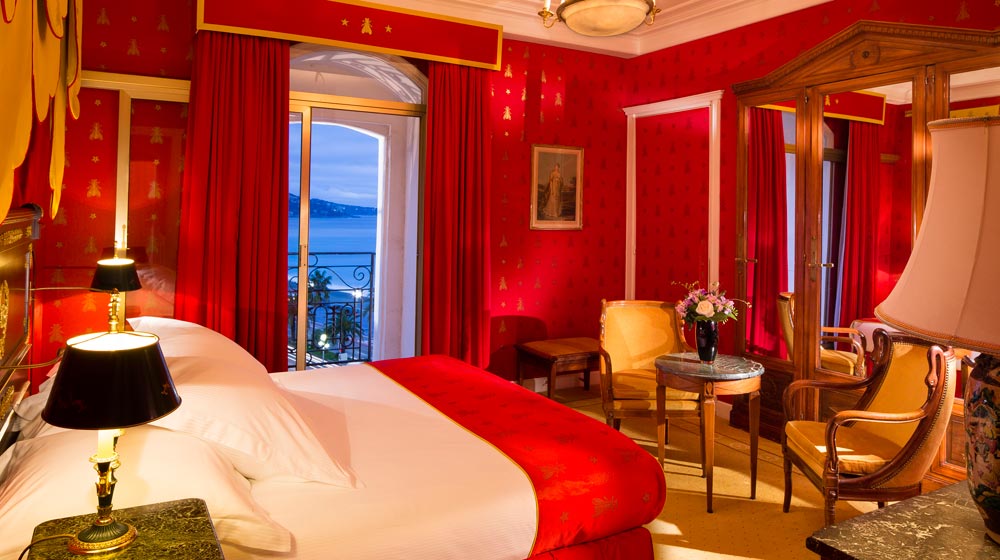 Right now Pierre Bord is supervising a complete re-do of La Rotonde. The restaurant once had rotating carousel horses but they, and it, died a prolonged death. Paris designer Marc Hertrich, also working in Mauritius on Constance Hotels’ forthcoming C Resorts, is here finishing a new look, with a sky ceiling that will give a fresh 21st-century look. In the meantime, the Bord-Basselot team has created LePopup37, an absolutely charming temporary day- and evening-long base for Niçoise food with a vibrant touch. I could only try it at breakfast, but the baguettes and Poiläne-type sourdoughs and Savoie yoghurts and butters were truly the best. The salt and pepper mills, of course, were Peugeot; the French support their own products!