Sommer was promoted to the position last year and is responsible for sales, marketing, public relations and office operations for Norwegian Cruise Line, Oceania Cruises and Regent Seven Seas Cruises in all markets outside the United States and Canada.

A 25-year cruise industry veteran, Sommer joined NCLH in 2000 and rejoined in 2008, serving in various executive capacities including, most recently, EVP international business development since June 2015. He has championed the growth of the company’s international division, increasing NCLH’s presence worldwide and opening 13 offices globally including, most recently, Auckland, New Zealand and Tel Aviv, Israel.

He was in New Zealand and Australia this week for the debut of Oceania Cruises’ Insignia following her refurbishment as part of the US$100 million OceaniaNEXT multi-faceted initiative. Photos of the revamped ship are pictured below. 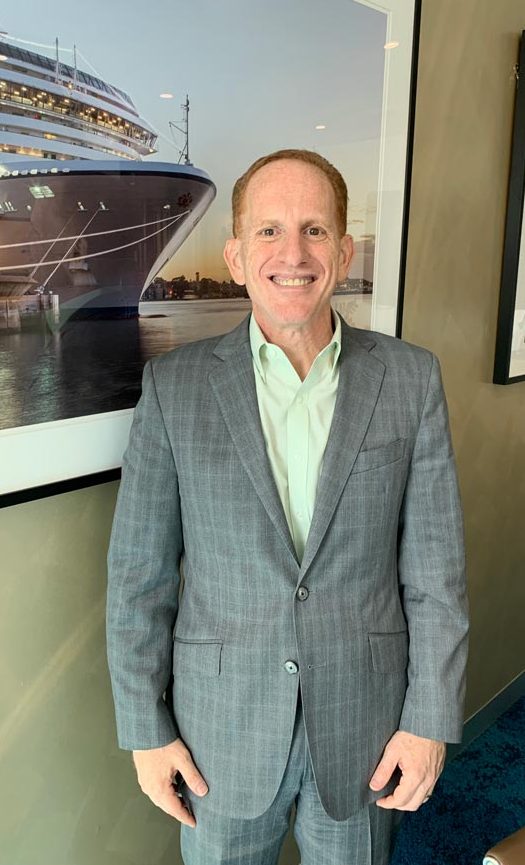 Harry, can you tell me why Oceania Cruises embarked on this massive “NEXT” project?

Oceania has been doing well but two years ago we wanted, from a strategic perspective, to think about what is going to propel the brand into the next decade. At the time we were already well-known for having excellent cuisine but the original four ships in the fleet – Insignia, Regatta, Sirena and Nautica – were coming up to about 20 years of age. We needed to make a decision about what this brand was going to represent.

The senior management group sat down to map out our vision and discuss: what resonates best with the brand? What are the most important things, what are our USPs [Unique Selling Propositions]? We already were known for our wonderful service and destinations, and those aspects continue to be brand pillars, but we also wanted to focus on the ship experience and cuisine. We wanted to double down and really emphasise cuisine even more then we have been already. So OceaniaNEXT revolves around the whole product, but those are the two pillars that we’re focusing on right now. The cuisine and the hardware.

What work is being carried out on Oceania’s hardware under OceaniaNEXT?

Our four original ships remain beautiful. No-one makes 700-passenger ships anymore for many reasons, primarily economic, but we have this wonderful product and we thought, what could we do to elevate it even further?

Twenty-year-old ships, while they were nice, were still 20-year-old ships. We decided we could either do a typical renovation where you change the carpet and replace the drapery, or we could go all in. And so we decided to go all in, spending $25 million on each of those ships – $100 million altogether. It’s a massive investment for a ship of this size. Some cruise lines don’t spend even $10 million on a typical dry dock for a ship that’s probably five or six times the size of these ships. 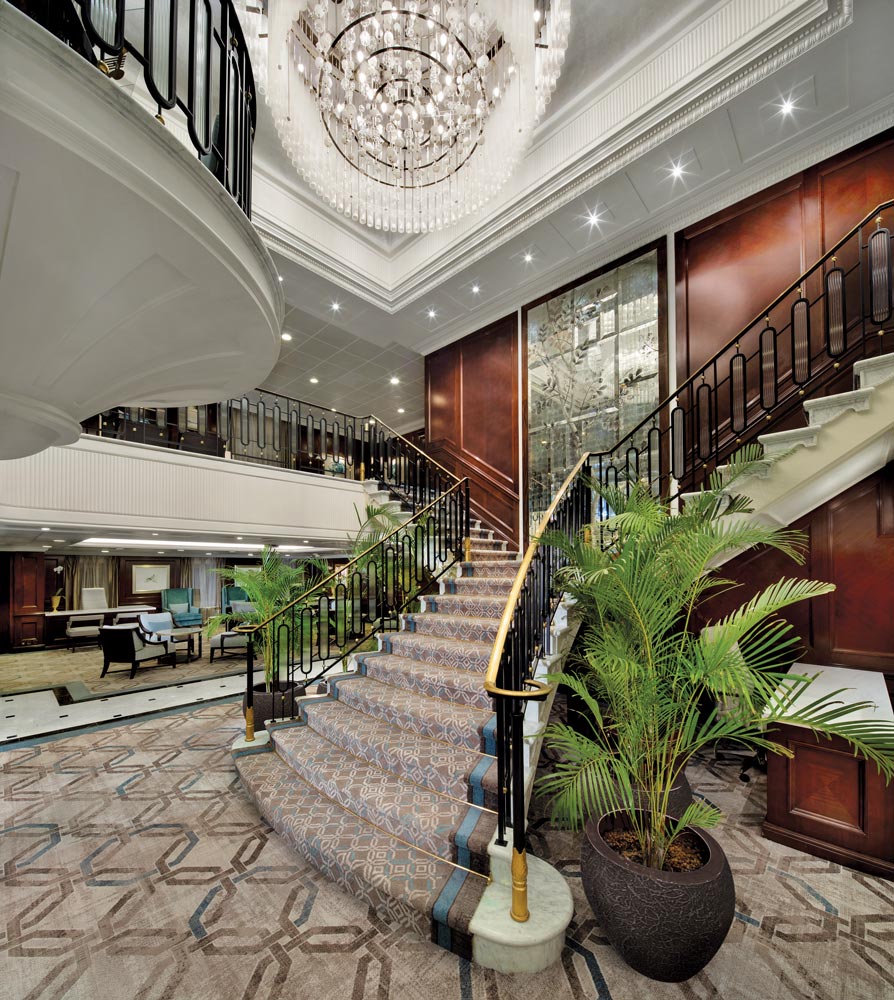 We really tore the ship back to the steel and replaced probably 80% of it. Every single cabin has been redone: lighter pallet, more modern decor … they are absolutely breathtaking.

When I saw the Insignia for the first time in the flesh in Auckland a few days ago it took my breath away. Pictures don’t do it justice. When you see it in person it’s like, ‘wow, this is really really fantastic’. The attention to detail, from the colour palette, the crown moulding on the ceiling, redoing the staircase … everything is extraordinary.

And it’s not typical that all four ships would be in dry dock within one year. That’s very unusual. Usually, they’re staggered a little bit more. Sirena is going to have the same treatment in May, and then Nautica and Regatta; one will be in September in Seattle and the other in early 2020.

Which parts of the ships weren’t upgraded, and are there plans to do this at a later stage?

We didn’t do the theatre and a handful of the public rooms. But not many. I’m sure that’s in the pipeline. Vessels tend to go into dry dock every two to three years. My guess is that it would be done then.

And Marina and Regatta are also in line for some work?

We’re going to be refurbishing those ships afterwards. We’ve already announced the first component though, and that is going to be a complete redo of the Owners Suites with Ralph Lauren Home. I’ve seen the renderings and my guess is, as with the other ships, the actual experience is going to be even better than the rendering and I look forward to seeing those as well.

Why is there such a focus for Oceania on cuisine? And what does that entail?

There were many things that we’ve done on the food side. We completely revamped the menus in all of the restaurants, especially the main restaurants. We introduced La Cuisine Bourgeoise last year. Our Executive Chef Jacques Pépin is very famous and was previously the chef to the French Head of State back in the ’60s and ’70s.

We asked Jacques to think about the best meals he prepared around the holiday season, and so we took those dishes and we made one incredible meal. It’s one of those decadent things where the entire meal is something like 10,000 calories. Don’t eat for a week beforehand!

It was really, really well received but we didn’t stop there. More recently we introduced our new Dom Perignon Tasting Menu, where we get a number of different vintage of Dom Perignon champagnes and we couple that with specially prepared cuisine to bring out the flavours of the different vintages. It’s only offered on Riviera and Marina. That’s about as close to a once-in-a-lifetime experience as you can get on a ship.

And then the other component of the food was that we introduced a whole series of themed shore excursions. We go to winemaking regions or local farmer markets and you shop for a meal. Then guests go to our culinary centre on board the ship and actually cook the meal together, if that’s your thing. Some people like to serve, some people like to do.

Really, it just reinforces our position as the leading cuisine cruise.

Just recently, NCLH announced two new ships for Oceania as part of the OceaniaNEXT project. What can you tell us about the Allura-Class of vessel?

Our 1,250-passenger Marina and Riviera ships are absolutely fantastic and we love them. The new Allura-Class is going to be around the same size. But what we’re going to do is remove a few of the cabins so we can create a few more culinary experiences; we’re all about food. Marina and Riviera already have six restaurants which, for a ship of that size, is unusual. But with the Allura we’re going to add a few more culinary concepts.

We’re going to add a few single cabins, which is something that will be new for the brand. We’ll continue to innovate on the decor side, to make sure that it is contemporary and beautiful.

I saw the initial renderings and they are really, really nice so I’m guessing the actual ship will be even nicer.

It’s not really going to be revolutionary, it’s going to be a continued evolution of the product. A guest who has been on the newly OceaniaNEXT-transformed original ship will be very comfortable on the Allura-Class. It’ll be more similar than different.

So single cabins are new for Oceania Cruises?

Yes, within the demographic of Oceania Cruise passengers – we have people between 60 and 80 years of age – there are single people, so we want to offer them a solution.

What’s unique about the Australian and New Zealand market?

Two of the things that are unique about the Australian market are that they go for the casual, elegant style and do not necessarily want to wear tuxedos or ties. Oceania is a great fit. And of course, Australians are known for being food connoisseurs, so this pairing and what the brand stands for seems to resonate particularly well in the Australian and New Zealand market.

How important are travel advisors to Oceania and NCLH as a whole?

Travel agents are critical to us. The overwhelming majority of our business comes through the trade and without trade support there is absolutely no way we can be successful here.

We have an entire team of sales: we have Lisa, Steve and Nicole, who are out there working with the trade community to generate demand with frontline agents, to have them visit ships, to understand the product.

It’s absolutely critical to us and we are hugely thankful for the travel agent community for what they’ve done. We’ve more than doubled our business across the three brands since we opened our office here three years ago, and the overwhelming majority of that increase comes through the trade, so they’ve been doing a great job. We are very, very appreciative.

Final question, and it’s LATTE’s signature question: what is your favourite coffee shop and what’s your order?

Café is STRETTO in Elizabeth Street, just down the road. Sydney coffee is the best in the world, and I travel a lot. I drink cappuccino with almond milk.

11 questions with… the sales team at Quark Expeditions

Jun 3, 2020
Prev Next 1 of 1,551
Tweets by LATTEluxurynews
Subscribe to the LATTE enews
Enquiries