Mary Gostelow looks at Preferred (and other) luxury in Monte-Carlo

Annual meetings of Preferred Hotels & Resorts are always worthwhile and fun, partly because the company, owned for the last 15 years by the Ueberroths, seems like an extension of this friendly and hospitable family.

This year’s event at Monte-Carlo Bay Hotel & Resort, Monaco [25–28 February 2019] was the most stylish yet. The 274 delegates were welcomed at opening-night cocktails by none other than HSH Prince Albert, who liked the gathering so much he stayed around for at least an hour, talking – and really listening – to many of the luxury hoteliers.

There were quite a few newcomers to Preferred, which has seen the first addition of properties in Hungary and Sardinia to its now-772-strong portfolio in the last year. There is also noticeable growth in hotels that have de-flagged from brands; this list includes The Dominick, New York (formerly Trump Soho) and The Inn at Perry Cabin, St Michaels MD.

Preferred has a good crop of suppliers who showed their wares during three days of educational meetings. I was particularly impressed by Molton Brown, who showed how they work together with a hotel to theme its afternoon tea. I think, too, that Brojure – developed and run by Penny Wing – will pick up a lot of business for its easy DIY online brochure software.

In the main conference venue, sessions were emceed by Peter Hancock, a very-English type with an unending fund of Churchillian stories; he is a professional toastmaster who once produced Johansens, but his day-job now is CEO of the Pride of Britain consortium. Preferred Executive Chairman John Ueberroth said disruptors are here to stay, but they are not hurting business. His daughter and CEO, Lindsey Ueberroth – who is determined that Preferred, and its pineapple logo, will be the most recognised luxury hotel company of independent properties – referred more than once to her belief in the power of travel.

In 2018, Preferred saw its I-Prefer loyalty membership soar 20% to over 500,000 new members, taking the grand tally over three million. We heard of such brand extensions as Preferred Hospitality Solutions, headed by Kathleen Cullen, which offers member hotels help with things such as branding, pre-opening, PR and social media, revenue management and sales. We heard about pop-ups to promote Preferred properties in Amex Centurion lounges. Plenary speakers included Kate Ancketill, founder and CEO of GDR Creative Intelligence, who stressed the need to be different. F&B ‘conceptor’ Tobias Mattstedt, Beyond Hospitality, showed why and how hotels’ restaurants can work.

And talking of food, there was a stunningly sumptuous jazz buffet at the exclusive Monte-Carlo Yacht Club, and at the final gala, we were all reminded that luxury hotels that are part of Preferred can take advantage of the brand’s new partnership with Porsche. So, over one or two glasses of Laurent-Perrier, gala guests sat down to tuna tartare, lamb cutlets and chocolate profiteroles with entr’actes that saw the presentation of Preferred’s Awards of Excellence.

I must give total praise to the host property, Monte-Carlo Bay Hotel & Resort, SBM’s newest hotel. The thoughtful service was exemplary throughout.

While in the Principality, I also had time to have a look at SBM’s Hôtel de Paris. This is coming to the end of a 4.5-year renovation that has been drastic, but the result is a luxury hotel that is even more sumptuous than before.

What opened in 1864 as the 100-room hotel that put Monaco on the world map is now a 209-room luxury hotel that combines past with the present. Architect-designer Richard Martinet has brilliantly created an inner courtyard, complete with palm trees. The lobby, which seems to shine more than ever, now hosts a small reception desk; before, I remember having to check in around the back – that space is now the double-door entrance to the courtyard. 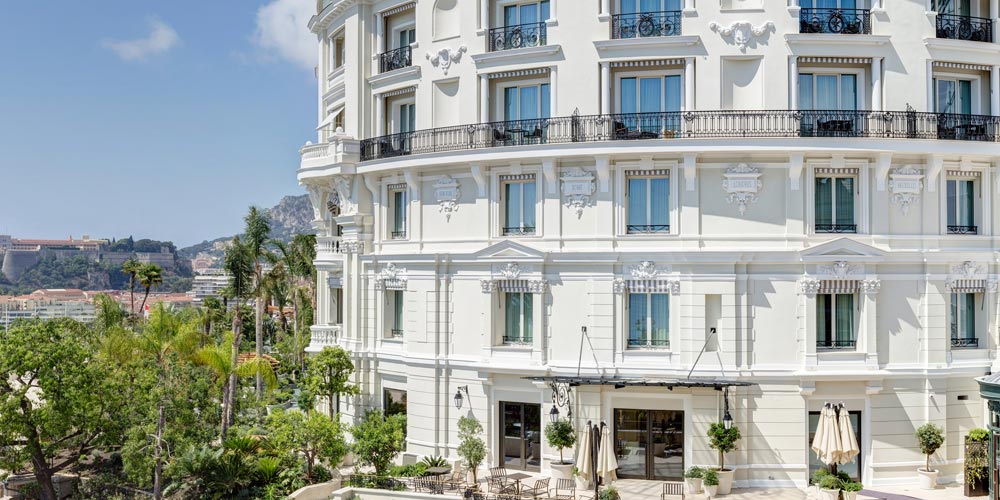 The eight-floor building has stylish upper corridors in soft greys, with hints of gold in the form of hanging art, metal standing lamps and chandeliers in elevator lobbies. Room 590, in the fan-shaped area of the hotel, was light, bright and welcoming. I loved the collage of taupe leathers forming the bed headboard, the Guerlain toiletries and the view from my balcony, across Port Hercule to Quai Rainier III and up to the hill that houses the royal palaces. It was all extremely comfortable and guest-centric.

As if illustrating that a top hotel must be able to provide anything that a customer might want, I had what I thought was an insoluble challenge with my MacBook Air but, my goodness, Ivan Artolli sent up his top techie (who rejoices in the name of Luxmaan) and he did it, with unbelievable patience. 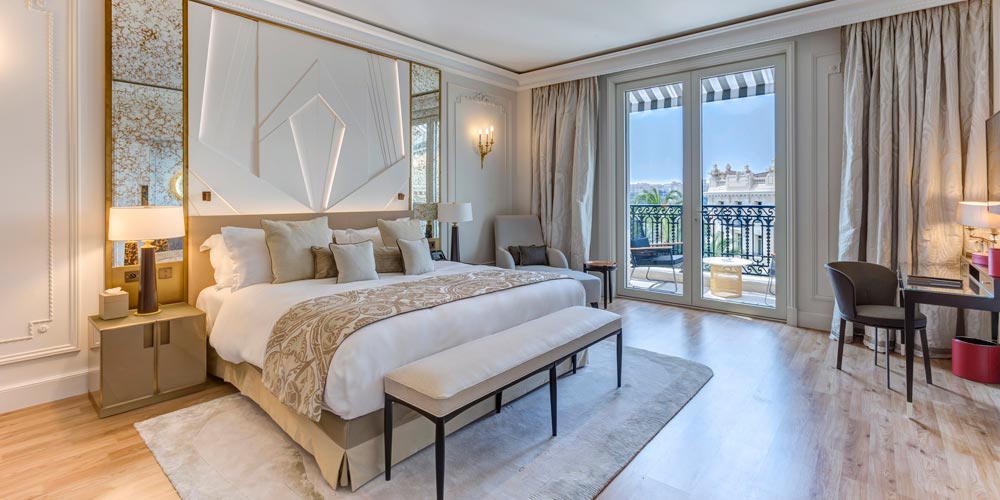 Still to be finished are the hotel’s top-floor Grill and a brand-new gym with outdoor pool. For the time being there is, of course, the celeb-favourite indoor pool in SBM’s massive Thermes Marins wellness club, reached by a subterranean corridor from both L’Hermitage and Hôtel de Paris.

I started my evening with a charming Italian, Laura Ritzu, in the Bar Americaine, drinking a local Bandol rosé (Chateau de Pibarnon 2017) and listening to a jolly jazz group. We moved on to O Mer, a new restaurant on the group floor (this is designed by Pierre-Yves Rochon, who has cleverly put lots of mirrors on inner walls that divide the space into more discreet areas). Alain Ducasse, whose signature Louis XV was closed that night, here does Eastern Mediterranean, which to him means excellent mezze – any three dishes for a total of 21€ – followed by, say, lamb shawarma, served in a pita envelope with a Romaine salad. 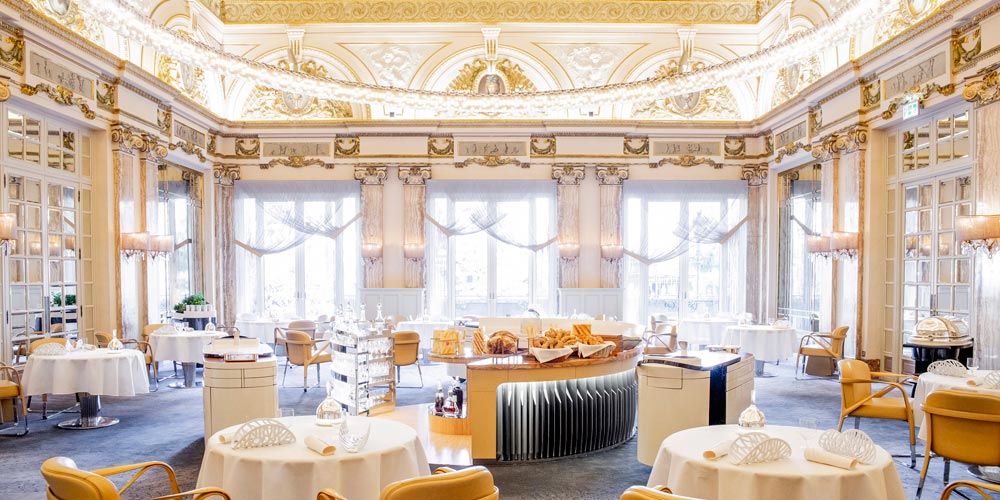 It is lovely to be back in Monte-Carlo for many reasons. The weather, even in February, is divine, and working out in the gym as the sun comes up is very special. The outstanding breakfast buffet that I remember from years past has gone, to be replaced by the Ducasse meal.

As at the Plaza-Athenée in Paris, a curate’s stand is brought, holding slices of healthy real bread as well as croissants. The 40€ continental breakfast, O Mer-style, generously includes a small smoothie and a honey-topped, orange-scented homemade yoghurt (add eggs for another 6€). Soon, apparently, the hotel will have its own bakery, serving all SBM hotels as well as its super-super residents, One Monte-Carlo.

As I had yet another cup of excellent coffee, Ivan Artolli shared his own enthusiasm for Monte-Carlo; he was at this luxury hotel a few years back, in fact. There is so much going on, with the Grand Prix and an annual yacht show, art exhibitions and circus and opera, and now auctions … but alas, I had to leave. 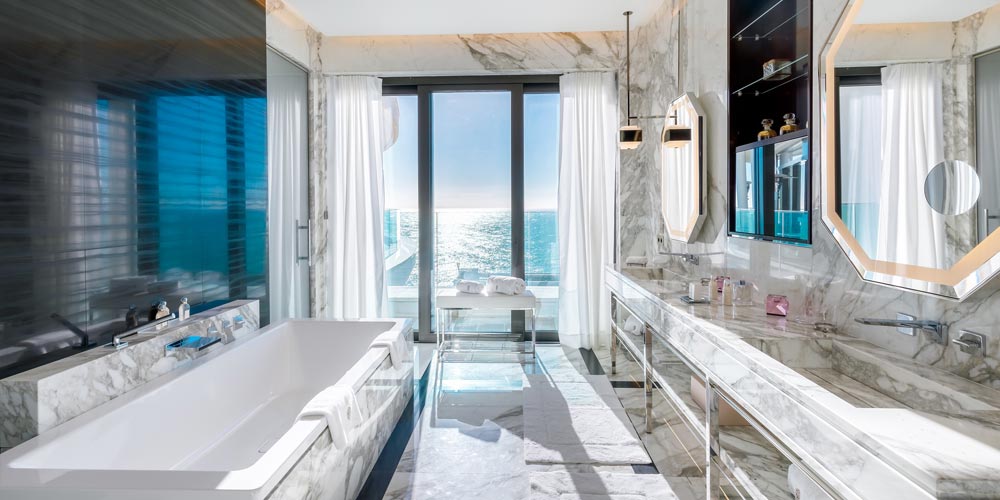