Mary Gostelow heads for a pair of Bogota beauties

Colombia is rock-and-rolling, and not only because of the irresistible vibe of Cartagena. The capital, Bogotá, is booming. Tourists love its quaint areas, its cafe culture, its art and fashion boutiques and, of course, its marvellous gold museum. Other draws are graffiti tours, coffee tastings and escorted bike tours.

I was really looking forward to returning to Bogotá for many reasons, not least of which was to see Four Seasons’ two new hotels. Yes, as of 2016 Four Seasons has not one but two unique properties here, only 15 minutes’ drive from one to the other. They do have similarities. Both are upgraded existing hotels, formerly flagged as Charleston, and both remain owned by the Gilinski family. Both have 24/7 gyms and, of course, a myriad of Four Seasons’ luxury touches. Other than that, both are one-offs. 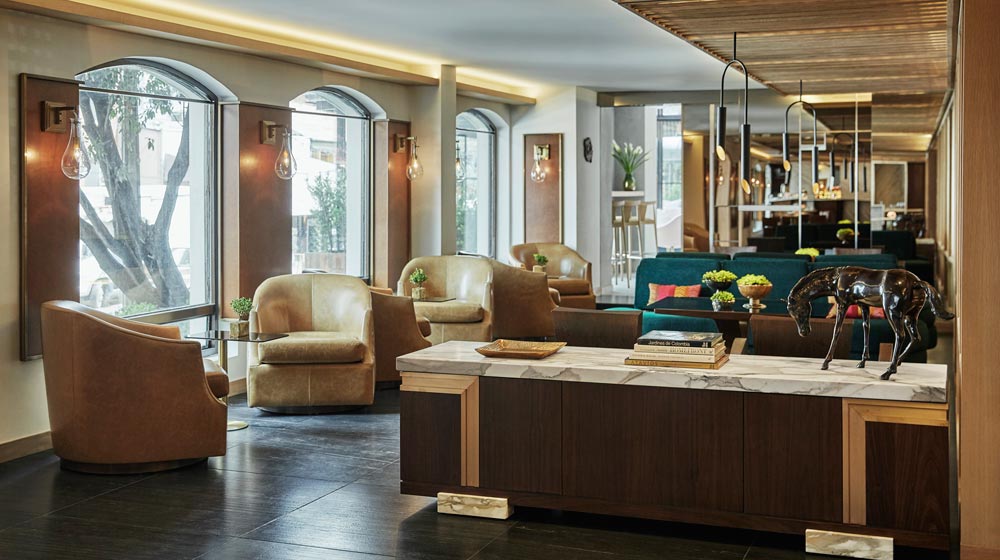 First, the larger of the two, the 64-room Four Seasons Hotel Bogota, in the Zona T, a seriously happening area of town. From the street, you see what it really is: a 1988-vintage brick building. A discreet sign set into greenery either side of the entrance steps announces that this is, indeed, the hotel.

I arrived at the horrid hour of 01.30 (who says I have a lovely life?). They were expecting me, they showed me up to room 653, a 460-square-metre beauty, and I collapsed into bed. In the morning, pulling back the taupe drapes, decorated with white yarn threaded in and out as beads, I looked out into a busy street, immaculately clean thanks to an army of sweepers in royal blue uniforms parading, with their bins, as they started their shift. 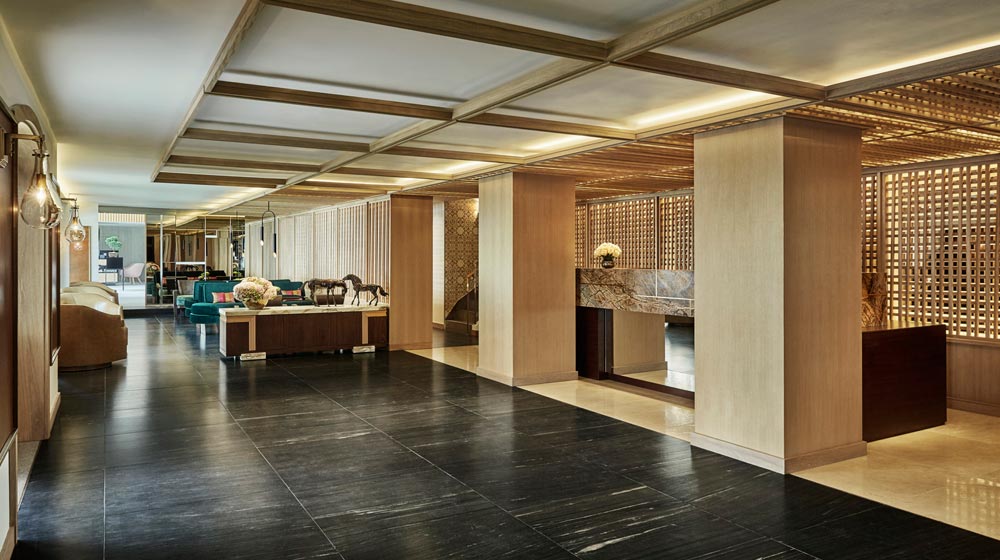 I headed down and through the lobby to the restaurant, Nemo, which is actually a standalone and highly popular place that few locals associated with beds (Colombians do not ‘do’ hotel restaurants, I was told). Nemo is apparently the nickname of the father of Harry Sasson, the celeb-chef who fills the place for breakfast. He certainly knows how to make good coffee, as I expected in Colombia, and I loved the buzz of the place. 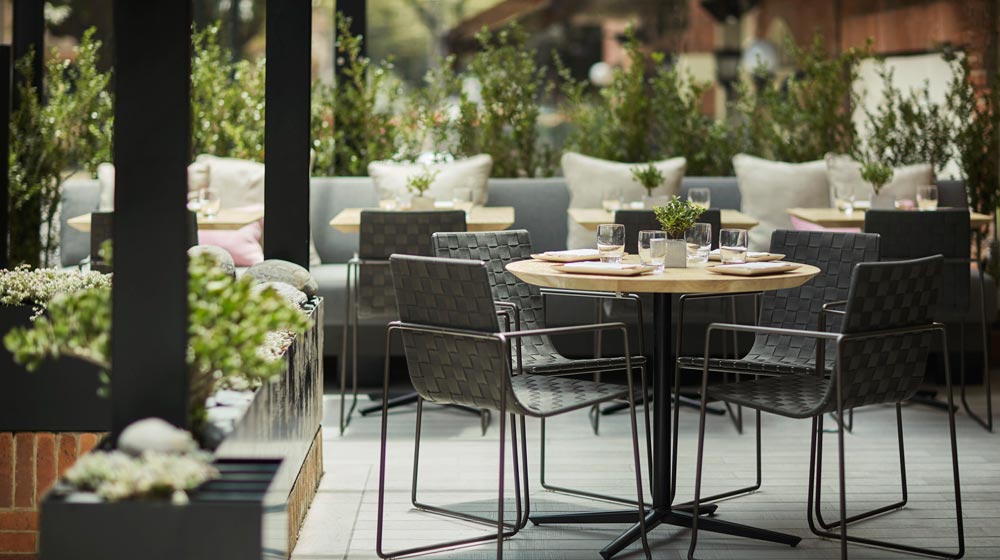 Nemo has a street-set terrace in front and, at its rear, a greenery-filled terrace that can be sold separately as a venue for up to 40 (its glass roof can be closed if it looks like rain). This is a very clever operation: even the space between Nemo and hotel lobby – closed off after breakfast to further the feel of a separate restaurant – can be sold for private dining. Mark Bingle runs both this hotel and its symbiotic sibling (it would help to have a helicopter, he said, explaining how he spends a lot of time commuting from one to the other when he would rather be talking to guests). Both hotels are corporate during the week, with guests choosing whichever property is nearest to their place of work; here, banking, oil and gas, plus Netflix–Dynamo and other entertainment predominate. At weekends, leisure business is more determined by the age of guests. Regulars appreciate that half the inventory is suites, prime of which is the 115-square-metre Penthouse Suite. 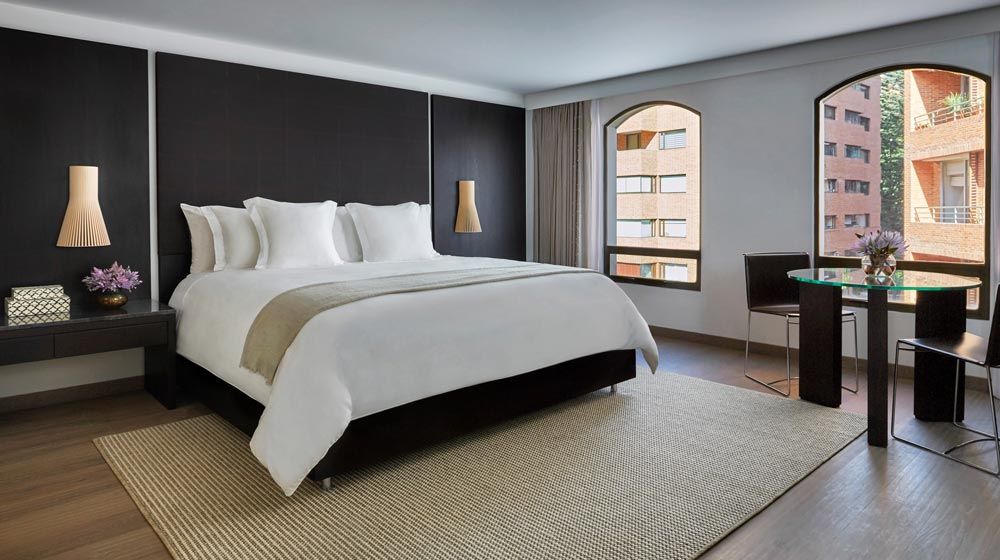 Here at Four Seasons Hotel Bogotá, the local nightlife is a strong attraction. Millennials and lifestyle lovers know they are only a few minutes’ walk from many of the best places in town. To keep themselves going, they can stock up energy with a really good Matrix gym, and try some of Harry Sasson’s local comfort dishes, even a simple salad which, Nemo-style, has not a green leaf in sight but lots of bite-sized bits of green avocado and heart of palm. And for those who have been clubbing all night, what is better than a Colombian breakfast to start the next day, with rice, chorizo, blood sausage and slow-poached egg?

Four Seasons Hotel Casa Medina Bogotá works with an Uber-type service that can transport you between its two hotels. Casa Medina, 15 minutes away, was finished in 1946 as an apartment house; developer and architect Santiago Medina Mejía, after whom it was named, deliberately created a traditional Spanish-style palatial mansion, furnished with wood, tiles and other bits rumoured to have been scoured from Colombian convents. Goodness knows where he found the formidable lady whose portrait hangs in the hall. Since young and aspiring Colombian women do all they can to enhance their looks, it is doubtful if La Señora Doña Maria Thadea Gonzáles, who became Marquesa de San Jorge de Bogotá, would stand much chance today. 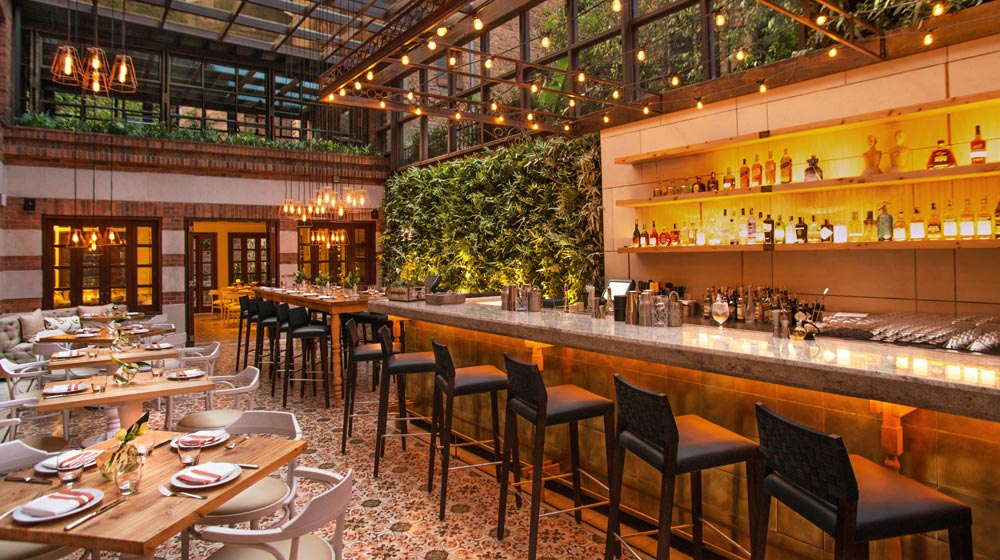 Weekdays, once again, all 62 rooms are filled with business guests. Weekends, a crowd about 15 years older, on average, seem just to revel in this magnificent building. There are inner courtyards with seating among living greenery. The restaurant here, Castanyoles, is one inner courtyard that has been glassed over, its interior walls thus brick, partly covered with living wall or glass. Flooring is patterned tiles, suitable for the cuisine, normally all-Mediterranean, but my visit coincided with an Italian promotion, highlighting dishes culled from Four Seasons’ hotels in Florence and Milan. (I had a great starter of deep-fried calamari, large enough, as is the Colombian wont, for at least four people, and the side of asparagus was honestly better than anything I can buy back home, which usually comes from Peru.) 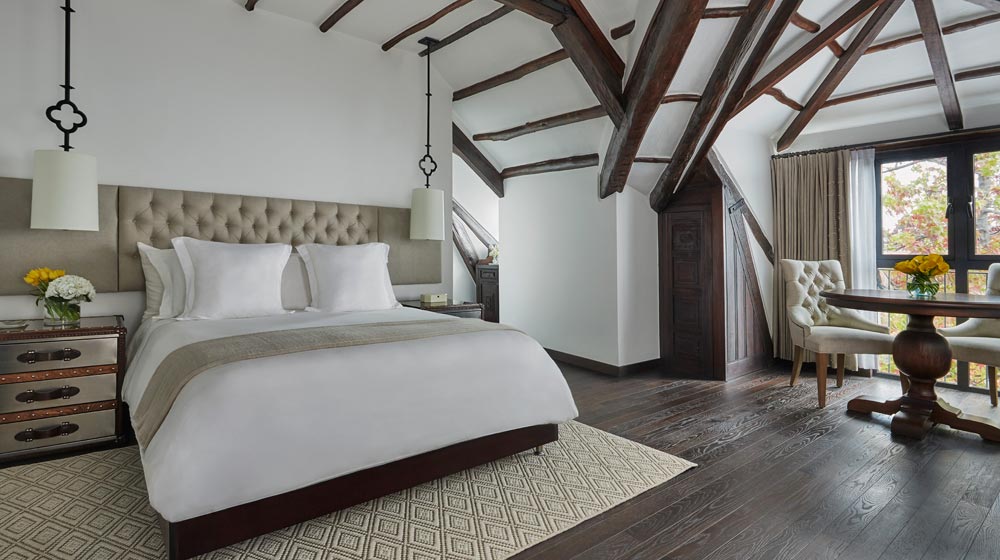 Several of the inner courtyards and public rooms have real-log working fires, as 21 of the bedrooms. I was lucky that room 422 had a fireplace, and a keen young front desk man arrived with a pack of firelighters and in no time had a blazing fire going. The room looked out two ways, into the treetops of a courtyard and also into a street. I had the same textured drapes as in the other Four Seasons, the same local toiletries (Acacia Del Amazonas toiletries from Loto del Sur), and, once again, a simple-to-use Nespresso machine. The gym here is Technogym and, to be honest, not as well-equipped as the other hotel’s. If Casa Medina addicts want exercise, they can walk the oval stairwells, looking at 1946-vintage stained glass on the way. For me, it was 60 stairs from the fourth floor to the lobby, arriving near the VIP entrance, which has a grand piano all ready to serenade a Head of State on arrival. 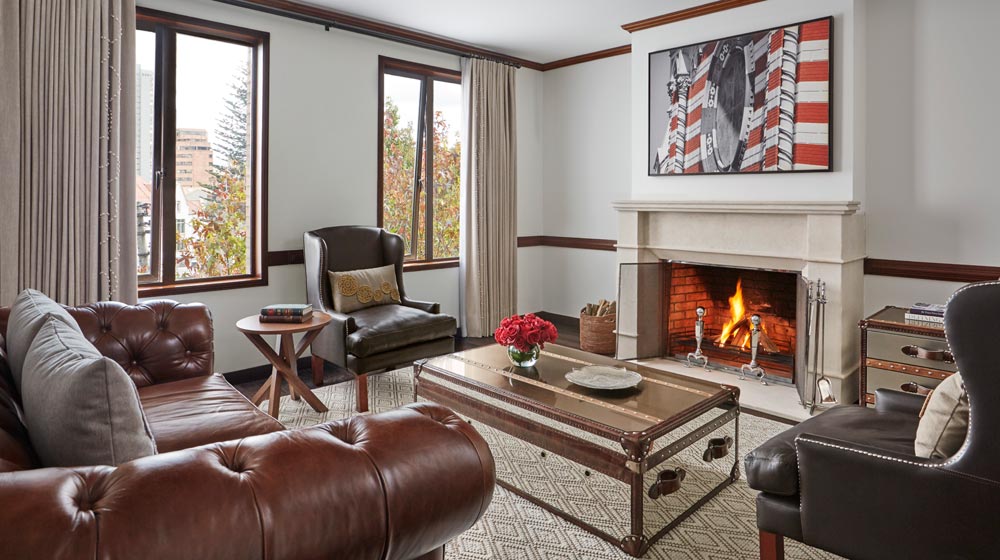 And these Top People certainly come. Entertainment business here is huge, fuelled by Law 1556, generally called ‘the Location Law’, which reimburses up to 40% of all expenses on movies shot in Colombia. Netflix, for instance, works with a local production company, Dynamo, founded in 2006 by its Bogotá-based CEO Andrés Calderon. Dynamo has shot movies with Antonio Banderas and Tom Cruise, and the pair, Dynamo and Netflix, are the genius brains behind Narcos, the series based on drug kingpin Pablo Escobar (the latest series, released November 2018, is, however, set in Mexico in the 1980s). So, you see, there is lots to bring interested travellers to Bogotá. 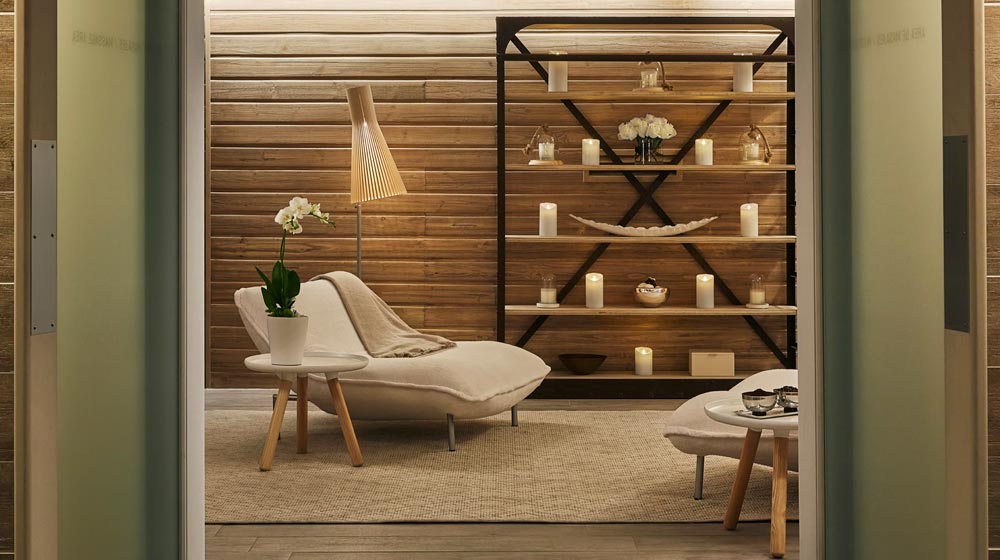 Etihad guests members can now use miles to bid on upgrades

Mary Gostelow is emotionally awed by the Negev Desert