Mary Gostelow says Belmond now has London, and it adds to its Italy collection

Fly into London and immediately feel at home in a hotel that recalls the classic ‘English townhouse’. Belmond Cadogan, London, opened at the end of February 2019. It cannot be said to have reopened its doors as, apart from a staircase, nothing remains of the original hotel.

Built in 1887, it was home to actress Lily Langtry (the ‘Jersey Lily’) from 1892-1897. Oscar Wilde was also arrested here in 1895. Those who knew the hotel since the beginning will be amazed at the size of its lobby today. The owners of the hotel, Cadogan Estates and designer GA International have put it back on the map with their purposeful renovations. Belmond Cadogan is now a statement. Even the doorman dresses like a Mary Quant-style Chelsea Pensioner in bright scarlet and black trims (designed by Debbie Leon of Fashionizer). 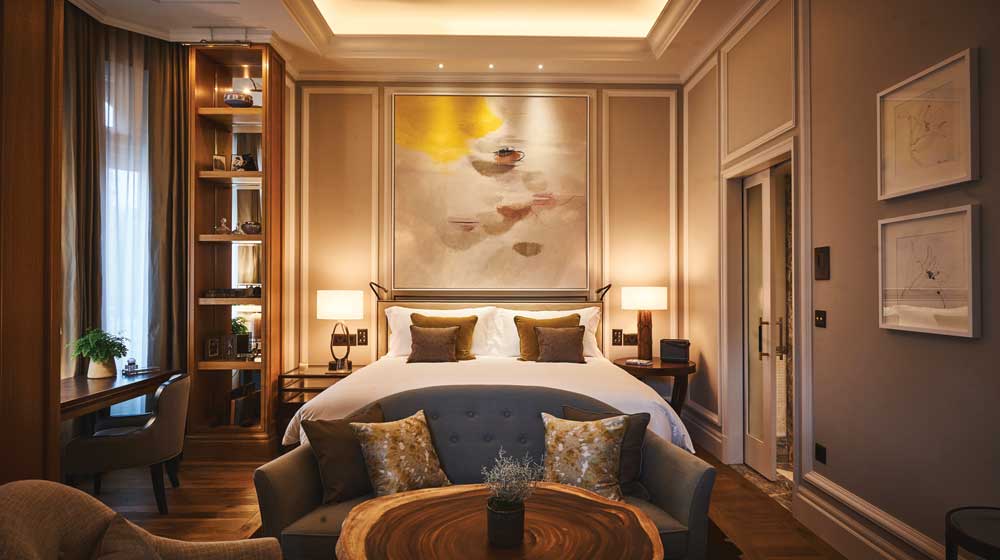 Lots of praise must also go to the hotel’s ultra-passionate GM Klaus Kabelitz. Those who know him from his time at Four Seasons and The Berkeley will attest to his attention to detail. The hotel now only has 54 rooms. A welcome card is almost a 3D popup, showing an outline of the six-floor exterior. You have Jacob Jensen phones, luxury Bamford toiletries and books to fill you in on the locale. A yoga mat can be used for sessions in Cadogan Gardens, immediately across Sloane Street; guests can also play tennis, or picnic in the Gardens. There are a slew of Knightsbridge boutiques, including Dolce & Gabbana, Hermes and Pucci, just five minutes’ walk to the left of the hotel entrance. By contrast, a five minutes’ walk to the right takes you to zingy King’s Road. 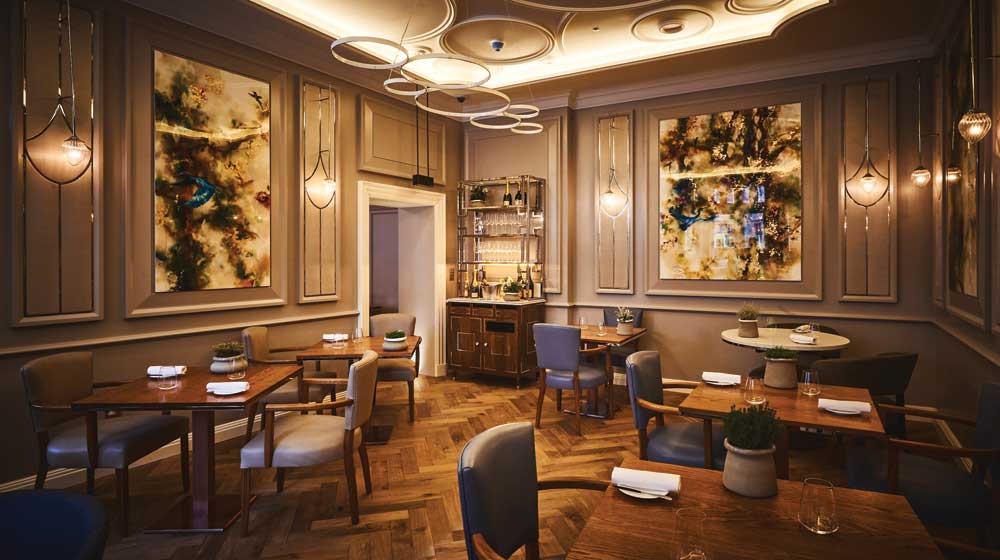 When you check in to the hotel, you are asked for your choice of newspaper and what kind of fresh milk you would like for your morning tea. In the morning, your newspaper hangs outside your door in a proper leather holster, with an extension for your bottle of milk. Indeed, the longer you stay in this hotel, the more you will realise that it is far above average. My morning teacup is nestled in a bright floral design, its dominant colour exactly matching a hand-knitted cosy on the teapot that has a professional label: ‘made by Adam’s mum’. 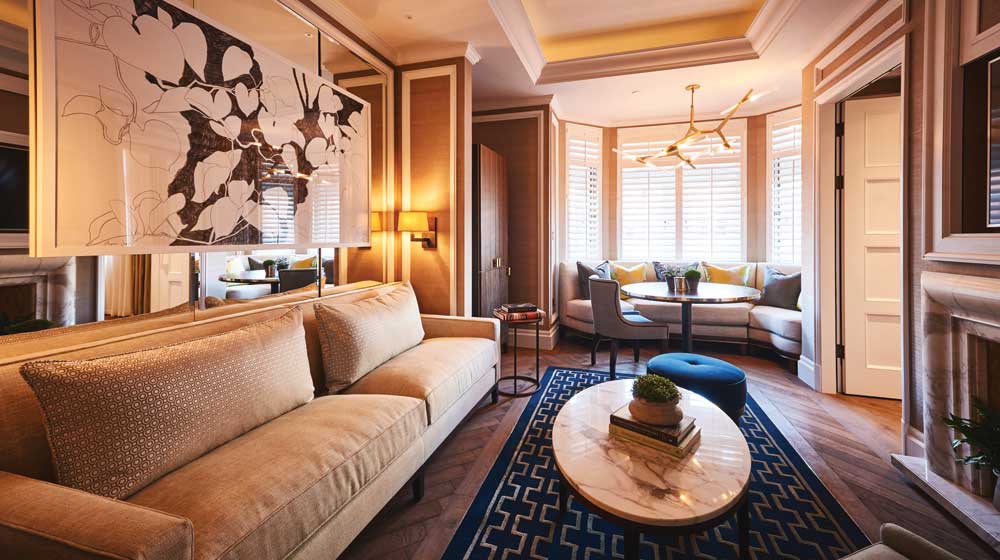 ‘Adam’ is Adam Handling, the culinary guru at this luxury hotel. He’s also a wine connoisseur of sorts, something I notice when I see his name on the label of my bottle of English sparkling wine. Adam Handling has had a hand in the design of many aspects of the hotel, including the teacups and the china which are made by William Edwards. He also oversees the hotel’s two bars, a lounge that does afternoon teas and the main restaurant. The main restaurant can be cleverly reached by walking alongside the actual kitchen (it’s worthwhile to reserve one of the three kitchen tables that look down at production where, unusually, you will be asked if you would like to help plate your main meal). My meal was truly memorable: a pair of one-bite truffle dumplings; then a celeriac-egg-apple composition; and, finally, a tranche of turbot with kohlrabi, baby shrimps and sea-herb and caviar sauce with a glass of Seresin Sun & Moon Pinot Noir Marlborough 2013. Breakfast was equally memorable. Who else presents the ‘bread basket’ as a two-tier wooden box with pastries above, butter and preserves below? 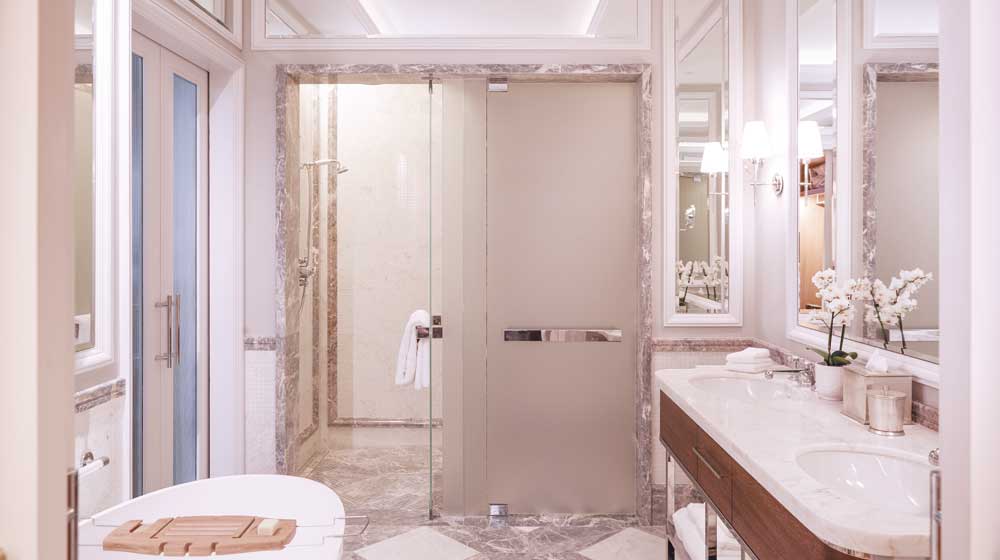 Once you’ve recovered from the flight, and shopped to retail saturation, you might want to head to Italy. Belmond already has its Caruso, Cipriani, Splendido, Splendido Mare and Villa San Michele beauties. But at the end of March it extended to Tuscany. Think 4,200 acres of rolling hills and woodland, hazy vistas that are an hour south of Florence, and you have the setting for Belmond Castello di Casole. Judging by artefacts found during recent construction – the same priceless bits of pot now displayed throughout the 39 rooms of the hilltop hotel – there have been people living on this site for millennia. Belmond bought the estate in 2018 and, with the help of designer J Banks and onsite Manager, Roberto Protezione, spent months bringing it up to scratch. This renovation involved immaculate manicuring of the immediate gardens and the addition of significant antiques like the chest shown here, which opens up as a closet. 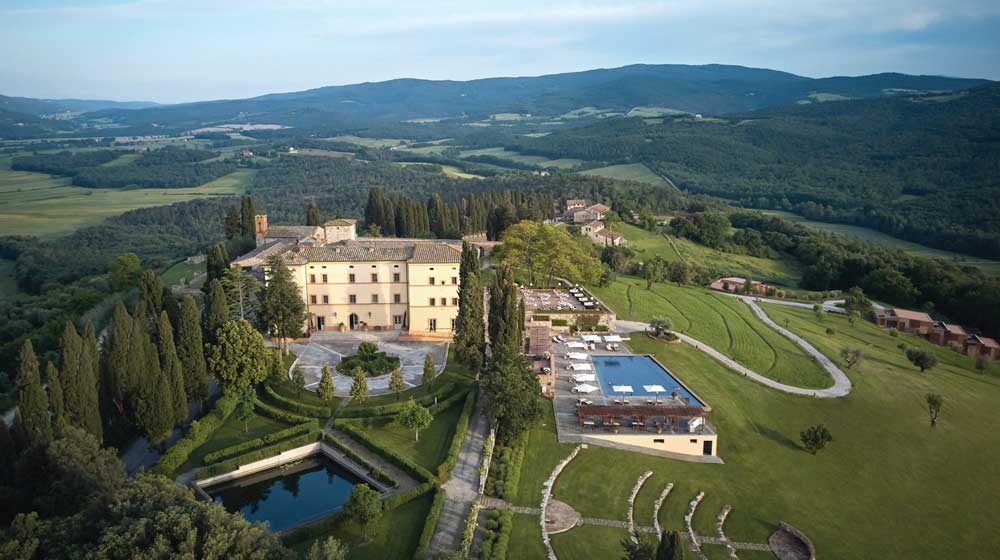 The hotel has 30 timeshare houses with another 15 that will soon be established nearby. These lucky fractional owners can use all of the hotel facilities, including a scenic outside pool permanently heated to 27°. The whole complex was put together a decade ago by Timbers from Winter Park FL, and the interiors were designed by Joni Vanderslice of J. Banks, a designer who has worked with Timbers’ founding Chairman, David Burder, in the past. 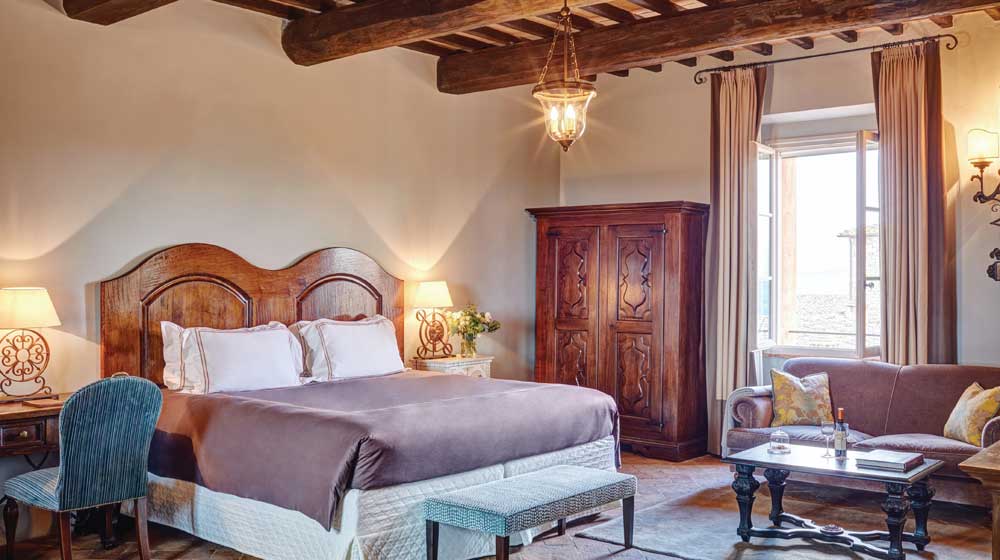 My suite was down a short pebbled street from the central three-floor ‘mansion’ in CP33 (Casa del Prete). Up 13 smooth-brick steps from the ‘street’, my home looked out onto the Tuscan landscape. I was reminded of the past and, at the same time, I had the trappings of today, including an espresso maker, electric towel rail and good WiFi. I also loved the addition of a satin pincushion with threaded needles and a box of goodies with postcards showing Maria Callas with Visconti, whose brother owned the estate. An enticing booklet suggested a range of activities, from boar hunting through to ballooning, but sadly my time was limited (next time the Essere Spa is definitely on the list). I hiked briskly down the near-diagonal approach road and watched world news on a Technogym elliptical (how nice to have a gym with a view, especially over Tuscan valleys). 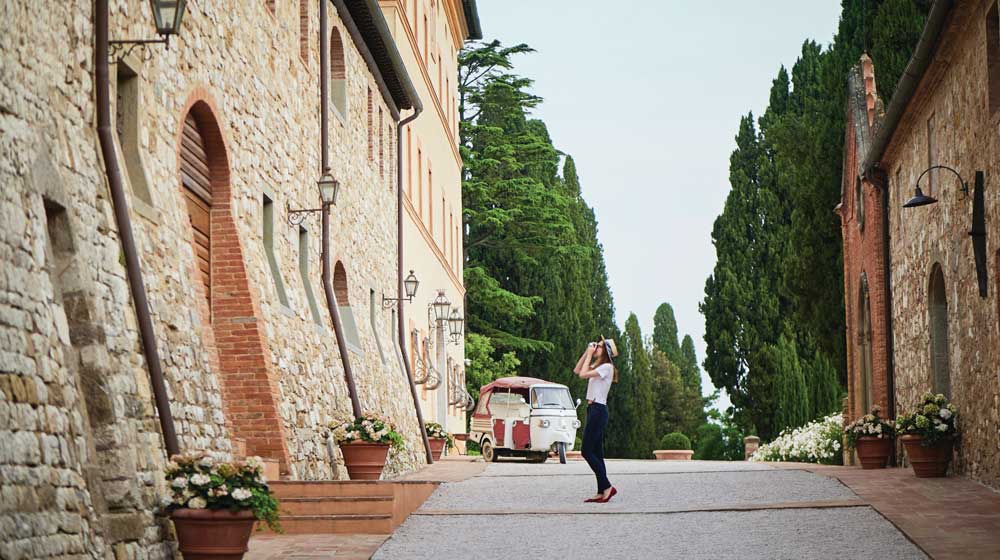 I dined with Roberto Protezione and with big-local-boss Emanuele Manfroi, who is based at Belmond Villa San Michele which he also oversees. We dined in Tosca, which to my surprise was full just six nights after the hotel opened – I envy those lucky part-owners who have Daniele Sera’s food on their doorstep. We paired the hotel’s own olive oil and wine, a 2016 Sangiovese, with our meal. I started with a tight-knit ball of al dente spaghetti lightly infused with squid ink. Pride of place went to the Bistecca alla Fiorentina, a hefty loin cut of generally Chianina beef that must be hung at least 15 days. Tonight it was presented upright, and effortlessly carved at table by a charming young lady who smiled throughout. 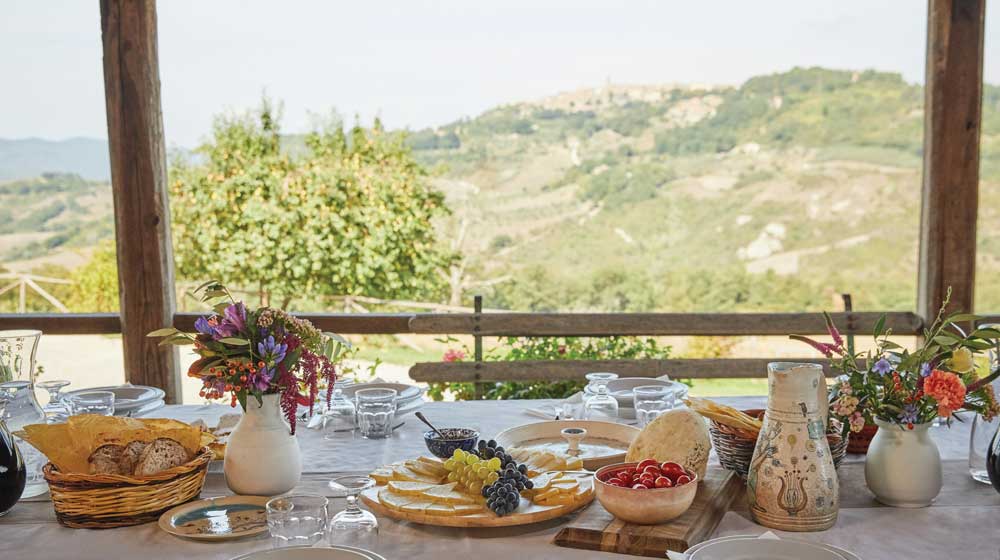 In the morning, after a good workout and a few minutes admiring the stunning array of high-fashion athleisure in the spa’s boutique, I had my usual healthy breakfast. For a change of creative environment, I used the luxury hotel’s main building’s lounge and bar as alternative work spots. Sadly, Eduoardo from Sienna was already ready with the black Jaguar to drive me one hour to Florence airport. Who knows, next time I might be chauffeured in the electrically-modified 1936-vintage Fiat 1100 Musone that Emanuele Manfroi is having decorated, inside and out, by Rome street artist Lucamaleonte. There will be a built-in cooler inside for the Veuve Clicquot. 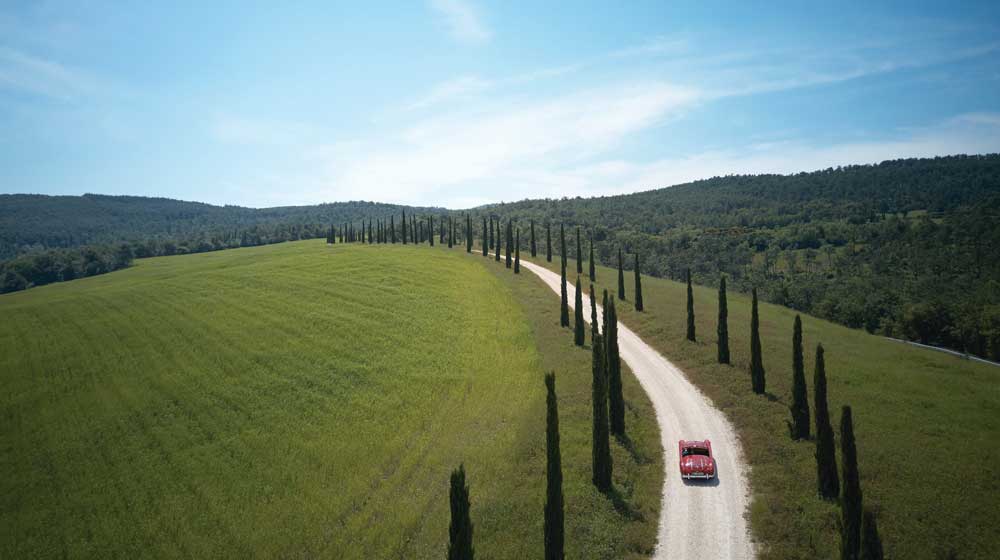