It was a joy to return to the sensual beauty of Marrakech after what seemed like far too long. I arrived by Porsche to La Mamounia: the luxury hotel only rivalled by Dubai’s Burj Al Arab in the number of tourists it receives every day. When I arrived I was met by Etienne Haro – who actually moved from Burj Al Arab – holding the fort for his boss, Pierre Jochem, who was away promoting La Mamounia to top global buyers. Although, judging by the number of Americans visiting La Mamounia today, it seems that the word has spread.  Indeed, since it first opened in 1922, the rich and famous have flocked here. Suite 300 is named for Winston Churchill, with a bust of the legendary Prime Minister as well as a 34-volume set of the 2,000-print run Library of Imperial History, published in 1974 for the centenary of his birth.

But before moving upstairs on this visit, I was welcomed in typical style with Medjool dates and almond milk. The aroma – created by Fragonard for the hotel – added to the performance of this welcome. Then it was time to see my lodging. I have stayed in several suites in this 209-room hotel, which also has three detached villas with three bedrooms apiece. I think my favourite is 180, which is up 24 stairs from the main lobby, past the spa and several top boutiques. I prefer room 180 during this visit because it is manageable and not over-stuffed. It is exquisitely detailed: the same top-grade, mid-tan finest leather has been used to cover drawer fronts and the leather forms notelet covers and bindings for room collateral. It is luxurious to have everything so exactly matched; even the yellow-leather barbouches and Berber slippers blend magnificently. A copy of three Etoiles magazine, the French culinary bible produced by Dominique Faye, has a cover photo and an inside story on Pierre Jochem and this hotel. It’s the best in the world according to Conde Nast Traveler, October 2018.

The hotel is owned by King Mohammed VI of Morocco. In 2009 it reopened after a three-year refurbishment which drew from the conventional style of the designer, Jacques Garcia. You see Garcia’s style instantly by walking to the rear of the main lobby, where the corridor to the gardens evolves from a venue for afternoon tea and then live music. This space, about 80 feet long by 15 feet wide and 20 feet high, is called Garcia Theatre, made up of maroon velvet paired with historical woodwork, a ceiling by Jacques Majorelle. By evening, the space is enlivened by a live group playing near the entrance to the garden and, to the left of the space, is the Majorelle Bar.

To the right of the Garcia Theatre is Le Français. There, on the French restaurant’s terrace, Etienne Haro and I dined in splendour. I started with a sucrine salad with tuna tartare and went on to a Charolais ribeye, carved tableside, with fabulous parmesan-dusted La Mamounia fries. We drank the hotel’s own Cuvée La Mamounia: first a 2018 blend of Chardonnay with 30% Sauvignon Blanc, then an all-Shiraz 2016. On request, top Sommelier Mickael Rodriguez, who helped blend these hotel wines, hosts tastings from his cellars.

The meal finished with a selection of Pierre Hermé macarons made with lemons from the gardens of this unique luxury hotel. The hotel sits in 17 acres of exquisitely tended grounds. There are gravel walkways flanked by fruitful olive trees, others with lines of tall palms. There are roses here, oranges and lemons there and hidden among them is the clay tennis court, the gym and the pool (the gardens are open to the public, the pool is hotel guests-only). I had breakfast poolside, outside Le Pavilion de la Piscine, which holds the splendid breakfast buffet, a cornucopia of everything you can think of. The chefs can, if they have the ingredients, rustle up what you cannot immediately see on request. Servers in royal blue jackets and white yachting shoes add yet more to the overall recipe of luxury created here.

Among the spoiled-for-choice selections of hotels in this fascinating city is Royal Mansour Marrakech. This hotel is ideal for travellers who want to combine the feeling of staying in a riad, or ryad – housing in close confinement that partly overcomes lack of ground-space by building vertically – with true luxury. Try a genuine riad in Marrakech’s Medina old quarter and it will probably be extremely noisy and potentially dark and claustrophobic. Royal Mansour, opened in July 2010 at the command of the King as part of his 2010 vision to improve tourism, burst on to the scene to show that true 21st-century luxury need not neglect tradition. I arrived in the hotel’s Rolls-Royce but the doorman was in traditional gear.

Narrow pedestrian-only streets are a feature of the Medina and here the designers, 3bis, have included narrow walkways in the spa (an amazing structure which, at ground level, has a two floor-high inner shell of white metal fretwork like a giant gazebo; the functional areas of the spa and the gym are relegated below-ground). Even the walkways between buildings are only about three feet wide, and they deliberately twist and turn, to avoid long sight lines. The buildings, terracotta-coloured, have heavy pale turquoise doors, and barely any windows. They have two high storeys that rise about two metres above the rooftop to provide absolute rooftop privacy.

All 53 suites are consequently vertical. Typically, room 43 – with a 175 square metre interior – had a small outdoor courtyard. The ground floor had a compact living room and kitchenette corner. Rise 33 interior stone stairs to the bedroom and bathroom, and a further 26 steps to the rooftop. Small windows have decorative door-type shutters. Unseen interior service ways allow employees to use elevators to access any floor and underground corridors mean buggies can be used back-of- (or under-) house. Those who need a lot of light at breakfast would probably ask for their meal to be delivered, room service, to the rooftop terrace. Alternatively, do as I did and head for the gorgeous outdoor terrace of the all-day La Table restaurant, overseen by Yannick Alleno since opening.

MD Jean-Claude Messant, who had a long career with the Hôtel Barrière group, has helped improve this hotel. I see his eye everywhere (in such details as the gold-embossed personalised stationery, in a woven leather folder in my riad, and the vertical-yoga slings that hang in a fragrant garden area outside the spa). Two years ago he added another couple of acres of garden, which gave the property a massive outdoor pool to complement the spa’s interior pool. This extra landscaping, designed, like the original, by landscaper Luis Vallejo, has also added the highly popular Le Jardin casual restaurant. It was fortunate that a lunch reservation had been made as by 12.15pm the place was full, with fashionistas of the world not exactly in tears, but certainly pleading to get in. How many luxury hotels have that problem on a daily basis? 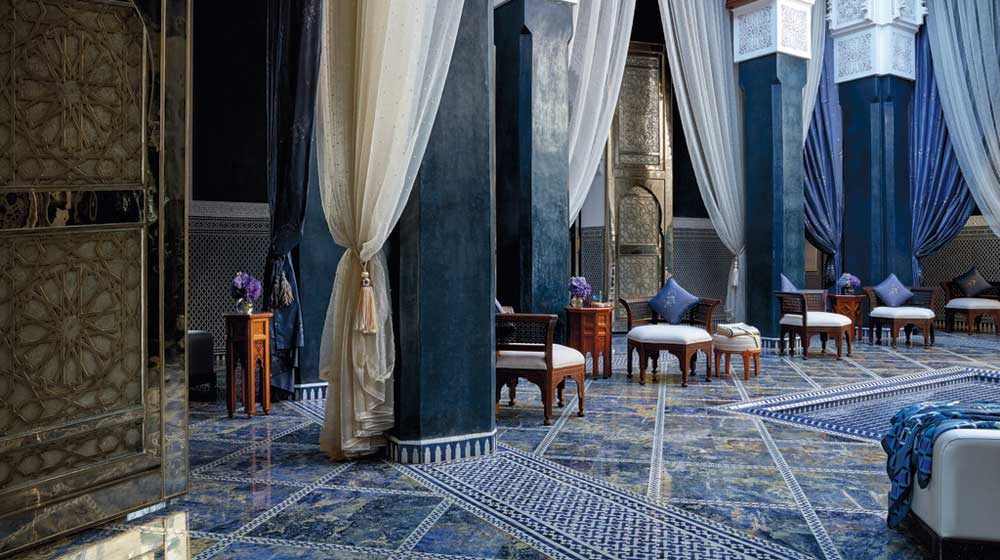 Inside the staterooms of The Haven by Norwegian

More blooms to see in Australia’s own backyard

Aug 11, 2020
Prev Next 1 of 1,593
Tweets by LATTEluxurynews
Subscribe to the LATTE enews
Enquiries