Mary Gostelow has a weekend of a lifetime in Tasmania

Well, I knew I was in for a treat at Saffire Freycinet but I did not realise it was ‘wow’ from the moment of arrival. Although it can only be properly seen from above, the main block is shaped like a giant stingray, with 20 detached villas beyond its head. These villas all face across Oyster Bay to a promontory with a skyline of the five Hazard mountains, the tallest of which, in the middle, is the 485-metre-high Mount Dove. How did this resort, which opened 2010, come about? I am told that the Farrell family’s Federal Group wanted to extend their Tasmania gaming monopoly and to achieve this they had to build a resort. Fortunately, they happened to have a caravan park in Freycinet National Park that they were prepared to sacrifice. 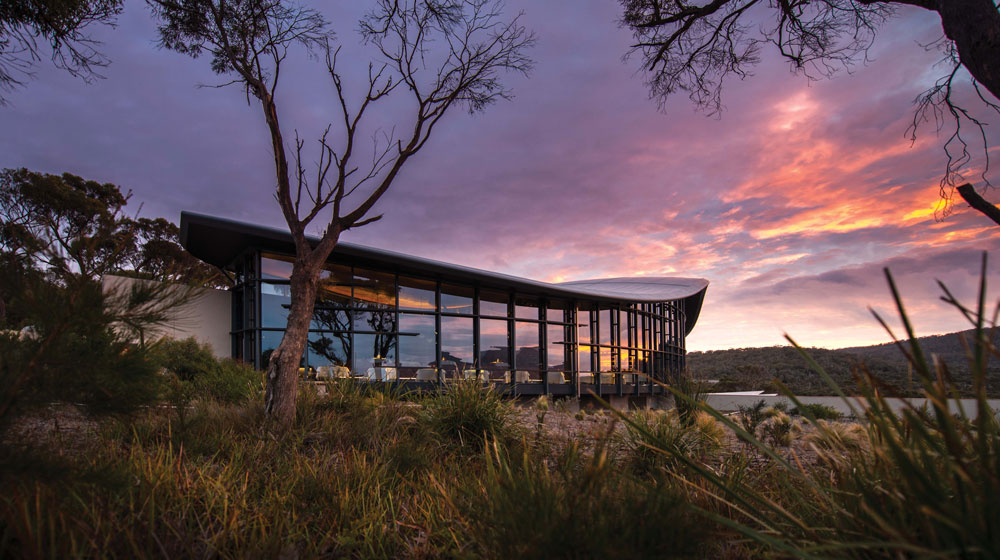 The original idea was for a 120-room lower-level operation, but eventually, the Farrells chose architect Robert Morris Nunn’s plan, apparently sketched out on the back of an envelope. His villas, all 20 of them, are more or less similar, each like a giant 80-square-metre, or slightly larger, sculpture. I was in #08, named Devonian, which had simple concrete or wood walls and one all-glass wall; all the better for that view across the bay. I just wish I had had more time to spend in it. Like most arrivals, I was met at Hobart Airport and, after coffee and a tidy-up in the resort’s dedicated arrivals lounge, I was taken along the 2.5-hour scenic route to the resort by one of its four Hobart-based drivers. 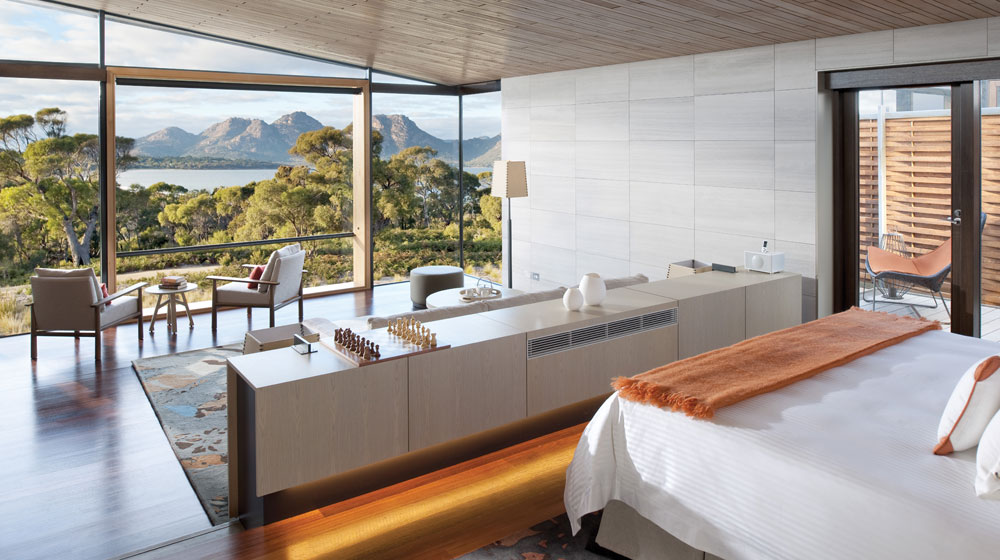 Saffire Freycinet is all-inclusive, in the Regent Seven Seas Cruises sense, inclusive of all the best. The food is fabulous. I loved the big bowls of Neil Perry-type healthy salads on the lunch buffet (my water came in a Riedel tumbler, but if I joined others in a midday wine-tasting it would have been in Plumm stemware). At dinner, my Pacific oysters were paired with 2017 Wineglass Bay Sauvignon Blanc from Tasmania’s east coast. At breakfast, I was offered the choice of Saffire muesli or porridge before tucking into the highly popular breakfast bowl: haloumi, sweet potato hummus, beetroot relish, avocado, poached egg, sesame dukkha and linseed sourdough. The GM, Ross Boobyer, says that the cuisine offered on-site is one of the many reasons people return again and again. 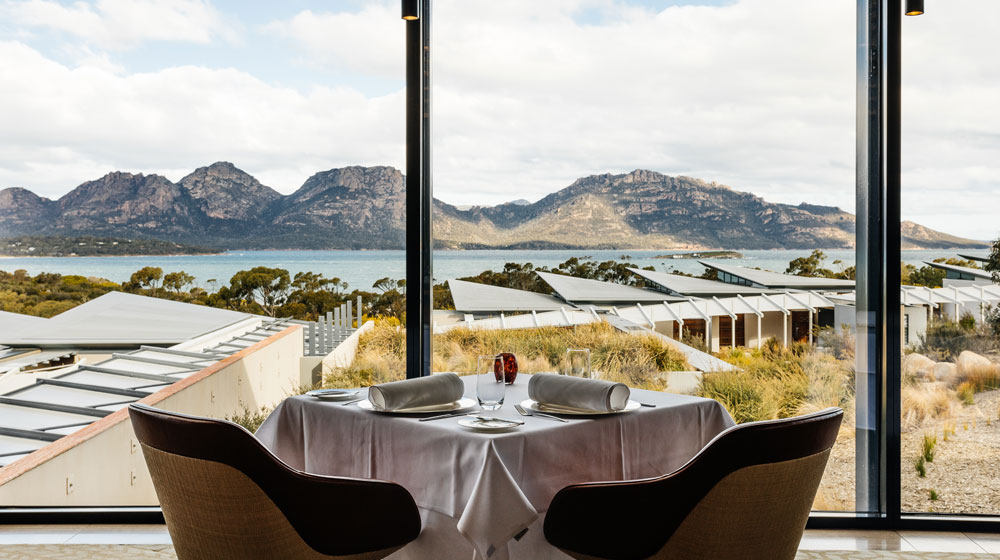 Another addictive draw are the 14 complimentary activities, top of the list being the oyster experience. Ten of us were loaned hotel weatherproof jackets and torso-covering rubber waders. And wade we did, through the shallows to see and learn about baby oysters, pea-sized, growing in wire mesh dormitories held permanently in and above the water. And then we waded some more, to a firmly planted table that Bianca, one of our minders, had set with white linen and Plumm glasses. She scooped dozens of mature oysters from an older-mollusc dormitory, shucked them and we ate and drank a local white until we were fit to burst. And then it was back to the resort to watch the sunset. In the morning, I started with a pre-dawn workout in the 24/7 Technogym, skirting a wallaby as I made my way home. After breakfast I took a Giant mountain bike and pedalled down to and along the beach, breathing in the fresh air. Yes, Saffire Freycinet more than warrants world-class status.

Back in Hobart, I experienced another of Tasmania’s extraordinary hostelries: The Henry Jones Art Hotel. The hotel is another feather in the cap for Federal Group, which also has a new-build MACq 01 hotel opposite. The Henry Jones, as its name implies, is filled with art; 400-plus pieces in all. It was difficult to have a favourite, but I did rather treasure Woods by David Keeling, one of the winners of the annual John Glover Prize for aspiring Tasmanian artists (there are many original John Glovers around the hotel, too). 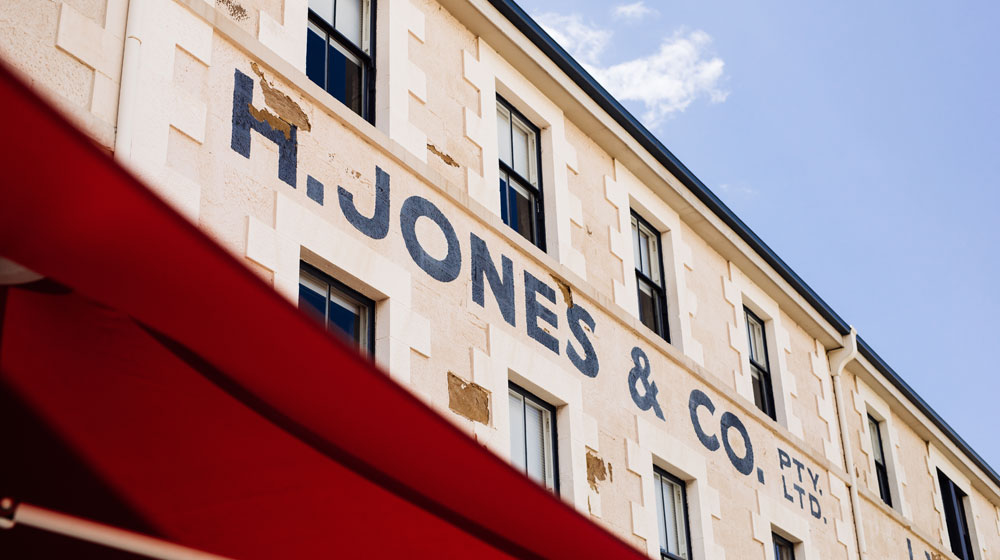 Complementing the art is the building itself, a conversion of the jam factory started in 1869 by George Peacock. He later sold the operation to Henry Jones, who began his own career at the age of 12 by sticking labels on jam tins. Jones worked his way up and made Henry Jones IXL Jams into a global phenomenon. The Federal Group bought the dilapidated three-floor buildings, structured in a C-formation around a central courtyard, which has now been glassed over to create an expansive conservatory. In the main arrival lobby, there are two artworks, specially commissioned and completed with kids’ crayons; one shows a basket for holding jam fruits, the other an urn used in the preserve-making process. 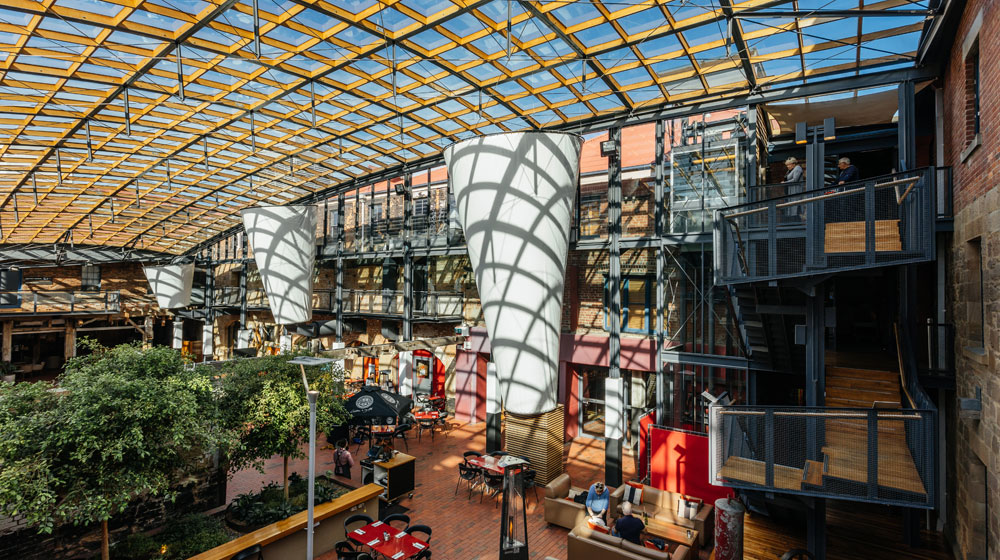 Along one long side of the building, looking straight over Hobart’s Victoria Harbour, there are a total of 56 rooms. I was in #212, a front-facing attic; some of the walls were bare stone, dating back to the beginning of the factory. Half my ceiling was corrugated iron, the rest wood. All the public areas are recycled and/or retro. There are bits of old wall deliberately left in what is now the conservatory. Centuries-old stone bits coexist with a working herb garden and seating that can be moved around as needed. Around the periphery of the conservatory space are galleries selling Aboriginal art and other works and a popular IXL Long Bar, tended by a renowned mixologist. 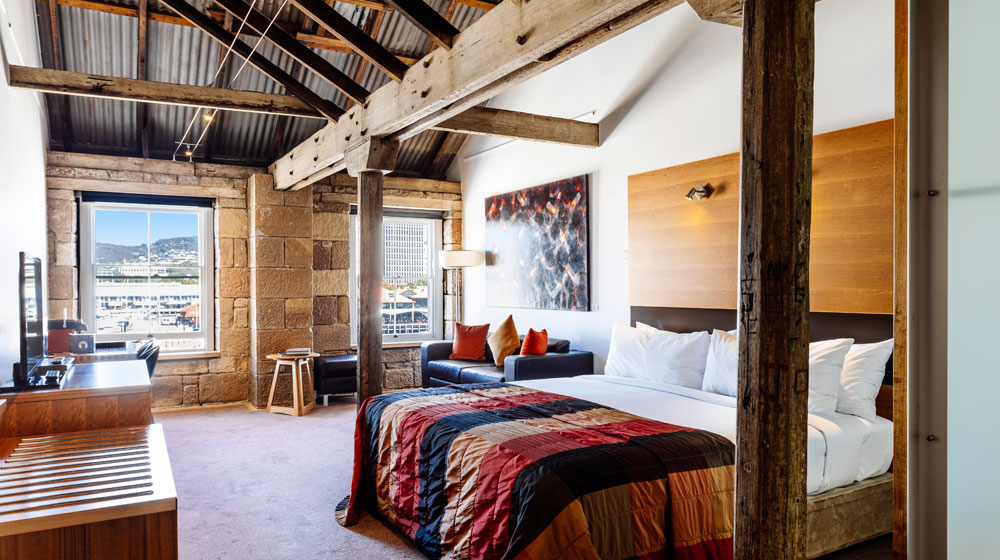 And at one end of the unusual conservatory is Peacock & Jones, the restaurant named for the factory’s two owners. This is a lovely restaurant that gives this fascinating hotel its reputation for luxury. There are extra-high tables, normal-height tables and low coffee tables, all with suitable seating. A ceiling-hung modern wrought-iron sculpture holds a working fire. The customers are locals, anniversary couples and groups of girlfriends, all having a good time. I was brought an amuse-bouche: a one-bite choux pastry topped with truffle. I had a local burrata with beetroot and currants, and then – the highlight – grilled wallaby that was probably from a Flinders Island farm. It was soft as veal, but more flavourful and it went marvellously with Brinktop Killara 2017 Pinot Noir. 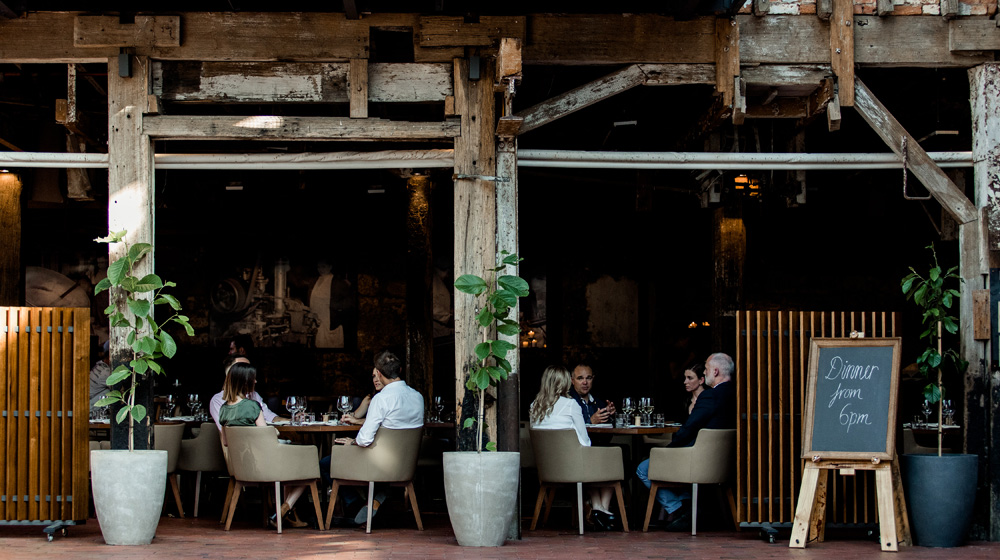 In the morning, I went for an early walk around Victoria Harbour, taking note of a memorable life-sized statue of walking women: Footsteps 2017 by Dubliner Rowan Gillespie, which commemorates the 13,000 convict women who were brought to Tasmania in the early 19th century. And then there was just time for divine yoghurt and an omelette in the MACq 01 hotel, cantilevered over the harbour. 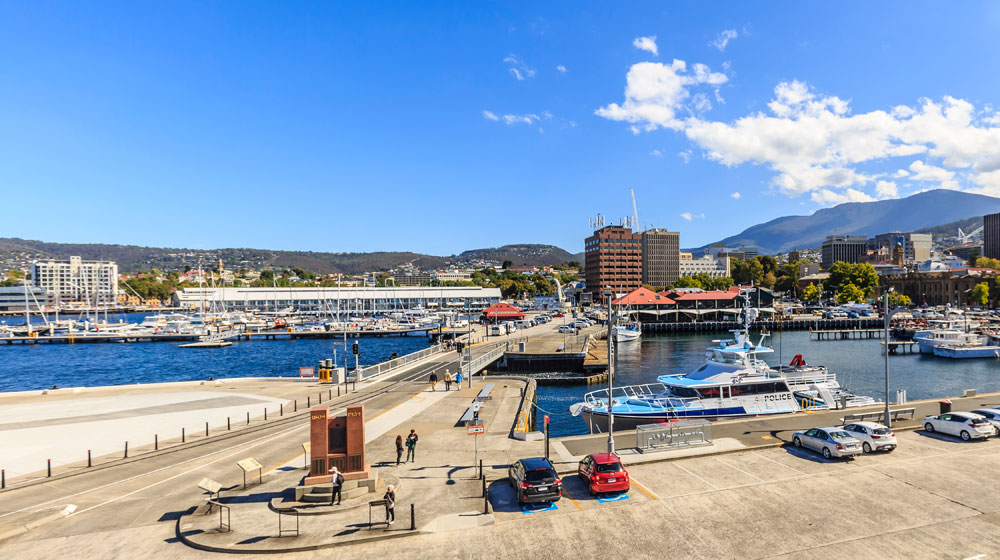 Being a Sunday, I felt more than justified in taking up Tourism Australia’s kind offer to see something else of southeast Tasmania. A driver from Par-Avion, the transport firm, drove me to Pooley Wines, a third-generation winery in Richmond. This is a company that has a clever marketing approach; sign up to its club for free and you immediately get 15% off any wines, say the Cooinda Vale Cabernet Merlot (50-50) 2017. Thereafter, guests received the same concession on any case – your choice of labels – four times a year.

Next, a four-passenger Par-Avion R44 Clipper II chopper, with pilot Dave, landed next to Pooley Wines’ carpark and we took off to Frogmore Creek Winery in Cambridge. This fabulous estate is co-owned by an American, Jack Kidwiler, and Tony Scherer, Tasmania’s Senior Australian of the Year, 2018 for the organic farming he has been promoting since 1990 (he is President of Australia’s Pinot Noir Forum).

Of course, it is rude to arrive at a vineyard and not say yes to a tasting. Frogmore Creek probably had over a hundred already having lunch, but first I was led through some excellent Rieslings by a charming Beijing architect, Stan, who had given all that up to follow his passion (I am never going back, he said firmly as he poured the 2017 Frogmore Creek Riesling that garnered Silver in the 2018 Riesling challenge). And then I sat down, looking at vineyards through all-wall windows. Both my dishes were exquisite. First I had a beetroot-cured salmon belly with mulled apple gel, baby beetroot and tzatziki yoghurt. This was followed by a sweet potato, pumpkin and baby spinach frittata with spiced pumpkin curd, mandarin gel, pickled butternut, pistachio dukkha and pumpkin. Its recommended wine pairing was 42 Degrees South 2018 Rosé. 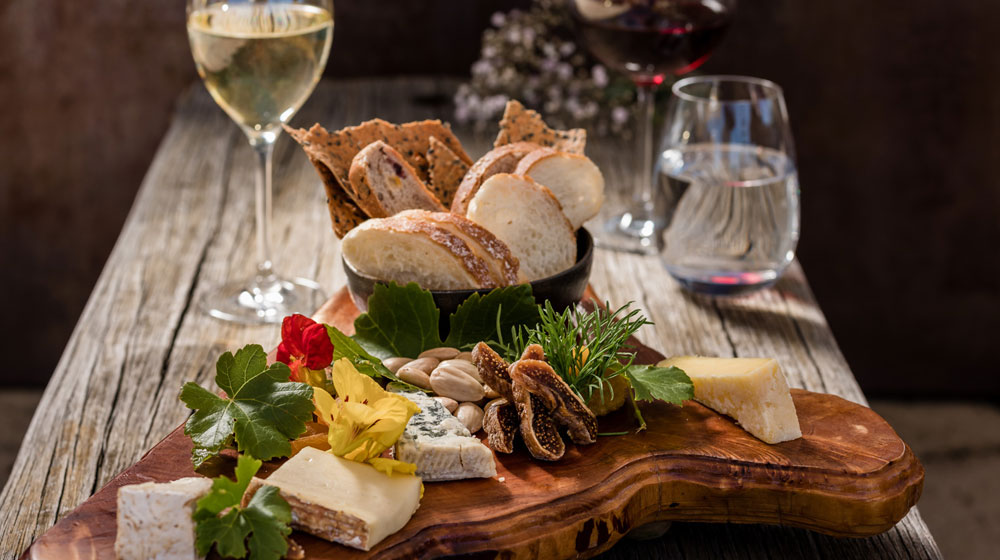 I was getting addicted to being chauffeured around by Dave. Similar to the Napa Valley, an increasing number of winery tourists use Uber to avoid having to drink and drive when hopping from one wine house to another. Here, travelling by Par-Avion makes a lot of sense (I would also recommend anyone short of time to use them to get quickly to and from Saffire Freycinet). On my day, however, Dave stayed nearer to Hobart. His last stop was to Shene Estate & Distillery, a stately home stone concept built in 1856 in English mansion style, though I have yet to come across any notable Cotswolds-type buildings where solid stone walls are paired with corrugated iron roofs. My host here was Queenslander Anne Kernke, who bought the ruined mansion with her husband David, and they are, between them, on a lifetime’s conservation mission to create a living heritage that is also viable.

Frankly, Anne Kernke is such a bubbly enthusiast she could sell Shene Estate as an event space to anyone, a wedding planner or a car company (the main double-height barn now has Murano-type working chandeliers). She is the main tour guide and also the business developer for the distillery that husband, David, manages and oversees. Their Poltergeist gin is dedicated to Gamaliel Butler, who built Shene in 1856 and then went on to give his wife 16 babies. There are also tastings of Mackey whisky, named for the Kernke’s former business partner, Damien Mackey. Samplings are held at the bar at one end of Shene’s main hall. I was only sorry not to stick around for some of Tasmania’s connoisseur events, especially the upcoming Tamar Valley taster happening from 24 to 26 May 2019. But Girlahead was off, yet again.

Changing of the guard for Switzerland Tourism

Jan 22, 2020
Prev Next 1 of 1,464
Tweets by LATTEluxurynews
Subscribe to the LATTE enews
Enquiries