Qantas Group Chief Executive Officer, Alan Joyce, said: “Both airlines submitted a compelling proposal to the DOT that would bring significant benefits to millions of travellers and a boost to tourism.

“For more than 30 years, Qantas and American have connected the US and Australia as partners. This joint business means that we’ll be able to deepen this partnership to offer new routes, better flight connections and more frequent flyer benefits,” Joyce said.

A final decision from the US Department of Transportation is expected in the coming weeks.

[06:15am 4 June, 2019 Sydney]
An expanded alliance between Qantas and American Airlines has been given tentative approval by the Trump Administration following 16-months of deliberation.

Subject to specific conditions, the deeper cooperation spans a metal-neutral joint venture agreement between Australia & New Zealand and the USA, which must be implemented before the end of the year.

The US Department of Transportation (DOT) said its analysis of the aviation venture found “substantial public benefits” would likely result from the proposed cooperation by granting antitrust immunity to the oneworld partners. Among the benefits flagged by Qantas and American are up to three new routes within the first two years of immunity, and ramped up capacity on existing routes.

Non-stop flights from Brisbane to Chicago are an almost certainty, with LATTE last year reporting on detailed plans submitted by the airlines to the US Government highlighting the extensive benefits of operating to the “Windy City” (see below). Seattle is another destination that has been previously flagged by Qantas Group CEO Alan Joyce. Both routes would likely be operated by incoming Qantas Boeing 787-9 Dreamliner aircraft.

In its draft determination announced today [4 June, 2019], the transport regulator said QF and AA’s initial proposal four years ago had ultimately failed to provide sufficient evidence of their ability to execute their proposed capacity plan. As a result, Qantas and American Airlines withdrew that request, before resubmitting an application at the end of February last year.

“A significant period of time has passed between the Department’s review of the 2015 proposal and its tentative decision here. The Joint Applicants stress that circumstances have changed in the U.S.-Australasia market, and that they have adapted their joint venture plans to enhance competition and provide more valuable benefits for the consumer compared to their last application. They have produced a large volume of specific evidence in both their application and their response to the Department’s evidence request.”

The DOT cited three “relevant facts and circumstances” that now supported the alliance’s approval: 1) market conditions have evolved since 2016 to mitigate competitive harm; 2) changes to the structure of the Joint Venture to account for the ultra-long-haul market; and 3) supportive evidence of new technology to stimulate traffic in markets behind US gateway cities.

Conditions of the alliance include a self-assessment review in seven years time, providing adequate time for the airlines to have implemented their joint venture.

The US transport regulator noted that US-Australia country pairing has experienced both passenger growth and seat count growth since the Department’s last evaluation. There has also been increased participation from most carriers flying nonstop in the market.

“While still commanding a large share, Qantas and American’s overall relative share of traffic has grown modestly, while each of their relative shares of seats has shrunk, indicating that the Joint Applicants must compete with the new capacity that all carriers are adding to the market. 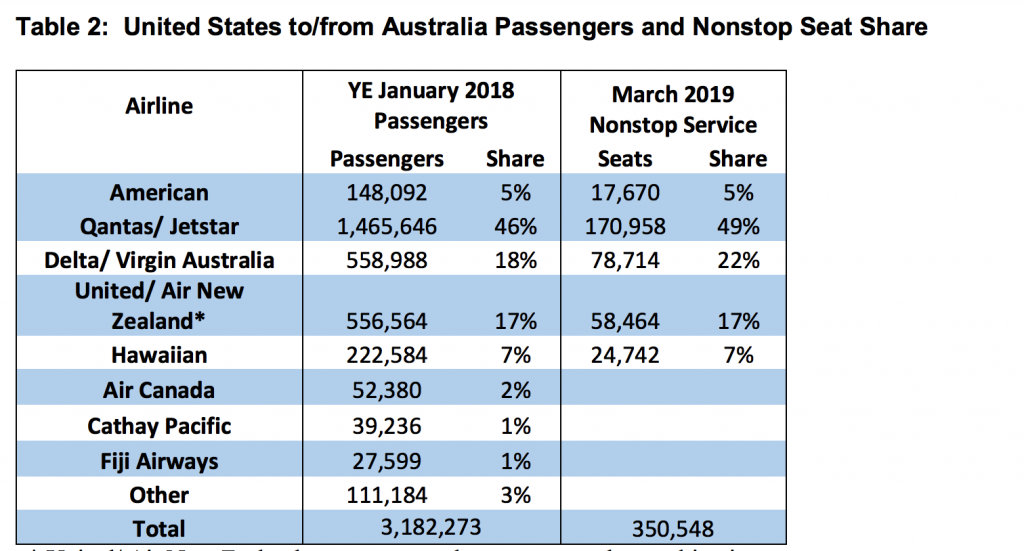 Even though the planned alliance would boost overall market share for Qantas and American Airlines, other carriers such as Air New Zealand, Air Canada, Cathay Pacific, Fiji Airways and others raised their share of the overall U.S.–Australia market. At the same time, the total number of passengers jumped 16%.

“The Joint Applicants have seen their share of nonstop capacity reduced by 5%, from 59% to 54%, while other carriers operating nonstop service from the U.S. to Australia, such as United and Virgin Australia, have grown their seats in the market. Demand and capacity are growing, and the market is competitive,” the DOT said.

Aug 5, 2020
Prev Next 1 of 1,589
Tweets by LATTEluxurynews
Subscribe to the LATTE enews
Enquiries

Qantas given final approval for expanded alliance with…

ATI denial for Qantas/American Airlines will be…