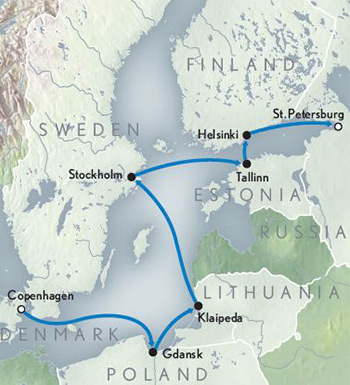 As with all A&K luxury expedition cruises, guests sail with the company’s award-winning Expedition Team and engage with an enrichment program tailored by experts in their respective fields, revealing the destinations visited in depth and with singular insight.

A&K’s innovative Design Your Day concept is also a feature, giving guests greater choice and the ability to personalise certain days of their journey. In Gdansk, Poland, travellers can choose between a guided walking tour through the Old Town, a reflective WWII immersion at the Museum of the Second World War and a former concentration camp or a fascinating insight to the Polish Solidarity Movement of the 1980s, visiting the Solidarity Centre where the famous August Agreements were signed.

In the Finnish capital, Helsinki, Design Your Day choices include a privately guided boat trip and visit to the 18th century Fortress of Suomenlinna, a cultural treasure and World Heritage Site, or a traditional Finnish sauna experience and nature walk.

Other options include a rooftop walk and art tour in Stockholm, a visit to a former Soviet nuclear missile base in Lithuania, an Estonian vodka tasting event, a Russian cooking class in St Petersburg and a Nordic cuisine sampler with local providores.

Along the way, travellers are invited to participate in enriching discussions with guest speakers that include Nobel Peace Prize recipient and former president of Poland Lech Walesa, as well as writer and former interpreter to USSR president Mikhail Gorbachev, Pavel Palazhchenko.

The all-inclusive Cruising the Baltic Sea journey comprises nine nights aboard the ship plus three nights to cap off the voyage at the Four Seasons Hotel Lion Palace St. Petersburg.

Cruising the Baltic Sea: Copenhagen to St. Petersburg
Journey dates: 16 – 28 July, 2020
Special Offer: Save $2,900 per person on all stateroom categories*

*Special Offer is subject to availability and may be withdrawn at any time.
Passenger numbers are capped at 148.

What you need to know about Heritage Line’s Anouvong

Mary Gostelow stays down by the river in Bangkok