Mirazur has been awarded the top spot at The World’s 50 Best Restaurants 2019 awards, announced in Singapore this week. Located in Menton, France, Mirazur is lead by Chef Mauro Colagreco who has a love of local produce, most of which is grown in the restaurant’s three-tiered garden located just metres from the dining room.

Mirazur climbed two places from its position in 2018, rising above Osteria Francescana. Colagreco’s Mirazur is joined in the top three positions by Noma (No.2) in Copenhagen, Denmark, and Asador Etxebarri (No.3), in Atxondo, Spain.

This year’s event saw 26 countries across five continents honoured with a place on the list. Spain had seven eateries in the list, including three in the top 10: Asador Etxebarri (No.3), Mugaritz (No.7) and Disfrutar (No.9). The USA had six restaurants in the top 50. Denmark had five in the full list; Lima had two in the Top 10: Central (No.6) and Maido (No.10). Mexico, the UK, Italy, Japan, China, Thailand and Russia are also each represented with two restaurants on the list. 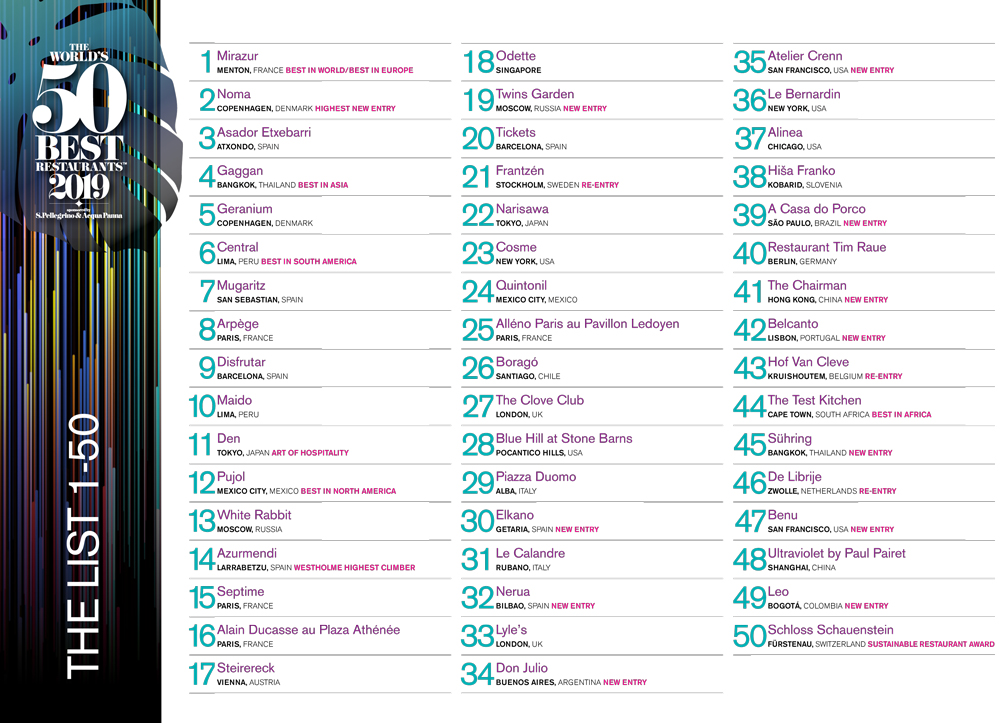 “This has been a wonderful, progressive year for the list as a whole, with so many new entries from all corners of the globe,” said William Drew, Director of Content for The World’s 50 Best Restaurants.

“We are equally delighted to welcome the seven previous No.1 restaurants into the newly created Best of the Best category.”

Best of the Best

Those in the elite group of No.1 ranked restaurants (listed below) will now be forever honoured as iconic dining destinations in the Best of the Best hall of fame. The chefs and restaurateurs who have led their restaurants to the pinnacle of the list have expressed their desire to invest in the future of the sector and ‘give back’ to the food world through new projects and initiatives. The following restaurants have been named No.1 in The World’s 50 Best Restaurants since the list’s inception and were therefore not eligible for voting in 2019 or beyond:

Sea trials next for Ocean Victory

Jan 22, 2021
Prev Next 1 of 1,680
Tweets by LATTEluxurynews
Subscribe to the LATTE enews
Enquiries