Hotel Vier Jahreszeiten Kempinski is an important part of Munich’s history. It was built by King Maximilian II in 1858 as his personal guesthouse on the main thoroughfare that is also named in his honour. Over the years it has attracted the rich and the famous: the Clintons are reputed to have been there for the last Oktoberfest, with a brigade of security, of course. During the annual ‘beer-drinking’ season, guests will find the rates for any of the hotel’s 305 rooms doubled. In light of this increase, guests are invited to join the local elite in the hotel for a civilised cocktail on the first Sunday of Oktoberfest. Even after Oktoberfest, a sense of place permeates the property, with corridors and some walls sporting ceiling-high blow-ups of local sights. 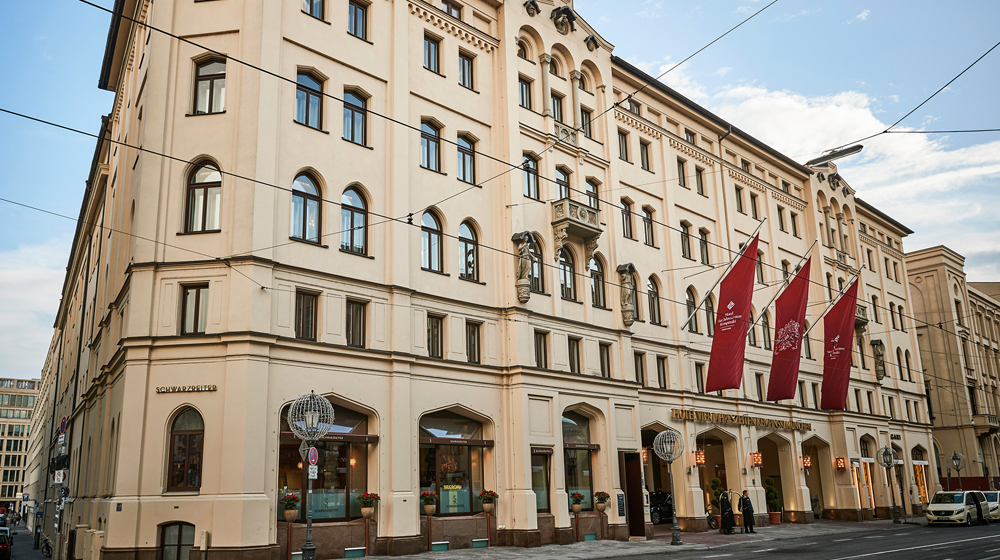 Throughout summer, the outdoor terrace located in the fifth-floor’s wellness area is a popular gathering place. All year round, fitness enthusiasts use the hotel’s indoor pool, gym and the saunas (being Germany, you can choose clothes on or not).

Special things here include a well-stocked cigar store down on the ground floor and an adjacent smoking lounge, with Airkel. This lounge employs an innovative system from Switzerland. Thousands of pinpricks in the wooden floor and powerful air suction and filtering mean that air is drawn down through the floor and purified. Now pristine, the air re-enters the lounge through the ceiling. Honestly, even with my acute sensitivity to smoke, I could not detect anything. This system should be compulsory in cigar lounges everywhere.

I arrived in Munich fairly late and fairly hungry. This gave me a great opportunity to dine local, so to speak. My order of six Nuremberg wurst sausages, sauerkraut and mash was served in 25 minutes (yes, six sausages!). In England, three would be my norm, but of all Germany’s 1,500 sausage varieties, the Nuremberg must be among the most dainty. Made of 30% beef and 70% pork belly, each sausage must be no longer than 9cm and weigh no more than 25 grams. Now for the sauerkraut. A dish I normally avoid, here I was compelled to order it as a duty and thank goodness I did; it was so delicious I ate the entire serving. Later, while researching, I learned that this fermented raw cabbage is a high source of vitamins C and K and that, during the American Civil War, eating sauerkraut was thought to have reduced the death rate. Today, there are theories that it could be an anti-cancer food.

Now, in summer, this luxury hotel is a base for medical tourists and others attracted by the city’s magnificent historical centre (Marienplatz and the Neues Rathaus are under 10 minutes’ walk in one direction, as is the English Garden, in the other direction). And do not forget retail; Maximilianstrasse is flush with brands. If you simply look across from the main door you’ll see, from your left: YSL, Hermès, Cartier, Chanel and Dior. For those who are, or aspire to be, a member of the elite, this lovely hotel, run by Holger Scroth, is your place.

I would, however, suggest one addition to the attractions above. Try to reserve two hours to visit Surfwelle, a sensational non-stop surfing display on artificially induced waves on the Eisbach at Prinzregentenstrasse, 18 minutes’ drive south of the hotel. It is also important to note that Munich is one of only four enlightened German cities that allow Uber, the others being Berlin, Düsseldorf and Frankfurt.

As an alternative to city-centre attractions and historical tradition, Munich opened its first new luxury hotel in 11 years on 25 February 2019. Andaz Munich Schwabinger Tor is a 274-room property that is part of a new community, the village of Schwabinger Tor conceived and overseen by realtor Maximilian Hurler and his family. There are four separate blocks, two – joined by a fifth-floor air bridge – for the hotel, one for offices and one that holds 150 apartments (for rent, rather than sale, to ensure the Hurlers retain control of them). In between the buildings are roads for pedestrians, for cycling, running and walking and for farmers’ markets to offer their wares. 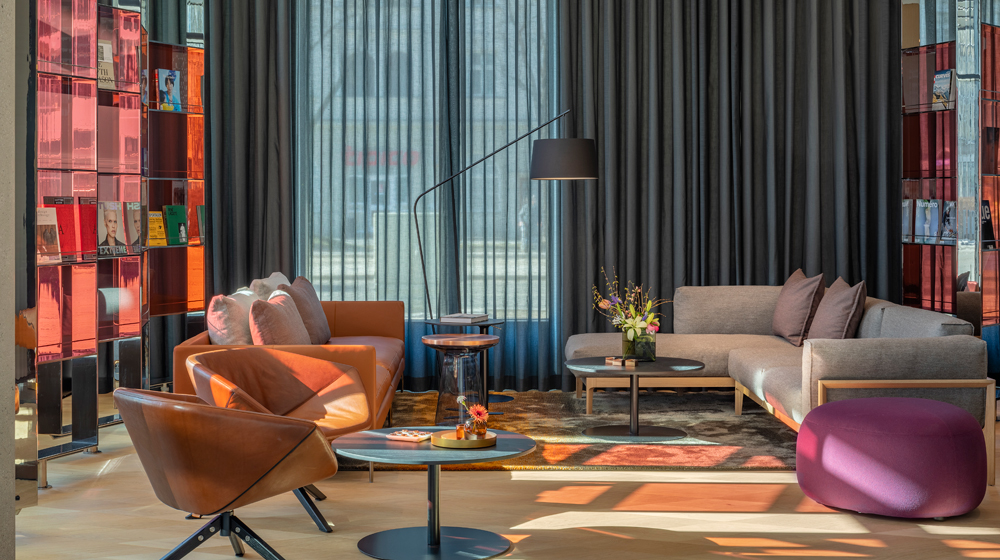 It is all very clever. The hotel’s interiors, by the Dutch firm, Concrete, feature an open atrium with coloured lucite restraining walls. Bedrooms have been magnificently fitted out by GM Mattheos Georgiou and his team and feature everything the intelligent global traveller might need. I had copies of Forbes (German) and Monocle (English), four self-diagnosis books from The School of Life and a box of quiz cards from Ridley’s Games Room, Brain Freeze quiz. 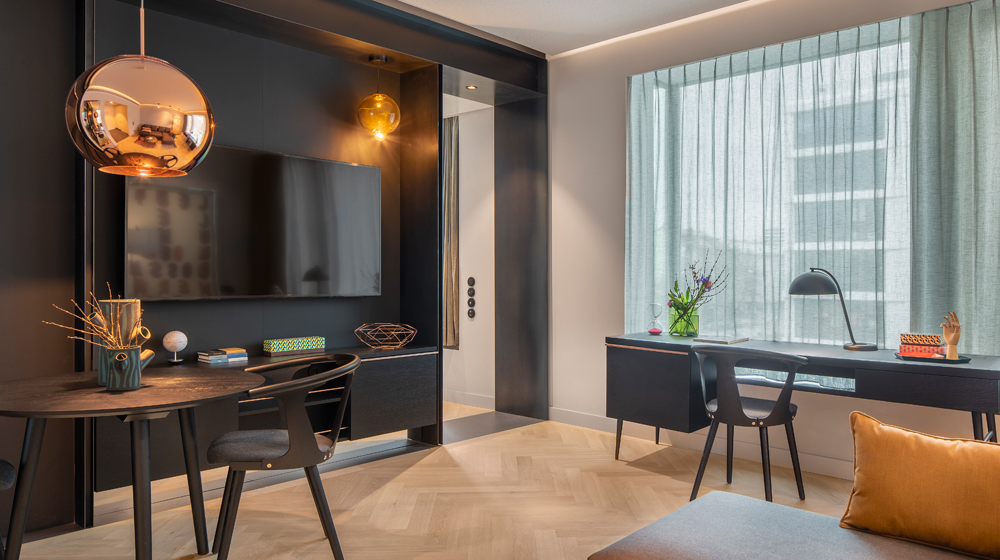 This is a hotel that has two superbly memorable highlights. One is the 13th-floor rooftop bar, M’Uniqo, which moves down 37 steps to the double-height 12th floor to offer indoor socialising to those who prefer it. Rooftop minders start controlling elevator access, down on the ground floor, a couple of minutes before M’Uniqo’s 5 p.m. start, seven days a week. Groups come and go, from post-work through to cocktails, drinks-and-tapas and on to post-prandial socialisers and the midnight crowd. I joined nearly 200 others watching the sunset; I had a Villa Massa Limoncello with Belvedere vodka, which I called Bastian after my date, Bastian Baumann, the hotel’s head of sales and marketing. M’Uniqo is a marketing magnet – at least 20% of hotel guests come up here, he said – and the rooftop experience definitely attracts business, especially at weekends. 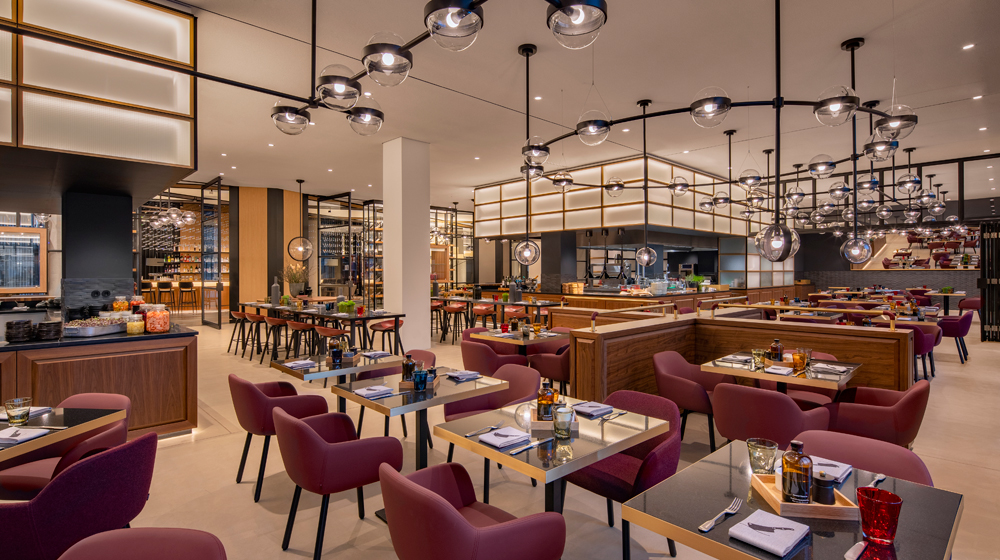 The other highlight at Andaz Munich Schwabinger Tor is the ground-floor Lonely Broccoli restaurant. Why the name? Well, this is a modern meat emporium and vegetables might feel ignored. We entered through a glass wall holding over 100 different butchery cleavers, each jammed into a woodblock. We went past the open kitchen and through the indoor space out to a pedestrian road where we sat at an unadorned wood table watching evening strollers. Dinner was sensational: a German Pinot Noir, Josten & Klein 2015 Glanzstück from just south of Bonn, addictive broccoli-flavoured cream cheese to go with homemade sourdough, burrata with fennel and orange and a perfect rib eye (my knife was a hefty wood-handled Hepp). And in the morning, after a good work-out in the 24/7 airy Technogym, I was back at TLB (The Lonely Broccoli). Its buffet is healthy, with an avocado smoothie on offer, but with calorific alternatives that include a Farmer’s Breakfast, eggs, Bavarian sausage, roast potatoes, green beans and a make-your-own nut paste machine. Dairy gourmets will need to check out the restaurant’s delectable range of butters.

After breakfast, it was time to go. My Uber arrived in two minutes and a charming English-speaking Kurd drove me to the airport in his Mercedes. 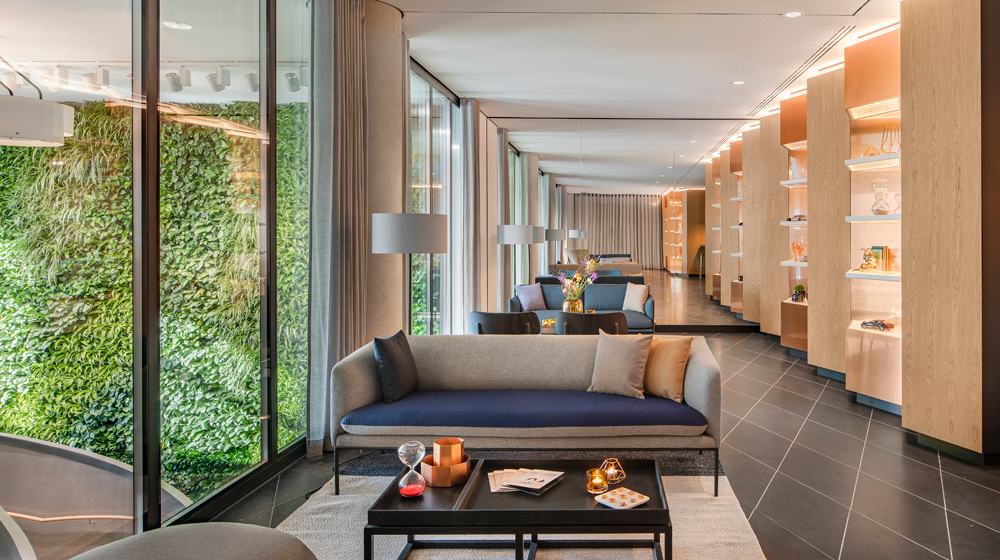 Enjoy a complimentary night at Kauri Cliffs or Cape Kidnappers

Mary Gostelow gets a taste of Australia in England