Belmond Mount Nelson is the iconic luxury hotel not only of Cape Town and South Africa, but of the southern part of the continent. It is also, together with The Beverly Hills Hotel far away in Los Angeles, one of the world’s most recognisable ‘pink hotels’ – this one was painted pink at the end of World War I and the colour still remains. And when it comes to afternoon teas, this luxury hotel is as classic as its sibling, Belmond Reid’s Palace, on Madeira.

Afternoon tea at Belmond Mount Nelson is available from 9.30am on and it is served in the lobby lounge, the adjacent conservatory and out on the terrace. There is a pink-hued menu with lots of offerings for guests, such as a Gongfu tea tasting ceremony with tea sommelier Craig Cupidco, a flower-themed tea (perhaps Protea), a Champagne tea with Jacquart or Veuve Clicquot, a local Boschendal sparkling or perhaps add Hendrick’s for a G&T tea.

What is now a 198-room hotel was opened in 1899 by sailing company magnate Sir Donald Currie, Chairman of the Castle Line. He desperately wanted to better his competitor, the Union Line, which had a Grand Hotel near Cape Town railway station for passengers sailing on its ships (in fact, in 1900 the two shipping companies merged to become Union Castle). There is an extensive amount of memorabilia lining corridors of the hotel, from paintings of historic ships to a 1900s era map of Cape Town showing the central Mount Nelson and Company Gardens. 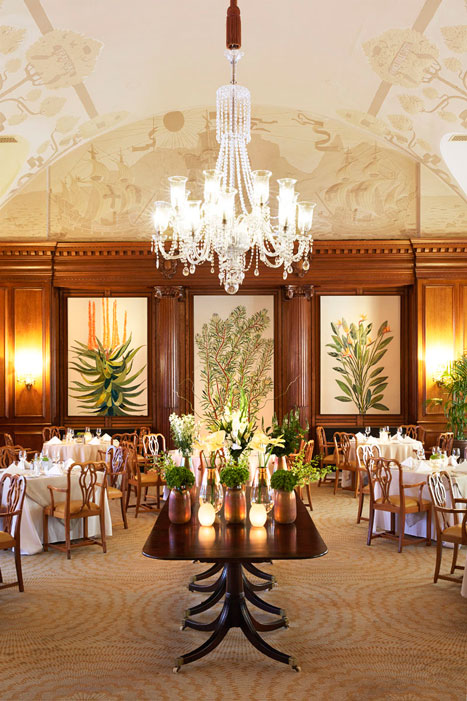 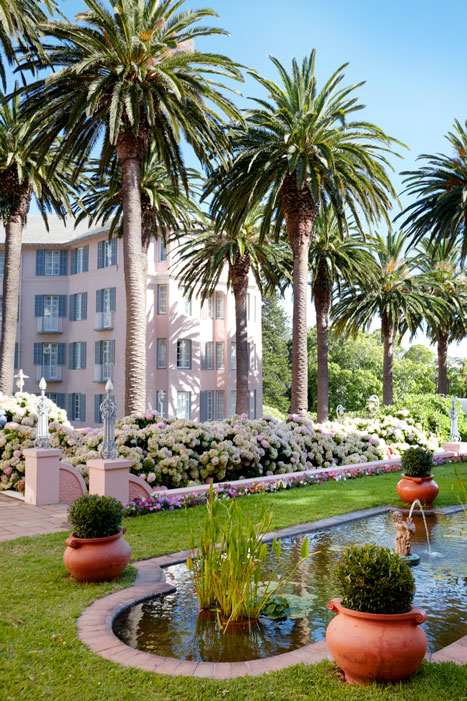 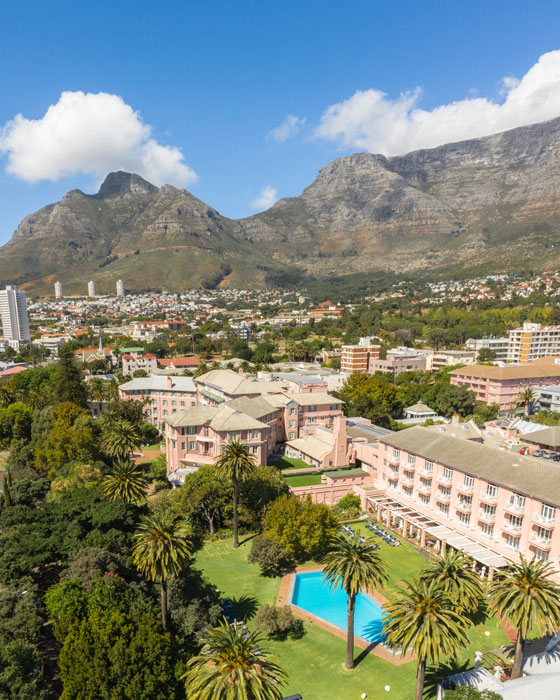 The 2.8 hectares of gardens also have stories to tell. Some of the hotel’s bedrooms are in quaint late 19th century two-floor houses, side by side with individual gardens. One such row, Sydenham Terrace, is next to the adult-only outdoor pool.

The 24-hour Technogym occupies the ground floor of a house in another terrace, just behind the spa. I do admit it was my first visit to the spa and it was sensational, a truly world-class facility, beautifully designed and really professional (I was having a quickie manicure and they fitted me in on the same day, which was jolly nice of them since they were almost fully booked, mostly with massages and roughly half-half hotel guests and locals).

In addition, this was my first visit to the new-look Lord Nelson Restaurant. General manager Xavier Lablaude was away but his director of operations and food specialist, Willem du Toit, explained that the two of them alognside chef Rudi Liebenberg – an organic and micro-farmer fanatic – had decided it was time to go back to the culinary future. The result was such that every table was taken. This is the place for classic steak tartare skillfully made table side and such national dishes as springbok loin with Jerusalem artichoke and, of course, a local Pinotage – in this case Rijk’s 2015 Touch of Oak. Yes, they know what they are doing when it comes to both food and drink, and there is occasional dinner time entertainment from a renowned singing duo, soprano Lisa Engelbrecht and mezzosoprano Lindsay Thompson.

One day I lunched desk side, off a green salad with extra avocado and, of course, I just had to make a G&T from my in-room supplies, namely Pink Lady Cape Town Gin and Fitch&Leedes rose-flavoured pink tonic (I left the pink macaroons). Naturally, afterwards I needed lots of exercise at the two outdoor pools and the 24-hour Technogym. I also did several forced marches up and down the sloping main drive, about 500 metres long: I looked up to Table Mountain one way, and down through the hotel’s ceremonial entrance arch to Company Gardens the other. As I strode I was flanked either side by a guard of honour of the 80 Canary Island date palms planted in 1925 for the visit of HRH The Prince of Wales.

A year earlier, in 1924, Cape Town had built a 57-metre-tall silo complex to store grain for transport to Europe, Today, these host Cape Town’s newest hotel. The area is minutely preserved by authorities, but the powerful philanthropic body V&A Waterfront realised that the building would make something truly unique. Thomas Heatherwick, one of the world’s most creative designers, has cut into the silos to make a museum. The integral 11-floor rectangular building, which had to keep its main shape, is now the suitably named The Silo Hotel. At top is a glass-sided swimming pool and – another a few steps up – a glass-sided platform for 360-degree views of Table Mountain, downtown Cape Town and, immediately below, the waterfront. 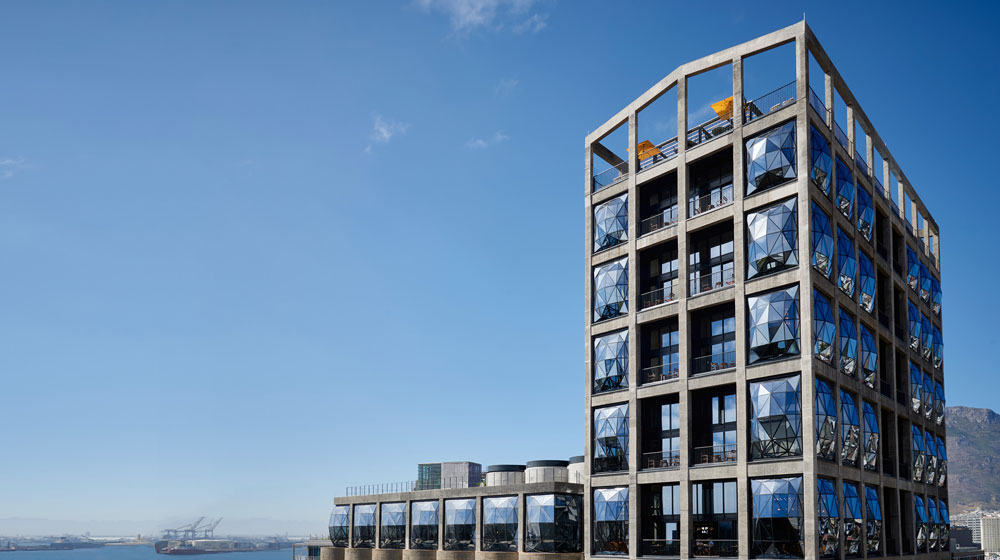 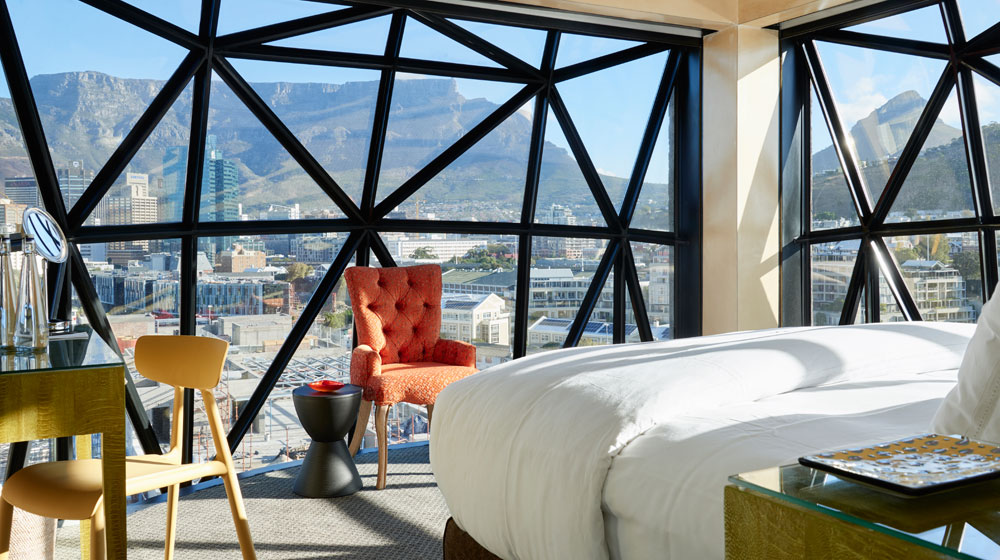 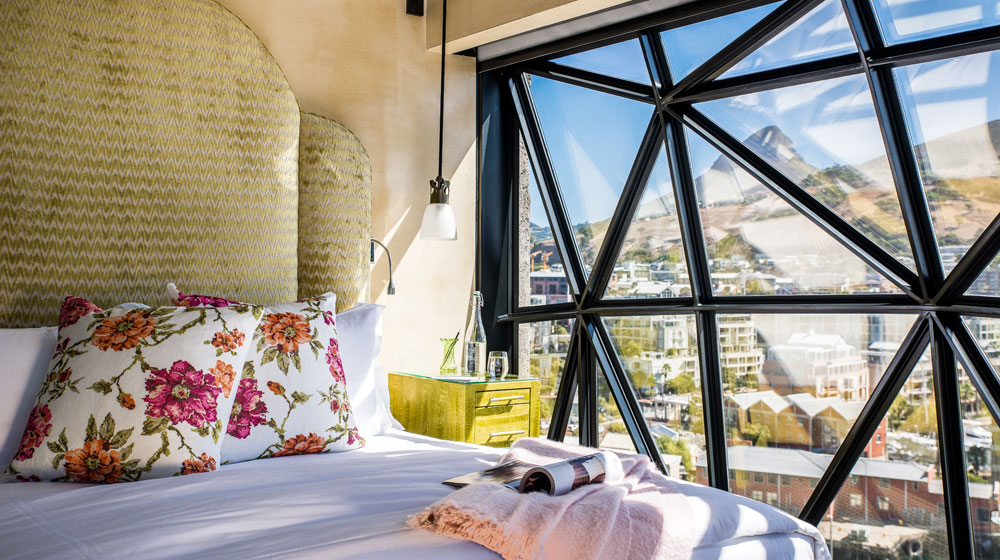 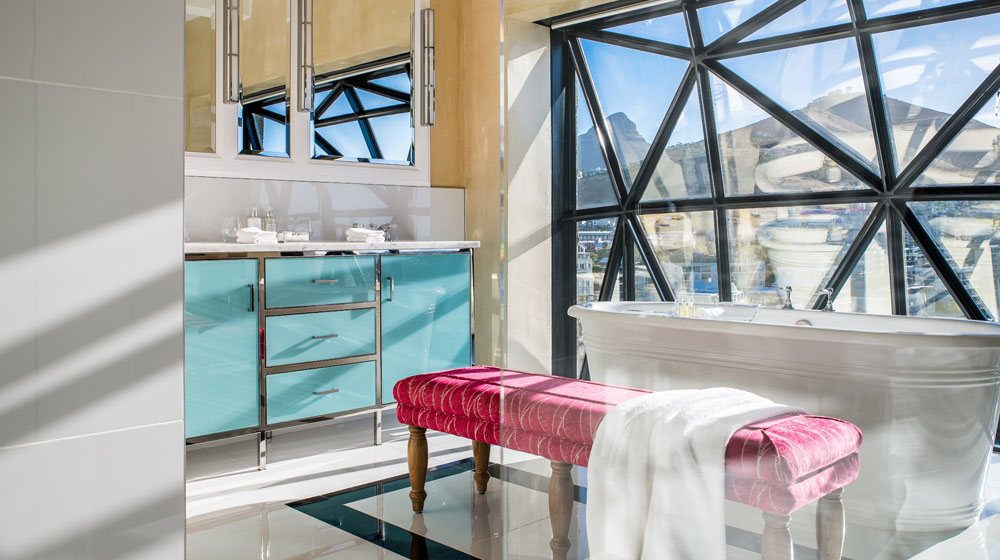 Heatherwick was able to insert sizeable, multi-faceted windows into the hotel area. All 28 rooms are at least six metres high and at night white blinds come down, turning some into what would seem like giant upright coffins were it not for the colour. Each bedroom is unique. Designer Liz Biden, the face of her family’s Royal Portfolio, is exactly the opposite of the ‘school of taupe’ – those designers who work in 50 shades of mushroom. Ms Biden does bold, with a fuchsia closet here, a dayglo lemon sofa there and one-off bespoke artworks that each make a statement.

It has many points in its favour. One is the general manager, the highly respected and experienced Luis Pinheiro, whom I first met at Lapa Palace in Lisbon many years ago. Here, he has compiled and trained an orchestra of staff that performs like the Berlin Philharmonic. Our server at lunch was formerly teaching in his native Zimbabwe – food, by the way, is another strong point. We started with seeded homemade bread rolls and I went on to the most beautiful beetroot terrine on a fresh pea coulis (yes, more colour!).

And, of course, a big plus is that the hotel is conjoined with the Zeitz Museum of Contemporary African Art (MOCAA). Heatherwick has literally sewn through the insides of the silos to create a memorably awe-inspiring ambience. This is such an amazing museum, indeed, that it is by itself a reason to put Cape Town on any itinerary. 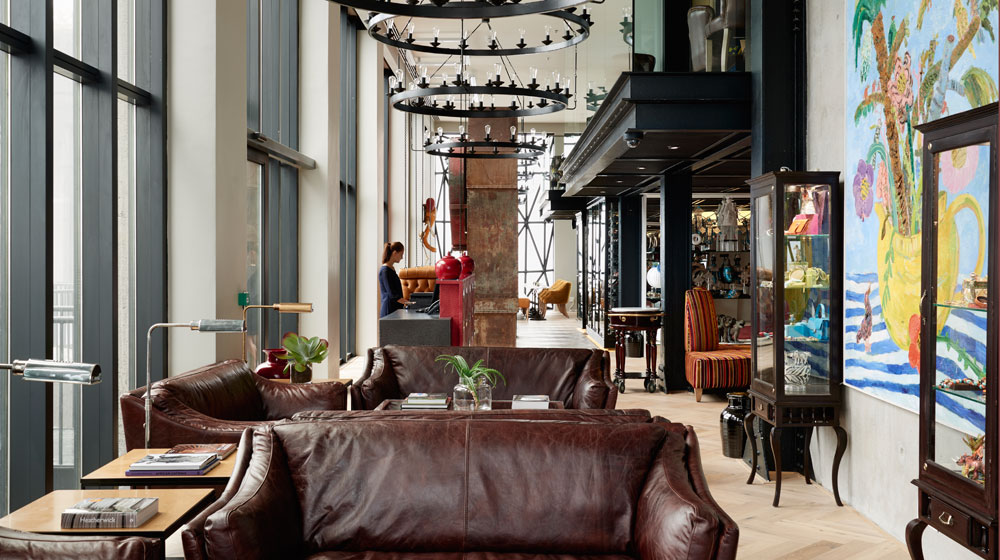 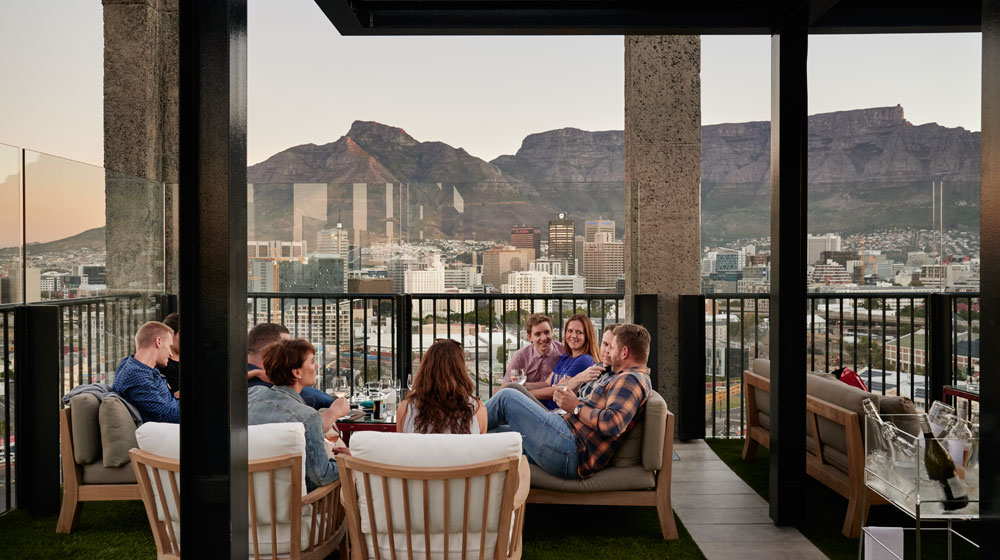 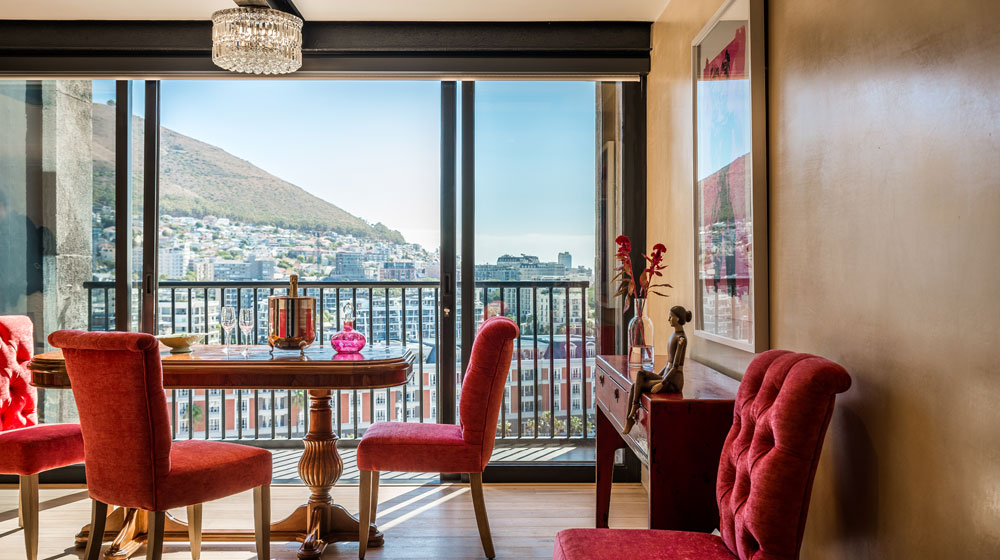 I called by at its opening at 10am and I was instantly impressed by the professionalism and friendliness of the entire operation. I took one of the elevators up to the sixth floor, where a restaurant would soon be doing good business. I walked down the stairs looking at exhibits on every floor. I had thought many of the items on show might be traditional fabrics or masks but remember the collection’s name, CONTEMPORARY. 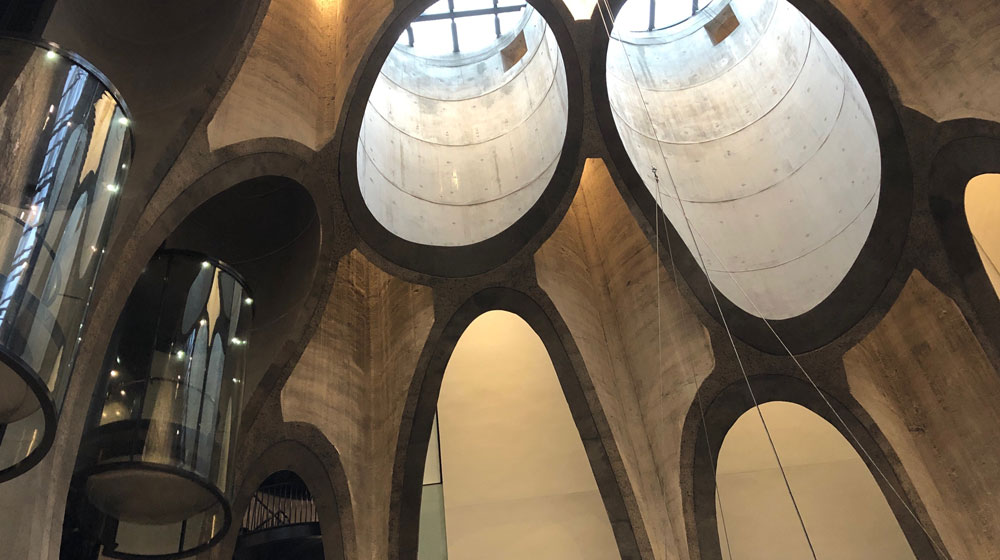 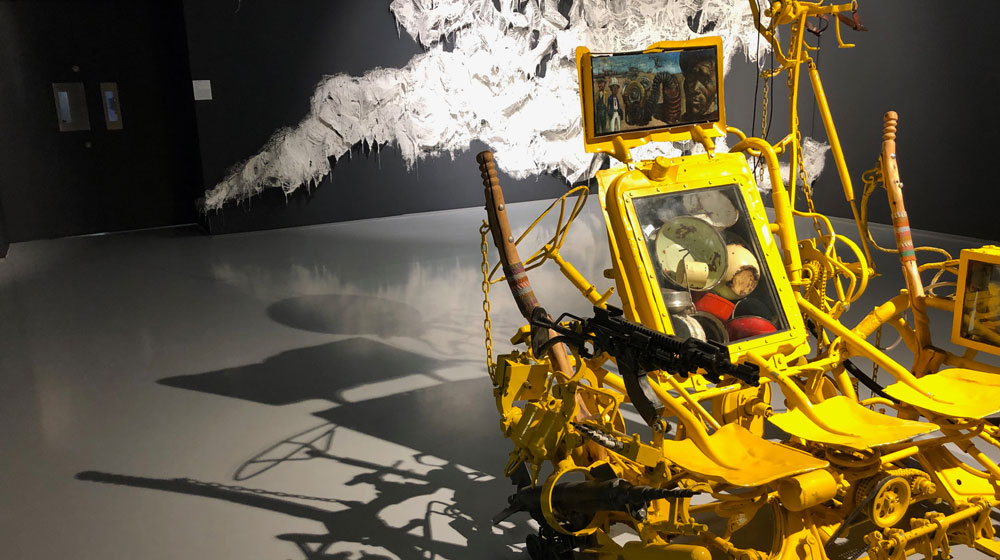 These are pieces collected over the year by Jochen Zeitz, the 56-year-old German who ran Puma at 30 and transitioned to new Puma owner Kering in 2011, as well as co-founding the B-Team sustainable initiative he personally started the ZeitzFoundation for Intercultural Ecosphere Safety to support sustainable solutions that balance conservation, community, culture and commerce. His African art collection is unlike anything I have ever seen. There is, for instance, a series of photos that look like paintings of people in fancy gear wearing eye glasses that look like sculpted saucer rims – this is 33-year-old Kenyan Osborne Macharia’s vision of a fictional posse of opticians wearing night vision specs to fight the Mau Mau. I also loved a day-glo yellow ceremonial throne formed from discarded bits of farm equipment. Yes, yet more colour.

Mary Gostelow enjoys a drink, and a pickle, in the English…