Time to see what a boutique-sized luxury hotel at sea is like. I chose Ponant – named for ‘look west’, the opposite of Levant – that is actually more like private yachting than standard cruising. I took a week-long cruise, Treasures of the Mediterranean World: a Family Learning Adventure, on the good ship Le Lyrial, named after the constellation Lyra. Le Lyrial is registered in Mata Uta, capital of Wallis and Futuna, it is 2015 vintage, 142 metres long, seven decks high, and it has 122 cabins.

Its 244 crew are led by a blue-eyed captain, Christophe Colaris, who was with the company when it started 1988 (though he took a prolonged break to be a maritime pilot in Guadeloupe, returning to Ponant, by then owned by the Pinault family, in 2017). Now, when he has his two months’ break every three months he merely goes long-distance gliding from his home near Avignon.

Ponant’s seamless service, the best in the industry, starts long before a voyage. I was sent a proper bound welcome booklet, personalised on the cover and inside. The booklet had welcomes, with photographs, from both Ponant CEO Jean-Emmanuel Sauvée, and the captain (most cruise companies never tell you these names beforehand). I also learned the exact itinerary, and the history of Ponant.

The trip started the moment I flew into Rome. I was met airside, had a private car to the hotel, where all passengers on a Ponant USA programme had a welcome cocktail buffet, and, the following day after breakfast, we were bussed, with our luggage, to tour the Colosseum. After a deliberately leisurely lunch at Tanagra, by the flowing Tiber, we all arrived at the ship in plenty of time for safety drill and 6 p.m. sailing. Interestingly, as well as the Ponant USA programme, which included 27 youngsters plus two board members of the Archaeological Institute of America, there was also a group from The New York Times who, led by Arthur Sulzberger Jr, chairman of the paper until 2017, who did their own thing throughout.

Of course I quickly checked out the gym, which had three runners, three bikes and a rower, all Technogym, a Kinesis wall, and big windows offering stunning views. Best things were, unusually for cruising, it was open 24/7, and on the fifth deck, just along from my temporary home. Cabins, called Staterooms or Suites, are 18-45 square metres, and 95% have balconies.

I was in #503, an 18 square metre Prestige Stateroom, with four square metre balcony holding two armchairs and a table. It was plenty big enough for one, or for two people – a screen pulled across the bathing area for privacy. Actually, I loved having that all-glass wall between bedrooms and basin-shower (the toilet was properly enclosed): I also liked designer Jean-Philippe Nuel’s use of curves, vertically for the corner of the bathroom, and on the edges of the main drawers. There was plenty of storage space, and I had enough wood hangers for an entire Gucci wardrobe (interestingly, the toiletries are Hermès, the most important brand that has eluded both predatory French fashion giants, although LVMH did have a small stake for four years). I had a bottle of Veuve Clicquot (LVMH) and fruit was replenished daily, though interestingly I was never told the name of the cabin attendant. 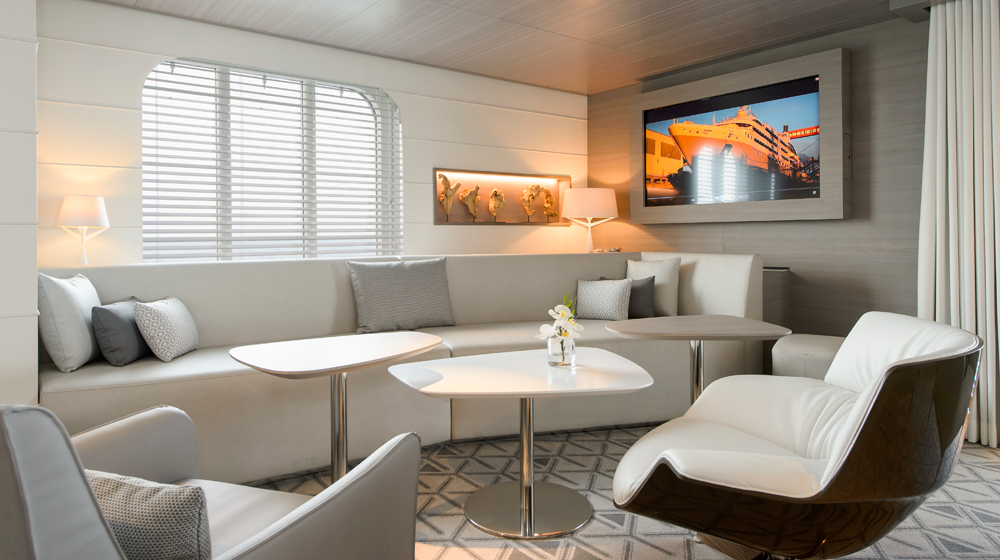 She was Filipina, like nearly all the housekeeping staff, though some were Indonesian. She had the sense not to reprieve the artificial orchid, banished to obscurity behind my umbrellas. I loved the sound quality of the Samsung television: listening to Bizet’s La jolie fille de Perth – Sérénade et Marche, London Symphony Orchestra conducted by Claudio Abbado, was sheer bliss – as was listening, live, to the Ukrainian pianist, Andrey Shabala, playing on the ship’s perfectly tuned Steinway, especially when he began a post-dinner concert with Beethoven Sonata 21. One of the main differences between static hotels and always-moving cruise ships, incidentally, is that most hotels, unless they happen to be on a distant island, can call in someone to tune a piano or get an out-of- order jogging machine in the fitness centre to start working.

Sep 17, 2020
Prev Next 1 of 1,618
Tweets by LATTEluxurynews
Subscribe to the LATTE enews
Enquiries

Mary Gostelow dreams of the ultimate luxury game lodge in…