The reasons the 220 passengers had chosen this cruise were myriad. Tempted by the cruise theme, Treasures of the Mediterranean World: a Family Learning Adventure, many were family parties, typically three generations. Others were there because they joined a New York Times special, others were followers or board members of the Archaeological Institute of America. But there was a common link: all were enticed by the quality and luxury offered by the Ponant boutique cruise line, as well as the chance to learn about ancient history. It was an intriguing itinerary. We started off in Italy, mooring in Salerno for Herculaneum and Pompeii. Herculaneum was discovered in 1738 and Pompeii – or Pompei, either way it means ‘five villages’ – 10 years later. We had a memorable day, slightly marred by a prior visit to a tourist-oriented cameo factory (who wants cameos these days?).

I also choose to forget that, between the two brilliant archaeological sites, we had what could well be the worst lunch experience in the whole of Italy at a food ‘factory’ outside Pompeii which served unidentifiable protein and the wine glasses remained unfilled.

The guide in my group, a forever young and excellent 59-year-old extrovert, Antonella, told us how the Vesuvius eruption in 79 AD took 19 hours to layer 20 metres of ash, rocks and lava everywhere. As evidenced by motley collections of skeletons jumbled anyhow, anywhere, the people could not escape. They were literally overwhelmed. 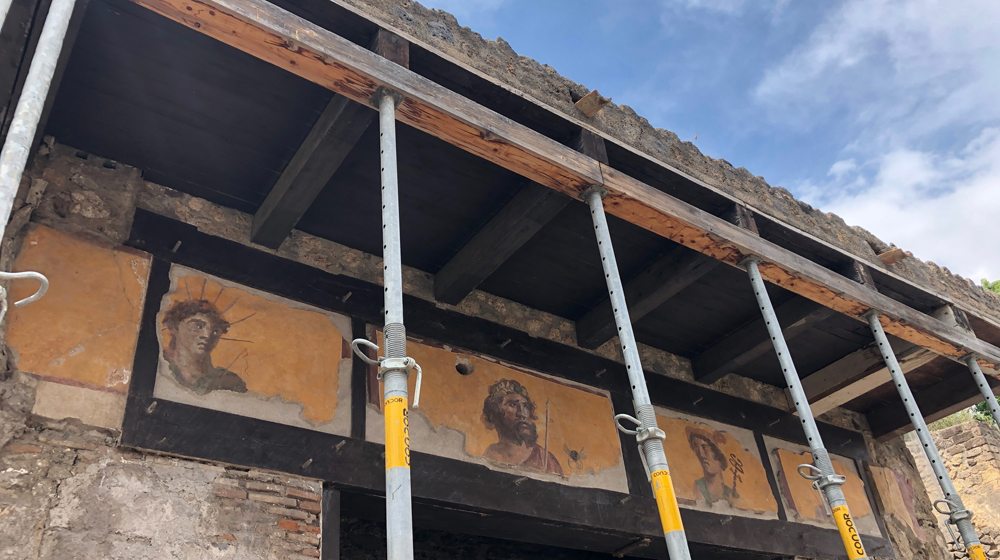 Herculaneum, then by the sea, was the richer of the two conurbations: it had a sewage system and the houses were larger with big gardens and separate kitchen areas at the far end. What did they eat in those days?  Some of the younger members of my group turned their noses up when Antonella listed garum, sun-fermented fish. They also ate dormice. We saw fragments of blue marble from Afghanistan at Herculaneum. Now, thanks to the eruption and the passing of time, that prosperous area is inland. Pompeii, never by the sea, was not so rich.

Pompeii had no sewage systems, so streets had raised sidewalks with big stepping stones to get across the omnipresent ‘muck’. The challenge with two memorable sites in quick succession is to remember which place is which – the same thing happens in Japan with Hiroshima and Nagasaki, both of which are gut-wrenching emotional experiences. Here my impressions of Herculaneum and Pompeii have already blended, but I have an overall memory of a fruitful quince orchard and, at Pompeii, of the gladiator school, the bath house and the brothel street. And everywhere, frescoes and more frescoes. We saw so much in one day. By the way, the kids taking part in Ponant’s Young Explorers program loved their day. They did a shortened Pompeii, plus visited a highly-productive small, family-run farm and learned how to make pizza. 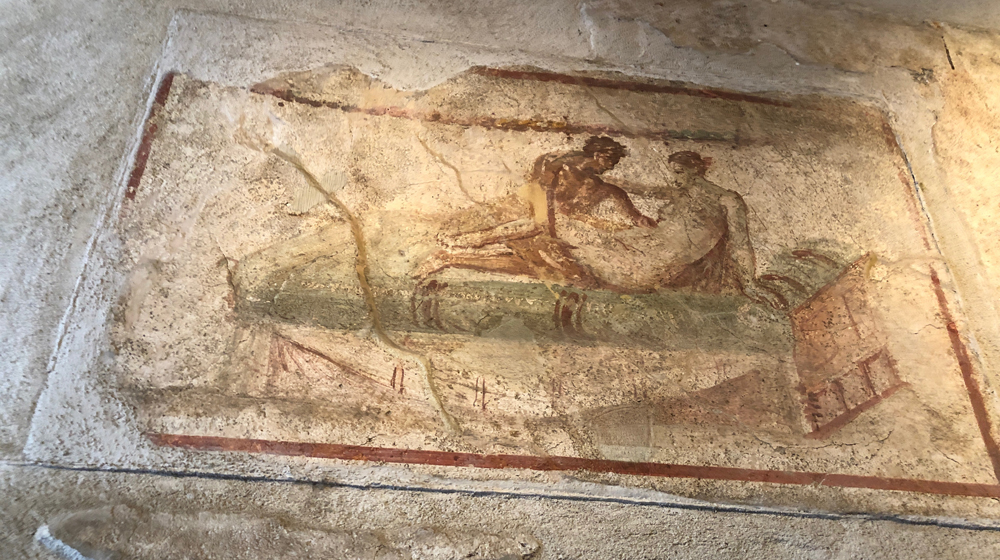 The food in every restaurant onboard was superb, and since the line is French it is safe to assume all 144 crew eat magnificently, too. Officers are offered European cuisine, but in the main mess there are lots of Asian dishes to please other tastes. All sourcing is done at the beginning of a trip, in this case Rome, with some top-up of fresh produce along the way.

Hotel manager Sylvain Zurita, from Savoy, is a real foodie who has worked at such place as The Brando in the Pacific. Here, all breads, apart from croissants and Danish, are freshly baked onboard. Butter is Bordier, who also provided the final night’s gargantuan cheese tables. Breakfast buffet fruits always had about 10 choices, with blueberries one day and mango the next, as well as good juice selections.

To show how much Ponant cares for the foodie market, it has some big-names – French, of course – onboard a Gulf of Panama cruise starting 23 Octoberr 2019. The list includes Four Seasons George V Paris chef Christian Le Squer, plus global sommelier winner Philippe Faure-Brac and someone representing Restaurant Alain Ducasse at The Dorchester Collection’s Hôtel Plaza-Athenée, Paris.

Generally about 10% of passengers request special meals, but there was always so much choice. As well as the sixth-deck buffets, inside or pool-side, you could breakfast or dine à la carte on the second deck (I loved going down there for the rib eye, always available). Two quasi-formal nights, the Captain’s welcome and the Captain’s farewell, saw the à la carte switch to five-course set gourmet, which I avoided in favour of buffets. Main alcohol is included, say 2018 IGP Pays d’Oc La Tête D’Ailleurs and Heineken, but you can pay €20 a day for Pass Premium, which allows unlimited consumption of pay-for alcohol, including Corona and fine blends chosen by whisky specialist Patrick Mahé. There were three bars, with the one on deck six doubling as the library that I sadly only discovered on the last day (it also has two computers with a printer, but free Wi-Fi in my cabin was generally excellent, depending on satellite efficiency).

Ponant really looks after young travellers. The Kids’ Club onboard always seemed to be busy and there were one-off events, like a cooking class in the main lounge one day. The ship spent a day in Katakolon, in Greece’s Peloponnese, so we could visit Olympia, where the Young Explorers took part in a relay race (one adult had to accompany their youngsters). We older folk learned that, to ancient Greeks, those that spoke another language were called barbarous. Greeks considered that a fit body meant a fit mind, kalokagathos, which led to excellence – kalokagathia is the ideal of gentlemanly behaviour. Olympia was one of four centres to hold games every four years and the winner was given an olive wreath by Nike. Anyone who cheated had to pay for a life-size bronze statue to stand in line at the entrance to the Olympics called ‘zanes’.

I loved the outstanding museum at Olympia and also, among the ruins that extend over 54,489 hectares, the remains of a hostel dating back to about 330 BC – and yes, even in those days there were two sizes of rooms. My new archaeological friends toured ruins day after day, inspired by our onboard archaeologist, the magnetic Dr Kathleen Lynch, who heads the classics department at the University of Cincinnati.

The last port of call was Kusadasi in Turkey for Ephesus. As well as Greek and Roman ruins, this site has many Christian connotations – it is one of the seven Churches of Asia mentioned in the Book of Revelation and the Gospel of St John may have been written here. As always, Dr Lynch was not able to be our on-site tour guide as the ‘official’ tour guides would get upset, but those in the know made sure at every stop to be near Kathleen so we could ask her discreet questions. Interestingly, she started out in medical school but was lured to archaeology. At one of her onboard talks, by the way, she showed how many ancient symbols are used as logos by today’s companies. The lyre of Apollo is the motif for our Steinway piano and TripAdvisor uses Athena’s owl of wisdom. 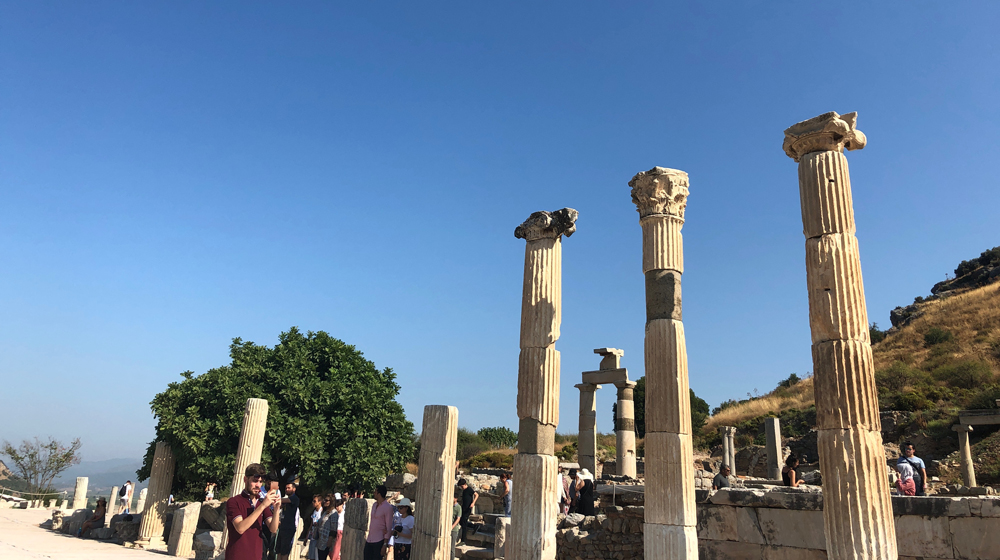 Athena, also referred to as Athene, is goddess of wisdom, courage, inspiration, civilisation, law and justice, strategic warfare, mathematics, strength, strategy, the arts and crafts, and skill. I personally learnt so much from the onboard talks and every day land tours. At Ephesus, for instance, the river Meander twisted and turned, which led to the word meander. The original marble-slab roadways, most of them quite steeply sloped, are still extant and they are incredibly slippery. Walk down and you pass obviously needed signs with telephone numbers for emergency medical help. Many of the statues along the way are in remarkably good condition. Scratches on rocks show an ancient shopping list, including hazelnuts, small figs, barley, onions, and caraway.

And then you come to a giant tent, covering some 4,000 square metres. Supervised by Austrian archaeologists, this protects ruins of three-floor houses built into the mountain side – names of sponsors include the hotel conglomerate Dogus paying for renovation of room 12. The end of our day was an informative presentation in Kusadasi bazaar by a family-owned carpet company, Heirloom. It was fascinating to watch how silk direct from the cocoon is spun and dyed. I had seen many demonstrations of carpet knotting elsewhere but what took my breath away was the beauty of some of the finished carpets, especially those that had at least some silk (there were also carpets with bamboo fibres).

Farewell to an incredible journey

The penultimate night onboard was the standard Captain’s Farewell, where typically at sea the Captain introduces a selection of all the staff and passengers thank and cheer them. Usually, on other lines, this takes place inside in a ship’s theatre, but here it was purposely held outside at sunset. The Veuve Clicquot toasts were genuine, and judging by the appointments with the onboard directors, many passengers have already booked more journeys. Ponant has a partnership with the Louvre and I would be particularly excited by the 10-day trip, on Le Lyrial, Cultural Jewels of the Adriatic, Athens to Venice, from 14 August 2020 (by 2021, by the way, the Ponant fleet will have doubled in size to 12 ships).

But now it was time, in Piraeus for Athens, to disembark. For the first time in my cruise experience Captain Christophe Colaris was at the top of the 26-step ‘gangplank’ personally to thank and say goodbye to everyone. Passengers then had a full day of Acropolis and Agora archaeology. Since Kathleen Lynch is vice chairman of the managing committee of the American School of Classical Studies in Athens, she was still working, finally being able to lead one of the groups. Then, after a Greek taverna dinner, it was overnight in a Leading Hotel and, on the morrow, escort right to the airport.  Seamless service, start to finish. 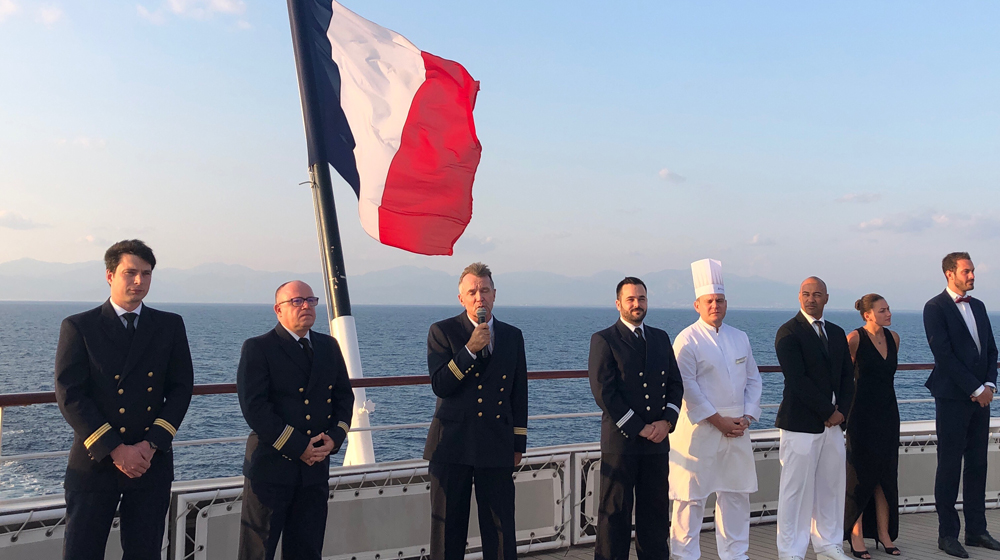 May 27, 2020
Prev Next 1 of 1,548
Tweets by LATTEluxurynews
Subscribe to the LATTE enews
Enquiries

Mary Gostelow heads for the Greenwich Hotel in Downtown New…

Mary Gostelow goes to the most unique ranch in the USA