Girlahead gets upclose with Fairmont sisters

Accor’s Co-Deputy CEO and head of the company’s luxury brands, Chris Cahill, beams when talking about luxury. To bring them up to date, some of the heritage Fairmont hotels have seen astronomical spend, which should result in double-digit increased rate but double-double customer satisfaction. I went to see two of Fairmont’s heritage ‘railway hotels’.

Fairmont Queen Elizabeth, Montreal’s anchor hotel above the main rail station, is where, in 1969, John Lennon and Yoko Ono held their famous Give Peace A Chance love-in, in suite 1742. Since then things have moved on and up, fast. There is a commemorative all-wall photo of the pair in the lobby, but the real art is truly sensational: even the stunning and airy 21st-floor Fairmont Or lounge is a gallery of modern art and sculptures (I especially liked a 75-centimetre-tall Escher-like steel model, Révolution 2010, for Michel de Broin’s real-life five-floor-high staircase at the Jacobin Convent in Toulouse, France). The hotel re-opened in 2017 after a Sid Lee renovation that could well have cost over CAD$150 million. This included not only spending on art but on all rooms and public areas.

Interestingly, management has converted the third-floor bedrooms to CoLab 3: a collection of small-size meeting rooms. Each one is unique; these rooms have such names as Ping (yes, that room’s carpet is grass-green and the communal meeting surface is a ping-pong table) and Swing (with two ceiling-hung swings semi-hidden in an alcove). The hotel’s GM, David Connor, who also heads Accor for Eastern Canada, reckons the new concept spaces more than compensate for losing bedroom revenue. He still has 952 rooms and suites to fill every night, which, with an average stay of 1.2 nights, means an awful lot of check-ins and check-outs every day. There is now, fortunately, a massive exaggerated-typeface artwork, Alexandre Berthiaume’s Typospective AI 2017, occupying the entire wall behind reception to look at, in case you have to wait 30 seconds. There are also special events in the lobby. As a sponsor of the men’s Coupe Rogers 2019 tennis tournament, the hotel not surprisingly had game-related displays, and rangy muscular-calved guys, in the lobby.

But the entire lobby has changed. The inner-circle Beaver Club gourmet restaurant is now Agora, an open space for displays and meetings. Whatever may have been there before is forgotten, but the new Artisans gourmet supermarket is sensational, like a Dean & DeLuca meets Whole Foods, right in the hotel: I bought a cobb salad there; it was made on-site and tasted good. From here you can circle round to the new all-day eating-drinking venue, Roselys (named for the rose of England and the fleur de lys of France). This is so modern, with different heights and types of seating. Why go out when you can eat and drink so well here?

There is also a coffee corner, Krema. Yes, the temptation was to sign up Starbucks, says the canny David Connor, but every Tom, Dick and Harry does that. Far more impressive is to work with local coffee companies and perfect something just right for this so-well-established hotel, where top executives meet and stay as a matter of course during the long months when Montreal is a business and convention centre. And when those stalwarts go on vacation, some return with their kids, rooms become family venues, and the hotel’s operations adapt accordingly. That flexibility is just one sign of a luxury hotel, and its staff.

And then I took the train to Toronto, just under five hours door-to-door, or rather under-hotel to under-hotel, in this case, Fairmont Royal York, Toronto. Well, well, well. The old nursery rhyme describes how the grand old Duke of York marched his men up and marched them down, and the 90-year-old dowager that is Fairmont Royal York has had a past of up times and not-so-up times but honestly, after a new-look investment of hundreds of millions, without closing, she has been as high as Everest. 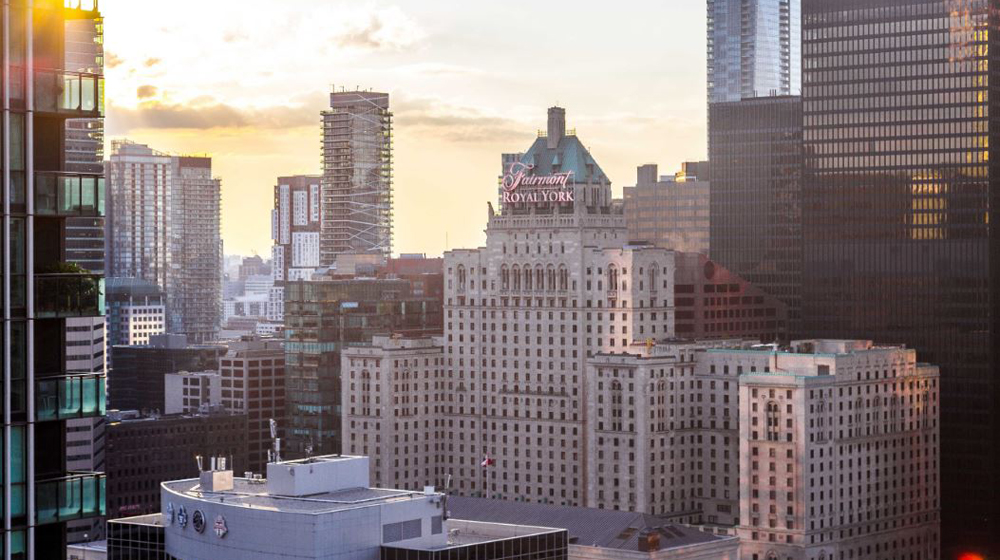 So many remember the mausoleum of the lobby, dominated by a floor-standing clock. Now, redesigned by Rockwell, a giant clock looks down on what is a brilliant and so-popular lobby bar, CLOCKWORK Champagne & Cocktails. Alexandra Champalimaud, whose Raffles Singapore renovation has also just opened, has done the completely new club lounge, taking up all of the 18th floor, and the new Fairmont Gold rooms bedrooms.

Her style is so recognisable, namely chic and sleek, white and bright, with lush fabrics and considerable use of soft blues. The Fairmont Gold lounge has so inspired all those working there that they seem to smile, nonstop. The same can be said of Fairmont Gold guests, who are spoiled for choice as there are so many sitting areas, with two, four-metre-long gas-fuelled fires and a library with really covetable hardbacks. But, it is important to say that the tradition of the Royal York has not completely disappeared. Gorgeous stylish tabletop china, for instance, bears a suitable crest. Downstairs in REIGN bar, the Nikolaus Wilhelm Schimmel grand piano looks as if it has been here since the hotel’s first opening party in 1929.

The public celebration with Toronto’s mayor on 11th June 2019 and re-opening party on 24th June 2019 must have been amazing affairs– there were in fact three concurrent parties, one hosted by the Canada Fashion Awards (this is a country that loves sartorial specials; there is a four-day event coming up, starting 22nd August 2019, honouring African Fashion Week). There certainly is no shortage of the fashionable and the discerning, praising what has been done here at the hotel. Take the main restaurant, REIGN, like a series of small rooms in a big private house. I sat with the hotel’s GM Edwin Frizzell for a deliberately national dinner, East Coast oysters followed by Ontario lamb chops.

Edwin Frizzell, a frustrated designer of both interiors and landscapes, is frustrated no longer. Inspired to work in hotels by Arthur Hailey’s book Hotel, he started work on this renovation when he arrived here in 2014: for five years, just as a two-star Michelin chef awakes every morning dreaming of his third star, he has been working on this new look, travelling frequently with the hotel’s lead owner to talk to, commission and work with designers and suppliers. In REIGN, one bar area cleverly converts to a working bakery at breakfast time. The long desks for checking in and out have been subtly removed from centre stage by putting them three steps up and ten steps back, but either side there are elegant curved walkway approaches for those with wheelies or baby buggies. This whole luxury hotel is now a theatre, beginning to end.

Sofitel expands in the Philippines

Feb 25, 2021
Prev Next 1 of 1,701
Tweets by LATTEluxurynews
Subscribe to the LATTE enews
Enquiries

Mary Gostelow says you are spoilt for choice, every minute,…