They say that a little knowledge is a dangerous thing but the daily briefings and lectures given by the expedition team on board Silver Discoverer’s Bali to Singapore cruise, fleshed out my scant knowledge of the remote areas in Java and Borneo we visited.

Days on this ‘Indonesian Adventure’ start early, and as Lea our expedition leader reminded us whenever any groans went up at the announcement of an early morning start, “We’re on a expedition ship people!”

Gathered in the Explorer’s Lounge we learn about Indonesia being one of the most volcanically active countries in the world and part of the Pacific Ring of Fire. This is fodder for the following days when we’re up at sparrows to make our way up not one, but two volcanoes!

On arriving in Tanjung Wangi, in East Java we head off in a convoy of 4WD vehicles to tackle the mighty Ijen Volcano. Along the way people wave and aim their iPhone cameras as we pass through villages and rubber plantations until we reach the foot of the Merapi Caldeira to begin the strenuous hike to Ijen’s crater lake. 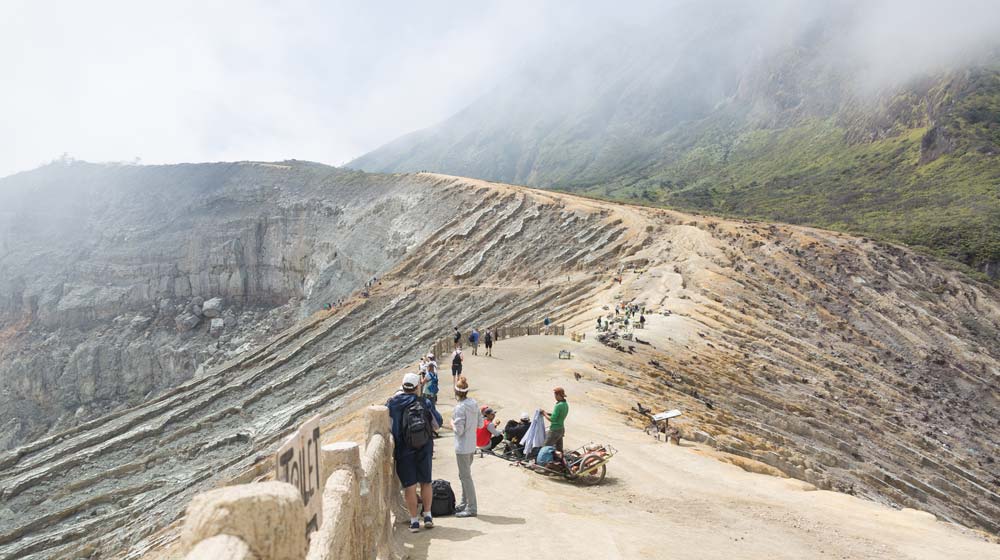 At four kilometres each way, and a climb from 1,800 metres to 2,300 metres above sea level, it’s no picnic in the park but the surrounding lush jungle, edelweiss-covered valleys and the patchwork fields that fill the ever-changing landscape ease the way.

Not so for the men who men toil at the one-kilometre-wide turquoise blue – and highly acidic – crater lake and carry baskets filled with weighty kilos of sulphur on their backs to the crater rim and manually trolley them back down the mountain. We are in awe.

At the end of the challenge and according to my iPhone’s MyHealth App, I climbed 104 floors, did 16,000+ steps and walked 11.3kms. A day that culminated at the spectacularly situated Ihen Resort, in the surrounds of terraced rice paddies for a buffet lunch and a performance by a local orchestra and dance group. 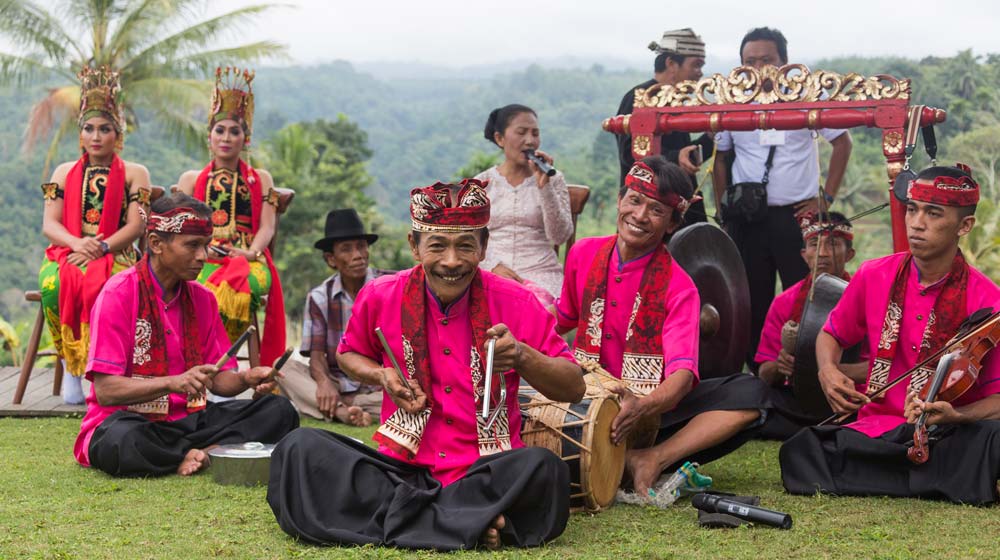 Another day and it’s Mount Bromo, an active volcano in Probolingo and not such a heart-thumping climb, at only 2,329 metres, as Ijen. With masks to protect us from airborne ash, we mount ponies on the caldera rim to be led by their owners across a plain of ashen, volcanic sand, known at the Sea of Sand, looking like extras in a Mad Max movie, before dismounting to climb the 250 vertical steps to Bromo’s smoke-filled crater. 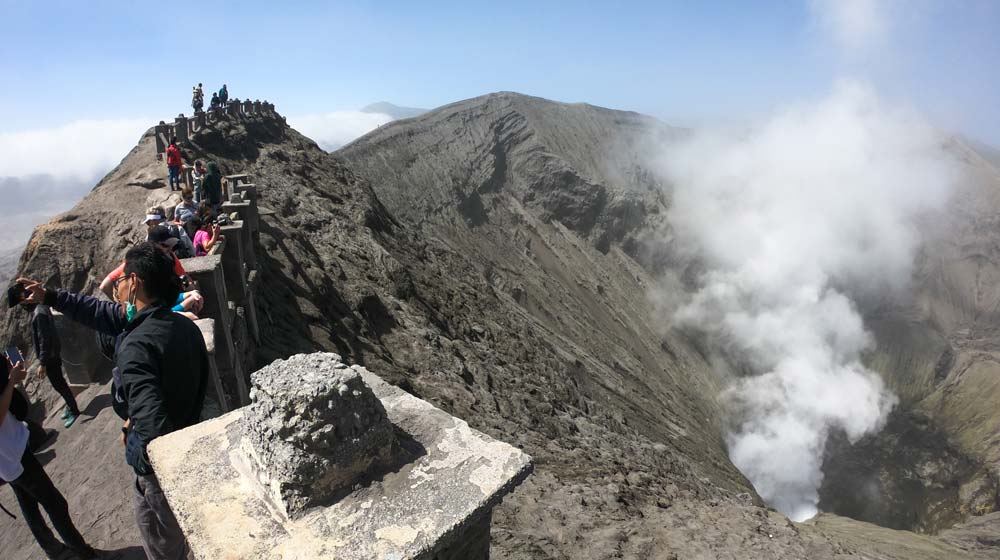 For all the volcano’s compelling beauty and terror we did enjoy days snorkelling in the Java Sea off two islands – Cemara Besar in the Karimunjawa Islands, small enough to walk around, and in a new destination for the ship, Lengkua Island, in the Belitung Regency, home to a arresting Dutch lighthouse, built in 1881 and standing at an sizeable 57 metres.

On these mornings the ship’s expedition team, when they weren’t in the Zodiacs spotting birds with some of the enthusiastic birders on board, set off on early morning sorties to scout for the best snorkelling spots and set up Zodiacs as platforms from which to snorkel. At the end of each day a welcome beach bar was set up on the sand for everyone to enjoy.

Good things come to those who wait and our visit to the UNESCO World Heritage listed Buddhist temple, Borobudur, in Central Java was something special. Built in the 8th and 9th centuries, it was a five-hour drive from the port of Semarang, where we were berthed.

Restored in the 1970s with the help of UNESCO, the temple’s creation stands unique among other Buddhist shrines with its extensive stairways and corridors leading devotees to Nirvana. The long coach journey there and back through heavy weekend traffic was eased with the help of a special police escort. 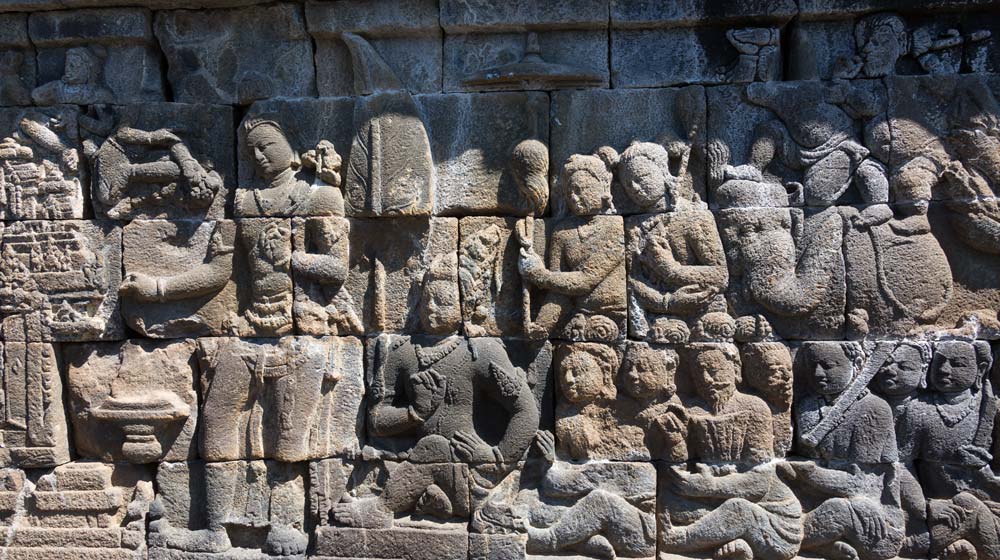 Our next port of call was Sumenep, on Java’s Palau Madura and a thrill-a-minute, seven-kilometre Zodiac ride through the sea to the shore.

Led on foot past handsome Dutch houses, reflecting the island’s former Dutch occupation, we found ourselves in the midst of a musical parade headed by a huge, stylised dragon and guided to Keraton Sultan’s Palace for a Sumenep dance performance and demonstrations on how to make traditional Batik and their distinctive Kris daggers. 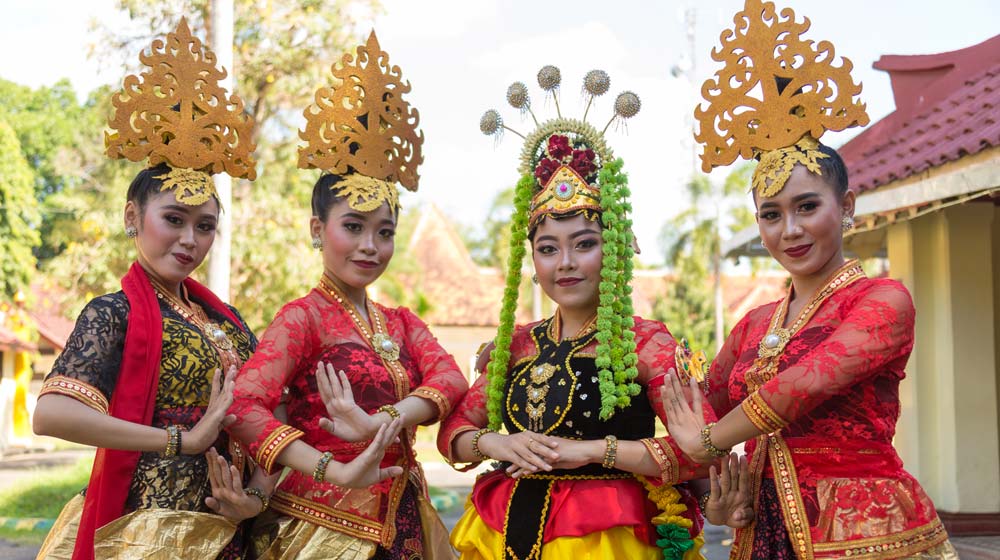 Then, for something completely different we headed to Madura’s most famous attraction: Kerapan Sapi, a bull race where only bulls of a high standard are entered, and where we watched as plough teams raced each other across an arid field. The Madurese keep their young bulls in superb condition, feeding them with an assortment of medicinal herbs, honey, beer and raw eggs. Here too, in a bizarre contest we witnessed a number of fine-looking and well-fed cows vie to be crowned the most beautiful.

Our arrival in Cirebon, a port city in West Java, was greeted by the spectacle of colourful, individual pedicab rickshaws waiting to deftly weave us through the city traffic on a ‘Heritage sites of Cirebon’ tour. It was one that included the colourful food markets and the Great Mosque of Cirebon built around 1480. Later we were invited to sup with the Sultan of Kasepuhan and his wife at the 16th-century Keraton Kasepuhan Palace where we joined them in a spot of sociable dancing.

That evening our special guest lecturer, primatologist Dr Biruté Mary Gladikis, joined us for the rest of the cruise.

Dr Gladikis is the youngest, at 73, of the late paleoanthropologist and archaeologist Louis Leakey’s trimates of Jane Goodall and Dian Fossey. She went to Kalimantan, Borneo in 1971 with Leakey’s support and today continues her pioneering field studies of the orangutan in the Tanjung Putting National Park, a project primarily instigated by her, for the protection of the Bornean orangutan.

At her lectures, Dr Gladikis highlighted the devastation to the Borneo Rainforest that has occurred since 1950, in the name of creating Palm oil plantations, and how this has led to the killing of orangutans by farmers who consider them as pests.

Camp Leaky, she explained, covers 6,090 hectares of forest, which has to be patrolled.

“We need to buy 100,000 hectares more, which we hope to do. Firstly, 10,000 but all this costs money to keep it out of the hands of the palm oil concessionaires. We are doing everything we can to buy up more rainforest land,” she said.

Camp Leakey! There is much excitement and expectation when we arrived in Kumai, at the mouth of the Kumai River and the gateway to Borneo’s Tanung Puting National Park. Here guests had the choice of two expeditions – an all-day adventure taking in Camp Leakey, a challenging 14-nautical-mile, two-and-a-half-hour Zodiac ride in the National Park to an orangutan feeding station, then a switch from Zodiacs to local covered Klotok boats, to continue up the river to enjoy lunch and along the way spot proboscis monkeys, gibbons, long-tailed macaques and colourful birds such as the beautiful Rhinoceros Hornbill. 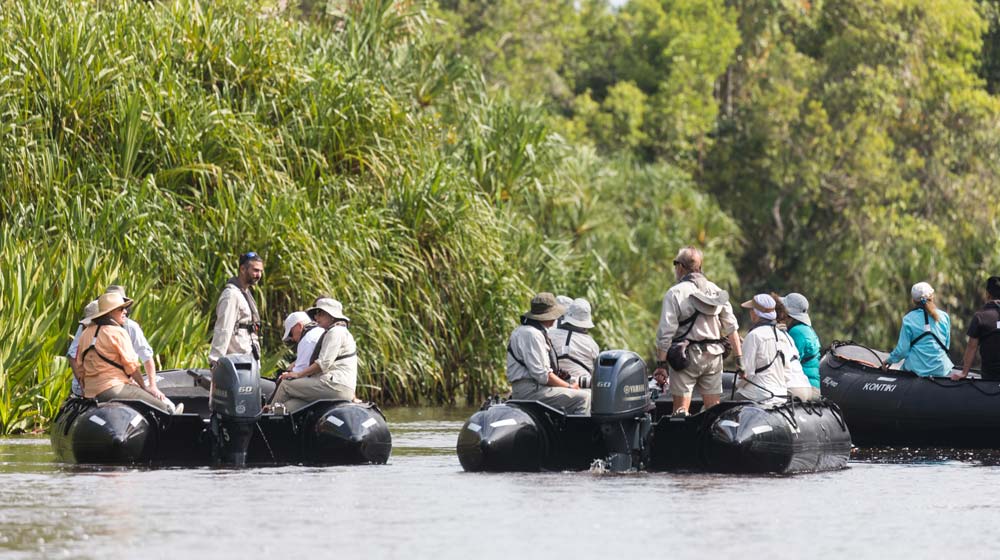 The other was a half-day trip to Dr Gladikas’s private Orangutan Rehabilitation Centre, which she created for confiscated ex-captive orangutans needing medical treatment, and for their preparation back into the wild.

You’ve got to hand it to this remarkable woman; despite the quite significant distance between the two tour choices, we marvelled that she was at each location to escort her guests. 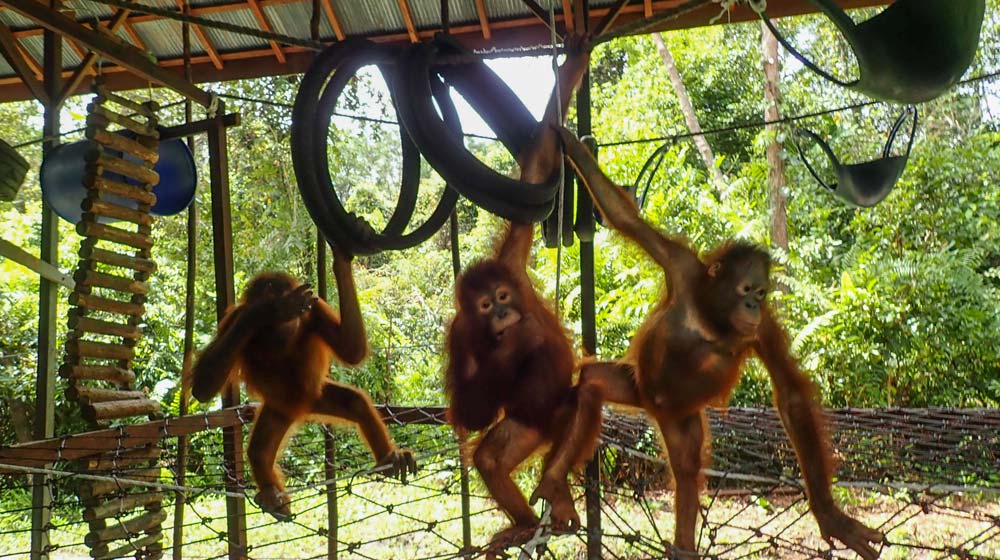 “I took the quickest route between the two options, by the fastest speedboat available,” she explained, laughing.

Passengers who went to the Orangutan Rehabilitation Centre in Pasir Panjang (not open to the public) had the opportunity to experience firsthand the hard work it takes to rehabilitate these amazing animals and to interact with some of the 300 wild-born, ex-captive orangutans. 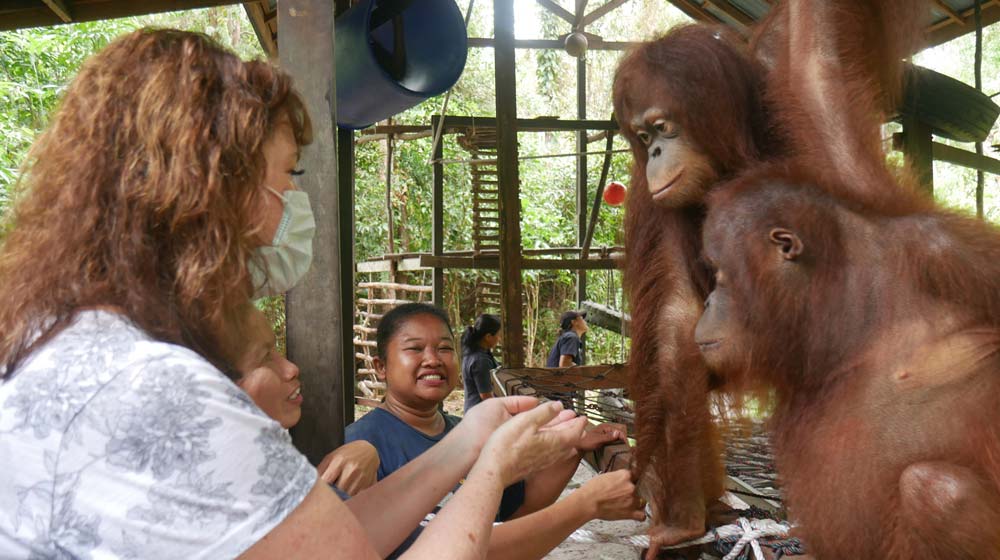 As one love-struck passenger remarked after her visit, “We had the most extraordinary experience with some juvenile and baby orangs when they were released from their enclosures. At first they moved cautiously towards where we sat, then losing their inhibitions they were upon us, removing our hats and scarves, peering under skirts and throwing their arms around our necks in a hug.”

For 12 days on this expedition cruise there was much to do, much to see and much to experience, but as all good things come to an conclusion, and with Singapore in sight and our disembarkation point, it was also the fond farewell to the Silver Discoverer as she leaves the Silversea Cruise fleet to join new owners.

We departed the ship with fond memories of a remarkable cruise, an attentive crew and a host of new international friends on Facebook!

Aug 3, 2020
Prev Next 1 of 1,584
Tweets by LATTEluxurynews
Subscribe to the LATTE enews
Enquiries