The Tourism Restart Taskforce has rebuffed suggestions that international travel to and from Australia may not begin until mid-2021, insisting that health conditions necessary to kick-start overseas travel should be “made clear” by the Australian government.

The stance by the Taskforce comes as Step 3 in the national roadmap to recovery – the mooted launch of trans-Tasman flights between Australia and New Zealand within a labelled travel ‘bubble’ – elapses.

“Notwithstanding the set back in Victoria, there was concern expressed now that July had been reached that the job of business reopening was done and that Australia was ‘back to normal’. In tourism, hospitality and events, Australia was definitely not back to normal both in terms of government restrictions as well as consumer confidence,” the group noted after its latest meeting on 3 July.

“The Taskforce stated strongly that a start back for international travel should not just be accepted as of July next year. The Restart timetable recommends the NZ/Pacific bubble should commence in July, other safe countries by September and international travel by 15 December.” 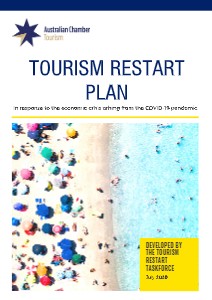 Those comments come as the Tourism Restart Plan was released last weekend. The 20-page document calls for clarity on the progressive opening of markets in the Pacific that share bilateral health agreements with Australia.

“Further openings are strongly encouraged by September. Most importantly, the Federal government is encouraged to provide industry an understanding of what the expectation is for source and destination countries to be included in travel bans being lifted and under what conditions,” the plan states.

At last Friday’s meeting, the group was also joined by the CEO of the Victorian Chamber of Commerce & Industry, Paul Guerra, along with the CEO of the Melbourne Chamber, Dianne Smith, who discussed the recent increase in COVID-19 cases in Melbourne. Among their concerns was the potential of pandemic restrictions, having already accounted for two school holidays periods, now encroaching on the September school holidays in the state.

Other key issues raised by the Taskforce included;

The Tourism Restart Taskforce plan to meet with Federal Tourism Minister Simon Birmingham at their next meeting, set for 17 July.

Dec 1, 2022
Prev Next 1 of 2,164
Tweets by LATTEluxurynews
Subscribe to the LATTE enews
Enquiries