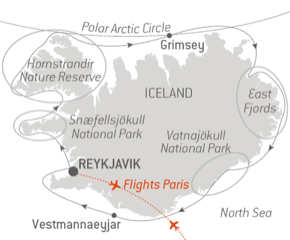 Ponant‘s resumption of cruising this month and next is set to include inaugural voyages for the recently launched Le Bellot. The ultra-luxury small ship cruise line is proposing a series of all-new expedition cruises circumnavigating Iceland, operating round trip from Reykjavik.

These voyages will showcase the Explorer Class luxury expedition ship, Le Bellot, the fifth in a series of six new ships that will make up the complete Ponant Explorer fleet. The sixth ship, Le Jacques-Cartier, was delivered just days ago (see below).

The 180-guest Le Bellot will explore the coast and shoreline of Iceland during a seven-night itinerary, revealing the island nation’s dramatic glaciers, fjords, waterfalls and volcanoes.

Voyages of the Wild & Secret Iceland itinerary listed online are earmarked for departure from Reykjavik on 17 and 27 July, and 12, 19 and 26 August 2020.

Highlights of this Icelandic itinerary include Vatnajökull National Park, a UNESCO World Heritage Site, and crossing the Arctic Circle to observe whales, orcas, seals and Atlantic puffins that make up some of the wildlife in this remote region.

Closer to home, Ponant also has three Best of New Zealand nine-night yachting (not expedition) itineraries also utilising Le Bellot. The Kiwi itineraries begin with a voyage from Dunedin to Auckland, departing on 12 January 2021, followed by a return voyage from Auckland to Dunedin on 21 January, and a final NZ sailing back to Auckland on 30 January. A range of special offers are in the market on these sailings, including flight credits, single supplement waiver and bonus savings.

Le Bellot is also scheduled to operate two Sub Antarctic Islands Expeditions (both from Auckland) that book-end the New Zealand deployment. These 14-night expedition cruises will operate on 29 December 2020 (returning to Dunedin) and on 8 February 2021 (returning to Lyttleton). Both sailings have an AU$2,000 per person flight credit offer attached to them, and are eligible for ‘Ponant Bonus savings’.

These cruises will explore the “Galapagos of the Southern Ocean” and visit Australia’s own Macquarie Island – a designated UNESCO World Heritage Site and home to tens of thousands of wildlife, some species of which are endemic to the region.

Following its second Sub Antarctic Islands Expedition, at some point, Le Bellot will sail to Australia where the cruise line will operate the already announced new Highlights of Southern Australian itinerary from Melbourne to Fremantle, which sets off on 27 March 2021. From there, Le Bellot will then be deployed to the Kimberley region.

Meanwhile, Ponant took delivery of its 12th ship, Le Jacques-Cartier, from the Vard shipyard in Norway last weekend. Le Jacques-Cartier is the sixth vessel to have been delivered to the cruise line in just two years – a world first, Ponant said.

“At a time of difficulty in the cruise industry, I am pleased to announce on Bastille Day that Ponant, the world leader in luxury expeditions continues to invest in the future with confidence, pursuing our growth strategy exampled by the launch of Le Bellot in March this year, and now the delivery of Le Jacques Cartier, the latest ship to join our modern fleet,” said Sarina Bratton, Ponant Chairman, Asia Pacific.

CEO Jean Emmanuel Sauvée added; “The delivery of Le Jacques Cartier is a success. It marks the completion of the PONANT EXPLORERS series, which has revolutionised the concept of ocean voyages. These six vessels combining cutting-edge technology and respect for the environment are the symbol of a new generation of ships flying the French flag.”

PONANT to deploy Le Jacques-Cartier to the Kimberley