Deep-pocketed Australians have the potential to breath new life into the flailing tourism industry, data from the Roy Morgan Research Institute suggests.

According to the research company, there are some 4.7 million cashed-up consumers in the country. Dubbed the “new economic order” (or NEOs), they drove the economic recovery following the Global Financial Crisis (GFC) in 2007, and are forecast to likely play a leading role in getting Australia out of the pandemic recession.

“Government support, particularly JobKeeper, has been important for the travel and tourism sector to date, but it is an emergency flotation device, not a path back to economic safety,” says Roy Morgan CEO Michele Levine.

“The evidence on the new economic order is incontrovertible. We tracked NEOs as they drove the post-GFC recovery and we’re already seeing them charge ahead in what will be a two-speed recovery,” Levine said.

NEOs are also more likely than other Australians to take a three-week trip over the next 12 months, spending considerably more than those who opt for weekend getaways.

Domestic destinations are the only travel option available to Australians for the foreseeable future, which works in favour of NEOs. In the year to March 2020, 76% of NEOs nominated their home country as the preferred destination for their next holiday. That’s 17 percentage points higher than the figure for the population. 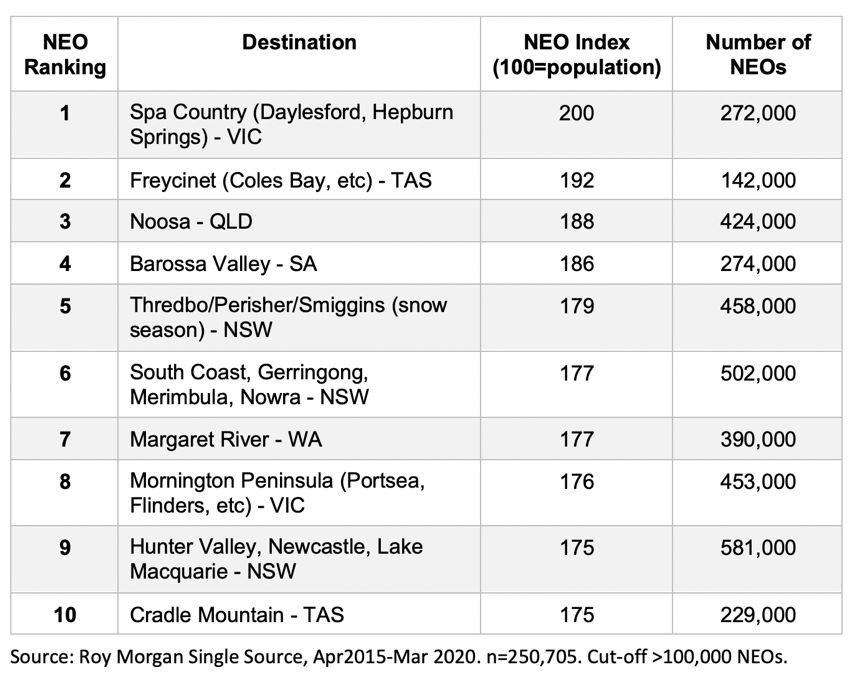 Tasmania’s Freycinet and Queensland’s Noosa were second and third respectively. Also in the top 10 was the NSW South Coast, Margaret River in Western Australia and the Hunter Valley in NSW.

Levine said that to appeal to NEOs it’s vital to “genuinely understand their thinking or mindset”, suggesting that discounting is not the solution.

“This requires discarding truisms about doing business in a recession, especially the push to discount.”

“To attract the big-spending visitors, travel operators need to find value-add promotions rather than just offering discounting,” she concluded.

Spencer Travel takes up the #ParisDCchallenge